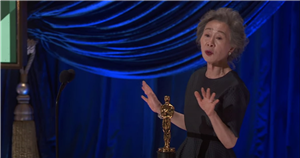 It’s been 63 years since Miyoshi Umeki became the first woman of Asian descent to win an Oscar for acting, and Minari‘s Yuh-Jung Youn just became the second with a win for best supporting actress. The 73-year-old actor also made history as the first Korean woman to win in an acting category at the Academy Awards. Not letting her history-making moment pass her by, Yuh-Jung started her acceptance speech by acknowledging Minari executive producer Brad Pitt. “Mr. Brad Pitt, finally nice to meet you! Where were you when we were filming?” she teased, as he was the category’s trophy presenter. When asked later what it was like, Yuh-Jung told the press room, “I saw him on the stage and then he called my name, I could tell he practiced a lot. He didn’t mispronounce my name. I couldn’t believe it, maybe I just blacked out a couple of seconds.”

She also shared the correct pronunciation of her name. “Tonight, you are all forgiven,” she stated before taking a moment to pull herself together. As we’ve seen throughout award season, Yuh-Jung is ever the gracious winner and shouted out her fellow nominees, saying, “Tonight I’m luckier than you. And also maybe it’s American hospitality for the Korean actor?” You can see her heartwarming speech in the full video above. For those still wondering what her dream project with Brad would be, she had this to say: “That would never happen with my English and age, I don’t think so.”