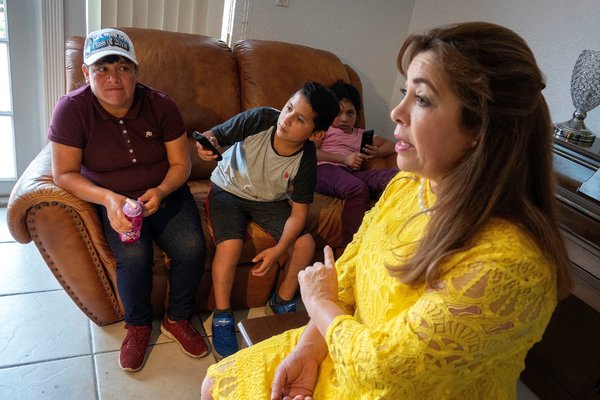 THE GREAT MOTHER 9 p.m. on Starz. This documentary tells the story of Nora Sandigo, a Miami woman who serves as the guardian to more than 1,000 children who were born in the United States to undocumented immigrants. Sandigo, who fled Nicaragua as a teenager, moved to Florida in the late 1980s, where she started working for an organization that helped immigrants with documentation. After President Trump took office, many parents in the immigrant community started to give Sandigo power of attorney, so that she could make decisions for their United States-born children, should they be deported. This designation protects the children in Sandigo’s care from entering the foster care system, keeping them from being legally separated from their parents. When Sandigo is not making grocery runs, contacting lawyers or trying to find beds for the hundreds of people she looks after, she makes trips to Washington to meet with lawmakers to discuss immigration policy. The filmmakers Dave LaMattina and Chad Walke followed Sandigo over two years during and following the 2016 election for this documentary.

TIGER WOODS CHASING HISTORY 8 p.m. on Golf Channel. When Tiger Woods won the Masters in April, for fans, it served as a metaphorical triumph over his decade of personal and professional struggles. His long and storied career has charted victories and disastrous setbacks, including numerous surgeries, an addiction to painkillers, the death of his father and his very public infidelity scandal and subsequent breakdown of his marriage. This two-hour documentary, however, focuses on the positives in his career that may have been overlooked, offering a chronological view of his 81 professional victories, from his first in 1996, through the latest Masters win. The film also explores how Woods popularized golf and his bond with his father, Earl.

THE CODE 9 p.m. on CBS. In the season finale of this series, which follows the legal minds of the United States Marine Corps, Capt. John Abraham (also known as Abe and played by Luke Mitchell), a gifted prosecutor who was a survivor of a 2010 mission in Afghanistan, winds up arrested and court-martialed for mutiny. His colleagues Maj. Trey Ferry (Ato Essandoh) and Capt. Maya Dobbins (Anna Wood) work to defend him. The show offers a dramatized look at the pressures members of the armed services face.

TIME FREAK (2018) Stream on Hulu. With access to a time machine, some people might want to meet a hero from the past, try to stop an international crisis or live in another era. But in this teen comedy, Stillman (Asa Butterfield) chooses to use his ability to travel time and space to win back his girlfriend (played by Sophie Turner) after she dumps him. With help from his buddy Evan (Skyler Gisondo), Stillman relives the last year of his relationship, attempting to avoid the future breakup. The movie has some decent star power with Butterfield, of Netflix’s “Sex Education,” and Turner of HBO’s “Game of Thrones.”