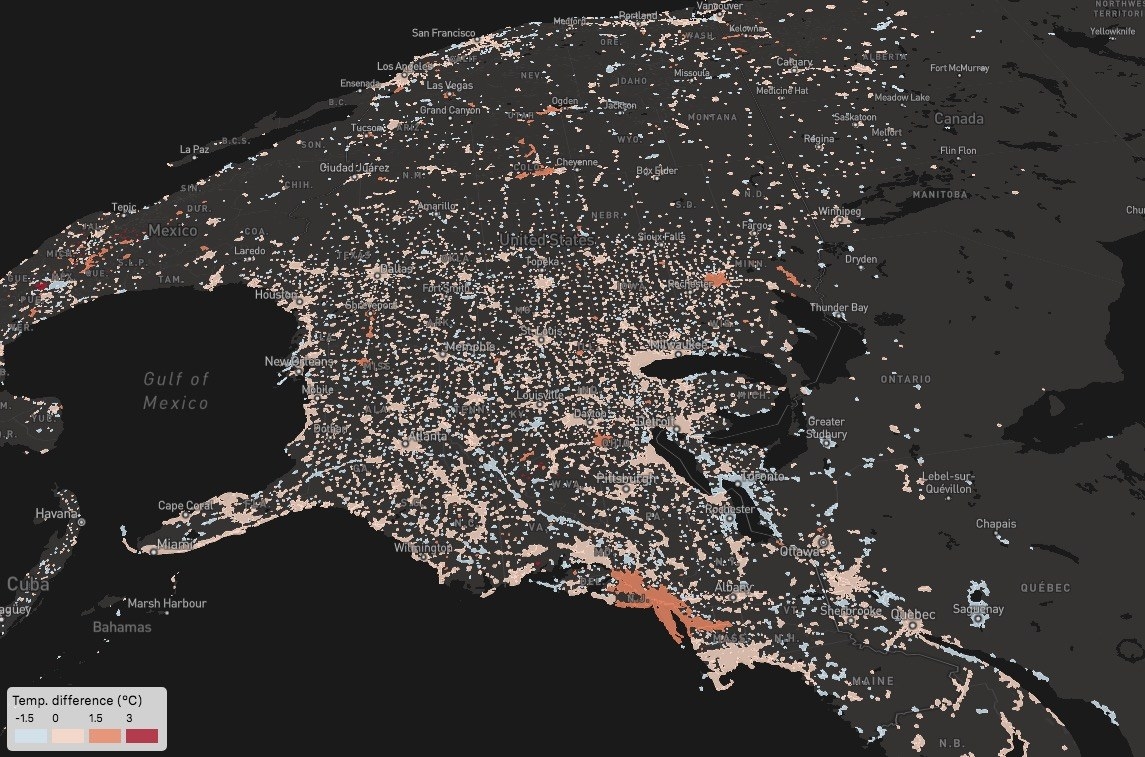 The heat is on across much of the Midwest and Northeast. “A widespread and dangerous heat wave is building,” the National Weather Service warned Thursday morning, predicting highs well in excess of 100 degrees Fahrenheit.

The heat will be particularly oppressive for many city dwellers because of a phenomenon called the urban heat island effect. Asphalt and concrete absorb more of the sun’s energy than natural landscapes, while vegetation has a cooling effect as water drawn from the soil evaporates from leaves on plants. Waste heat from traffic, air conditioning systems, and other machinery further exaggerates the temperature difference between cities and the surrounding rural areas.

The combination of factors leaves many cities several degrees warmer than the surrounding farmland, grasslands, or forests.

You can use the maps below to see how strong the summer urban heat island effect is in the city you live in, as well as in others across the globe.

Tap or click on the map or use the search box to see the temperate difference between a city and the surrounding rural area.

This map shows the average daytime difference in maximum daily temperature at ground level between each urban area and a surrounding 10-kilometer-wide buffer, as measured from NASA satellite data over a 40-day period in July and August 2013.

See if you can find the rare cities that are cooler than the surrounding areas.

You’ll find some in the western US and in the Middle East — Cairo and the rest of the Nile Valley in Egypt, for example. Proximity to water helps keep some cities cool, particularly if it allows the planting of trees in an otherwise arid, desert landscape.

Cities can also be designed to minimize the heat island effect, for example by having roofs painted white or covering them in vegetation.

The extra few degrees of warming are concerning because excessive heat is a killer. A heat wave across much of Europe in 2003, which was particularly severe in central and southern France, is estimated to have killed more than 70,000 people.

When heat waves strike, the elderly are most vulnerable, and the toll is highest when the heat and humidity don’t ease off much after sundown. “That’s when the human body needs to recover,” Brian Stone, director of the Urban Climate Lab at Georgia Tech in Atlanta, told BuzzFeed News.

Heat can kill directly from heatstroke, which damages the brain, kidneys, heart, and muscles; it can also kill by worsening breathing problems or by increasing the risk of heart attack or stroke.

This map shows the average summer nighttime urban heat island effect from the same NASA analysis. In a heat wave, the few extra degrees it adds can tip vulnerable people over the edge.

Excessive heat, amplified by the urban heat island effect, will become an increasing problem with climate change. According to a report issued this week by the Union of Concerned Scientists, without drastic action to limit greenhouse gas emissions, the average number of days with a heat index above 100 degrees in the US could more than double by midcentury, compared with conditions from 1971 to 2000. (The heat index also takes account of humidity and is sometimes called the “feels like” temperature.)

As much of the US heads toward a swelteringly hot weekend, keep drinking fluids, know the signs of heat exhaustion and heatstroke, and keep an eye on elderly relatives and neighbors. If you don’t have air conditioning, try cooling off in a public building like a library or museum.

And if you can, maybe get out of the city for a few days to escape the heat island effect.