Comedian and actor Tiffany Haddish honored her Jewish heritage during a star-studded bat mitzvah ceremony in Los Angeles this week.

Haddish hosted an intimate religious ceremony for friends and family, as well as a reception with a red carpet and a dance floor.

Several Jewish celebrities attended the festivities, including fellow comedians Chelsea Handler and Sarah Silverman. Billy Crystal was tapped to recite blessings over the Torah during the religious ceremony. The singer Barbra Streisand gifted Haddish a diamond Star of David necklace and tweeted her congratulations.

Bar or bat mitzvah ceremonies are “coming of age” rituals that publicly affirm an individual’s Jewish identity. During the ceremony, participants typically chant portions from the Torah and deliver a short sermon. The ritual usually takes place around the ages of 12 or 13. Many American synagogues now have special programs for adults who didn’t have the chance to participate as children.

Haddish discovered her Jewish roots later in her life, after reconnecting with her father, an Eritrean-born Jew. The reunion inspired Haddish to explore her Jewish identity.

The star had been preparing for the bat mitzvah ceremony for several months, studying Hebrew and learning about Jewish ritual. 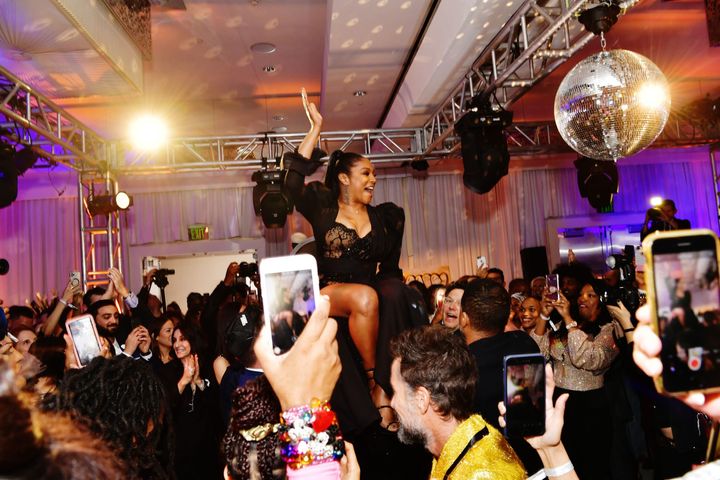 Rabbi Susan Silverman, Sarah Silverman’s sister, was the officiant at Haddish’s religious ceremony. The rabbi told the Jewish news site the Forward that Haddish chose to have a bat mitzvah ceremony in order to mark a commitment to her heritage.

“She wants to be connected to Judaism, to tradition in everything she does. You can see the relief, and joy, and power in that for her,” the rabbi said.

The rabbi said Haddish delivered a short reflection on a Bible story about the ancient Jewish patriarch Jacob, who dreamed of a ladder stretching up to heaven and received a confirmation about God’s covenant with the Jewish people.

“She placed herself in the story in such a meaningful way,” Silverman said of the sermon. “You couldn’t help but be moved by the living tradition.” 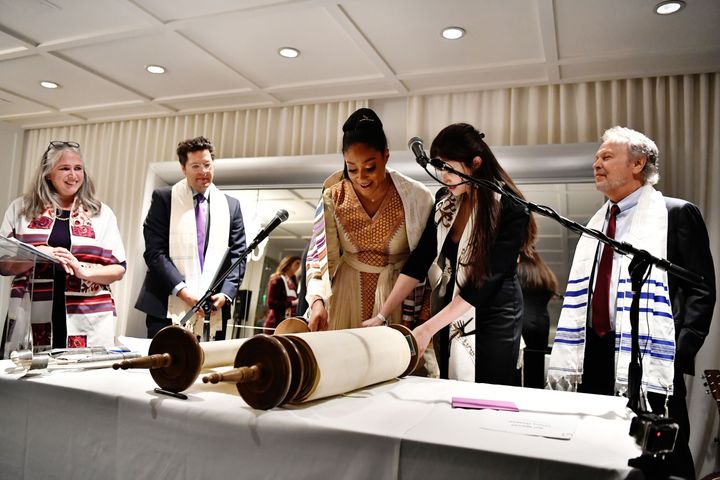 Before her big break as a comedian, Haddish spent 11 years working as an “energy producer” for an entertainment company. In that job, she worked hundreds of bar and bat mitzvah parties, getting paid to hype up guests on the dance floor.

This week, Haddish apparently had that same entertainment company work her own bat mitzvah. She entered her party to the tune of “Hava Nagila,” a folk song traditionally sung at Jewish celebrations, and gave out black satin yarmulkes emblazoned with the words, “Black Mitzvah.”

Haddish encouraged others to tap into their own cultural roots.

“As black people, when we were brought here to America, a lot of our heritage was stripped from us, and me being able to do my DNA test and find out who I really am and what I am and learn more about my people and the heritage, I feel like it’s very important to share that with the world,” the star told The Hollywood Reporter. “We can all start digging and find out who we are and what we are and start having some honor and pride in ourselves.”

In a piece for the faith-based blog Alma, Rebecca Pierce, a Black and Jewish filmmaker and writer, said that Haddish’s public affirmation of her Jewish identity tackles the assumption that Black people don’t belong in Jewish spaces.

“She is claiming a contested space that many Black Jews fight to be in every day of our lives: our own Jewish communities,” Pierce wrote.