This weekend, the 16th season of Keeping Up With The Kardashians wrapped up, with the final episode dedicated to the aftermath of the Khloé Kardashian/Tristan Thompson/Jordyn Woods scandal. 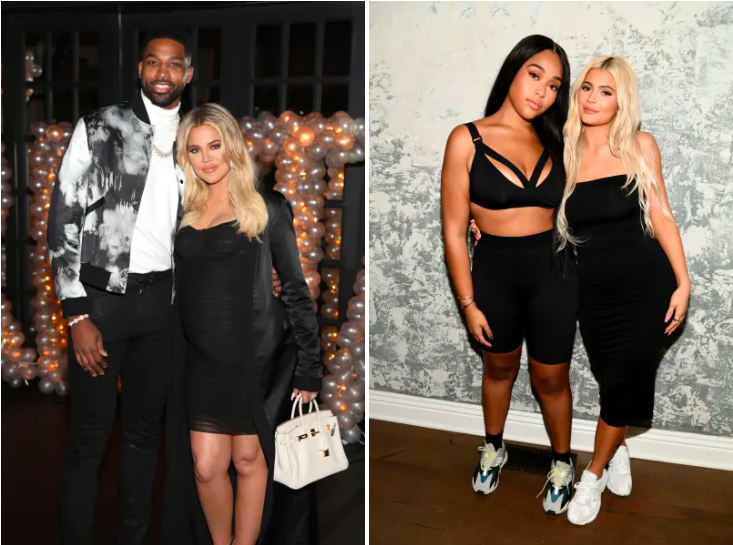 Back in February, Khloé ended her relationship with Tristan Thompson after he was accused of cheating on her with Kylie Jenner’s best friend, Jordyn Woods. The split came less than a year after Tristan was accused of being unfaithful just days before Khloé gave birth to their daughter, True.

Last week we saw what went down in the immediate days after the news broke. And this week’s episode charted Khloé attempting to deal with the betrayal, as well as the family’s reaction to Jordyn’s tell-all interview with Jada Smith less than a week later. 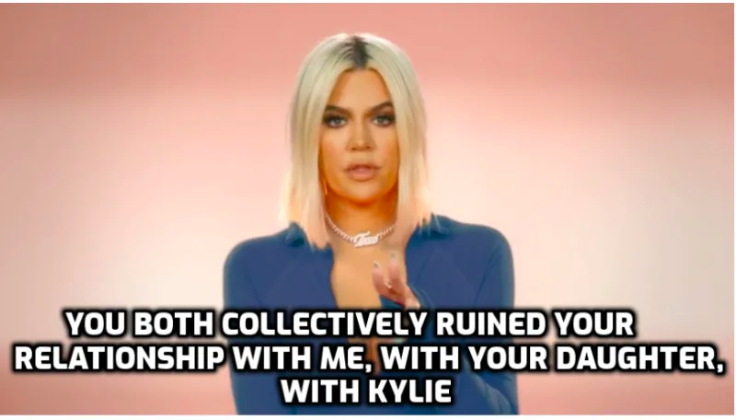 In the interview, Jordyn said that Tristan did kiss her as she left a house party, but denied that any further intimacy occurred. Here’s everything that happened in the episode…

The episode began with Kim, Khloé, Kourtney and Malika heading to Palm Springs for a girls’ weekend to take Khloé’s mind off the ordeal. In this scene we saw the moment Kim and Malika filmed themselves singing along to “Who Is She 2 U,” as a clear dig at Jordyn, before uploading the videos to social media. 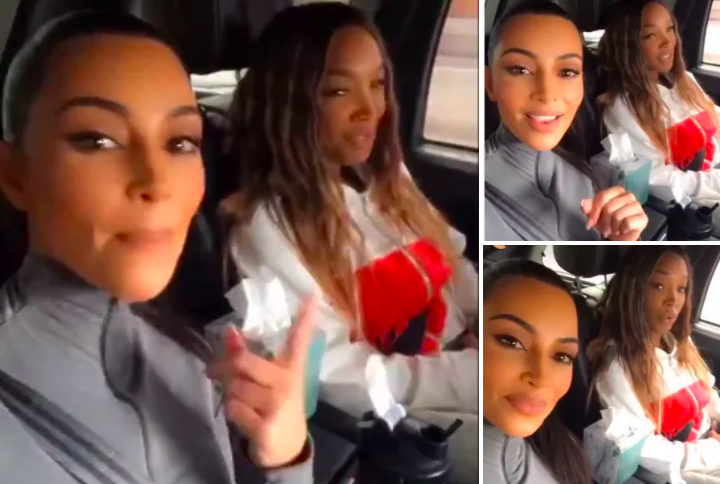 Keep this in mind — we’ll come back to it later.

Later in the episode, Kim, Kourtney, Khloé and Malika sat down for dinner in Palm Springs. Khloé immediately began venting her anger, saying that she was sick and tired of having to suppress her emotions for the sake of maintaining the ~Kardashian brand~. 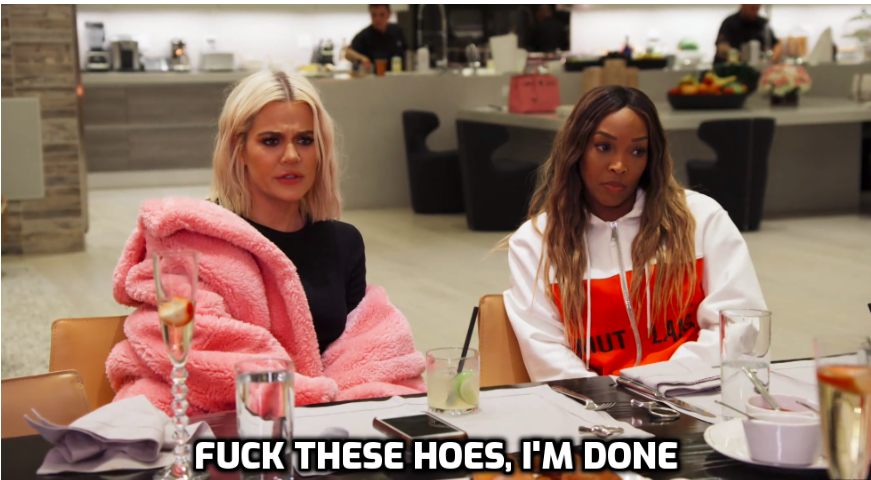 She yelled: “Fuck these hoes. I’m done. Everyone told me how aggressive and crazy I am — I’m going back to that. Kim and mom have calmed me down saying, ‘This is not who we are and you’re going to ruin our name,’ but I’m going to go back to how I used to be.”

She continued: “Kylie’s best fucking friend is sat on a golden fucking shitting throne. This shit is so whack that these fucking bitches think that they can fuck our men.” 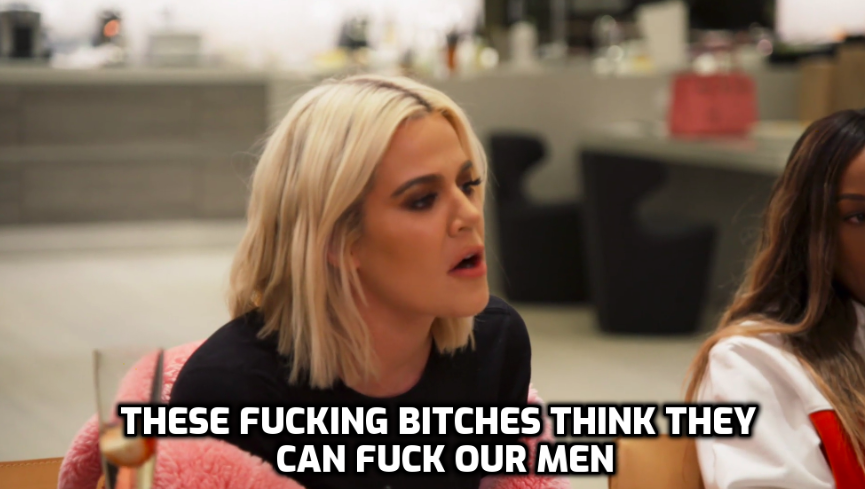 Then, after several glasses of tequila, Khloé decided to call one of Tristan’s best friends, Savas. He told her he was with a distraught Tristan at his Cleveland home. Khloé yelled down the phone: “Tristan! Fuck you if you can hear me. Fuck you!” 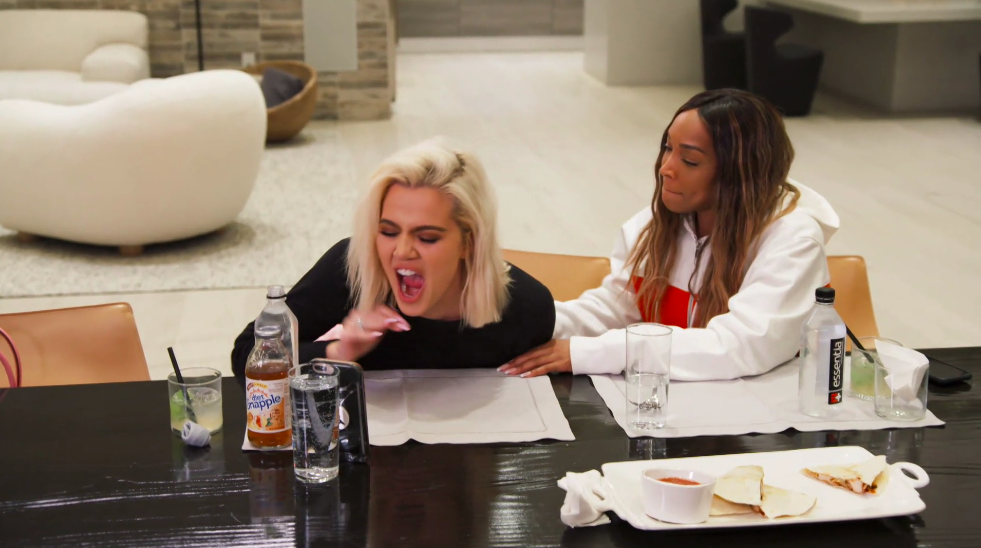 Savas went on to tell her that Tristan was claiming that he “didn’t remember anything” from the house party, and that he was now saying that he didn’t kiss Jordyn. Khloé screamed down the phone: “Liar! Liar! They both admitted it to me. Those fucking assholes. Don’t lie to me. Don’t fucking say that you didn’t do something when you fucking did, when you both fucking told me you fucking kissed bitches. And you’re a fucking LIAR!”

The next morning, Kylie called Kim to pull her up on the videos she’d posted from the car ride to Palm Springs, accusing her of bullying Jordyn. 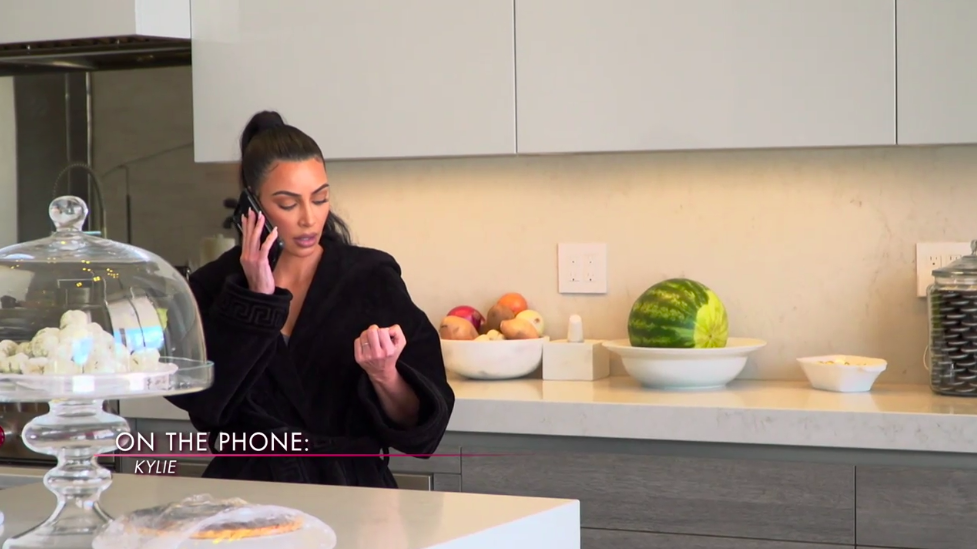 Kylie said: “I saw the Snapchats of you guys singing. I just feel like we’re bigger than this and we’re better than this. If you wanna call her and yell at her, do whatever you want, or let’s talk in person, but I just feel the singing and the internet stuff is not OK. We just don’t need to bully somebody.”

Kylie went on to tell Kim that Jordyn had come over the previous night to collect some things from her home. Kylie burst into tears as she relayed to Kim how devastated her best friend was. 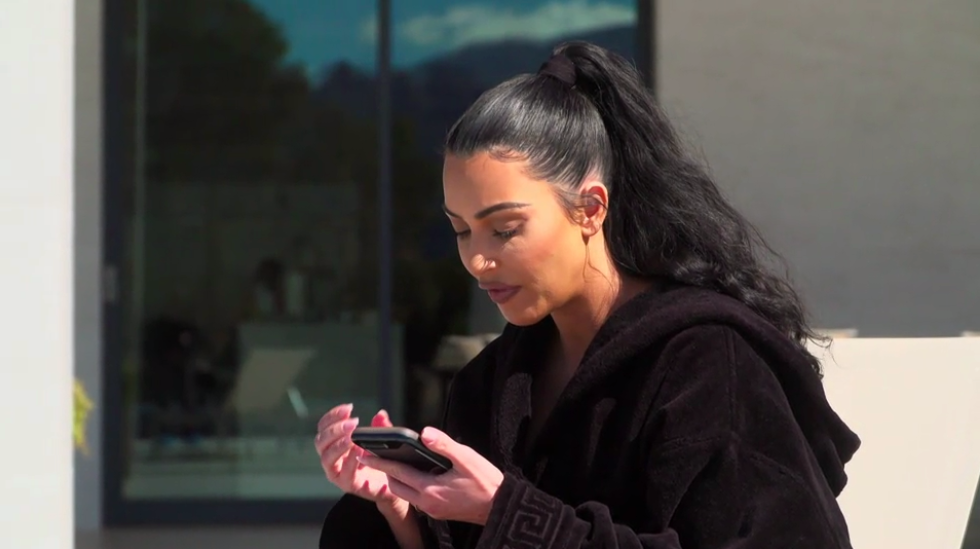 She said: “Jordyn hit me last night and was like, ‘Hey, do you mind if I come and get some things from the house?’ She came in and just the look in her eye…she’s obviously just really going through it. I just don’t think anyone deserves this.”

Kim apologised to Kylie and said she never wanted to be involved with bullying. 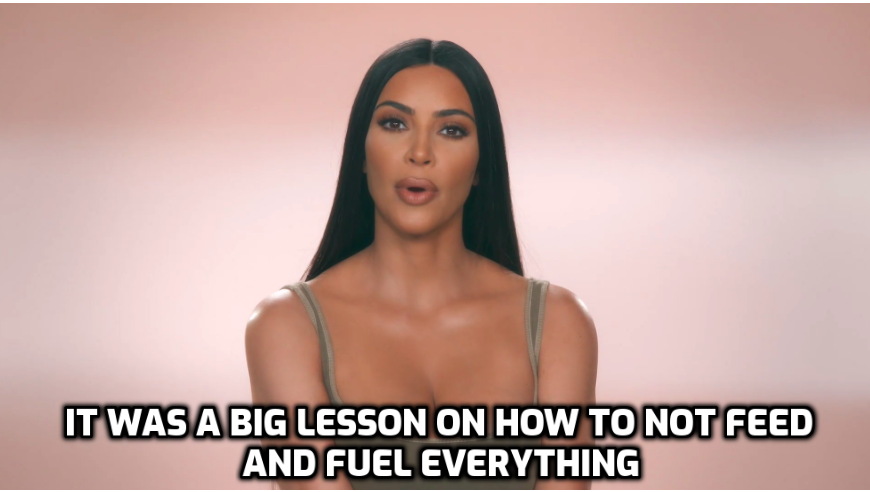 She said: “I don’t want to be seen as bullying someone, that’s never been my MO. I literally caught myself and deleted the videos.” Kim added in her testimonial: “It was a big lesson on how to not feed and fuel everything. I feel really bad for Kylie. She’s essentially going through a breakup herself.”

Later in the episode, we also saw Kim telling her long-time friend Jonathan Cheban that she’d had to caution another BFF, Larsa Pippen, against commenting about the situation on social media or to the press. 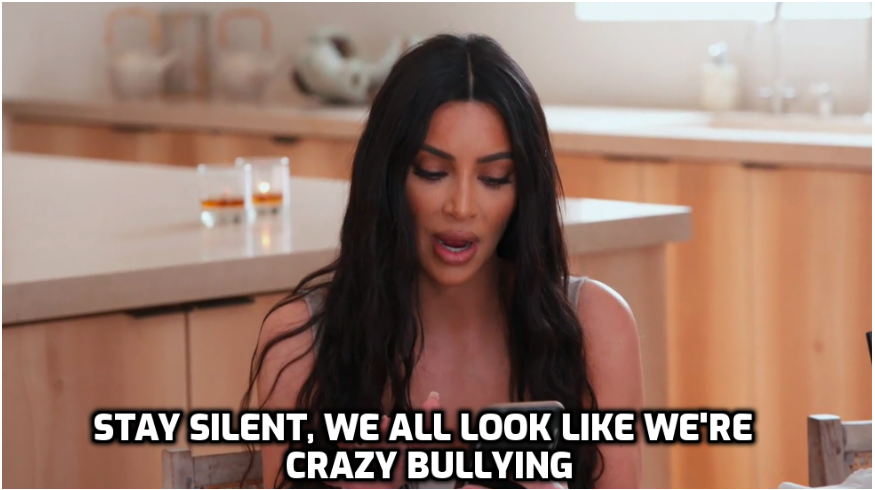 Kim said: “I wrote Larsa this morning and I said, ‘It’s looking super fucking lame of you answering questions about this to TMZ walking down the street. It has to stop. Khloé is super upset and just wants it to go away, and it makes it look like everyone around us just wants a little extra shine off of her family getting torn apart. Stay silent, we all look like we’re crazy bullying.'”

We also saw Kylie addressing the fact that Kylie Cosmetics ended up putting some of the products from her makeup collaboration with Jordyn on sale in the days after the scandal broke. It was something people quickly noticed, and suggested Kylie was being intentionally shady. 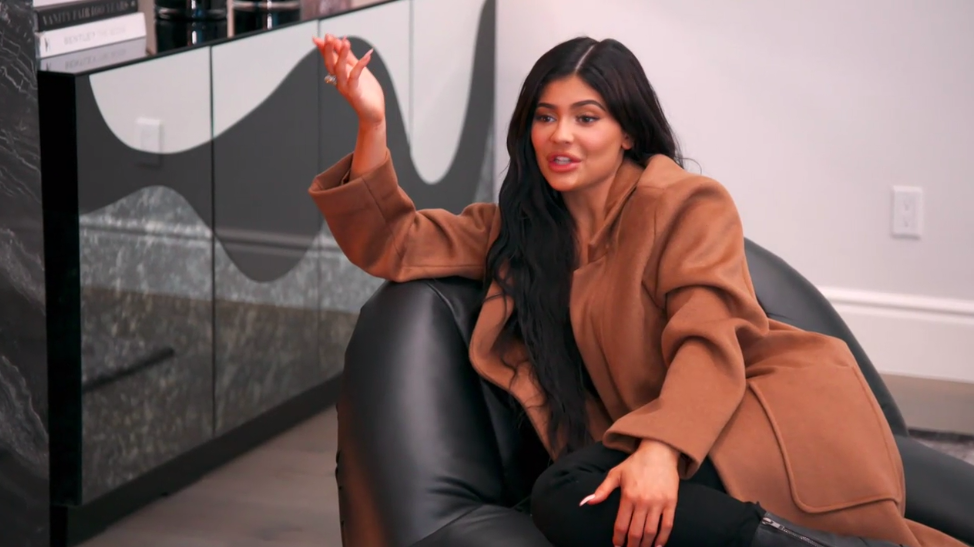 Kylie explained that she was changing the colour of the packaging of her products, and there were a few miscellaneous items left in the wrong shade. So, she approved putting those products online at discounted prices “weeks ago”, but hadn’t realised that they were Jordy Lip Kits.

“I would never want people to think I put the Jordy Lip Kit on sale and be messy — that’s just not my character,” she added, “I just said, ‘Take it off sale’ even though the damage is done.” 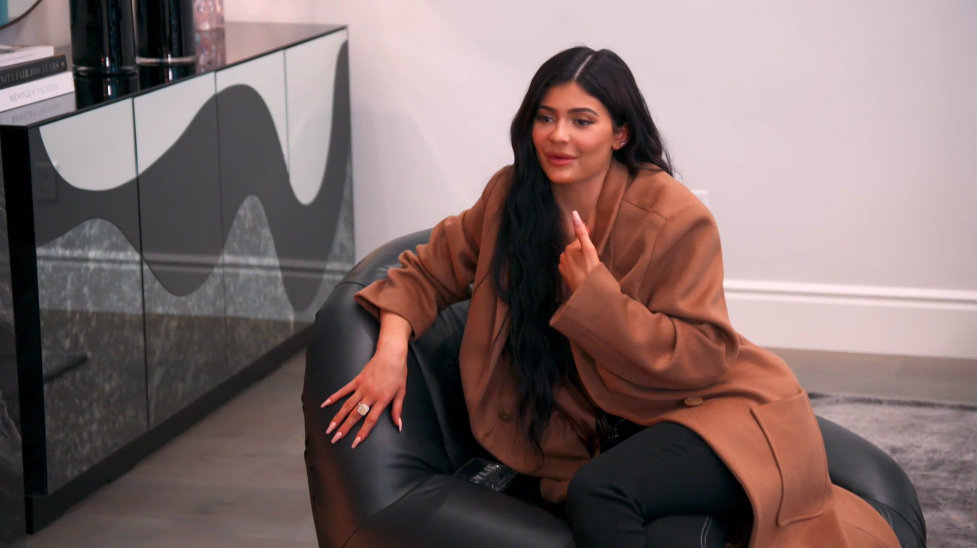 Then came the dramatic moment that Khloé found out about Jordyn’s plan to do a tell-all interview with Jada Smith. 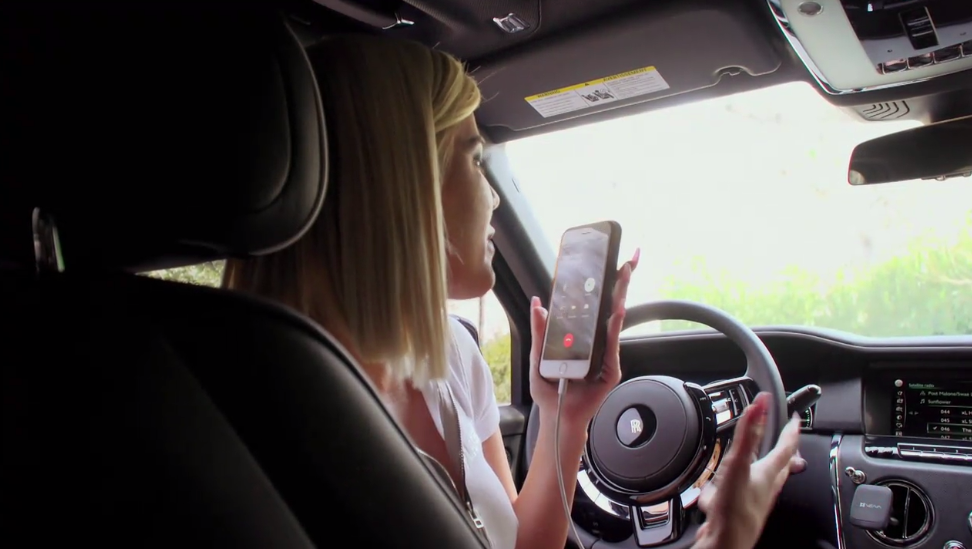 Minutes after finding out, Khloé called Kris and said: “What in the actual fuck? Who the fuck does this bitch think she is? She should be apologising to me. I talked to her the first time Tristan cheated on me, I confided in her. My world got destroyed while Jordyn is doing press interviews about it?!”

Kris swiftly told Khloé that she had actually been given the heads up about the interview by Jada the day before but hadn’t put a stop to it — news that Khloé was furious about. 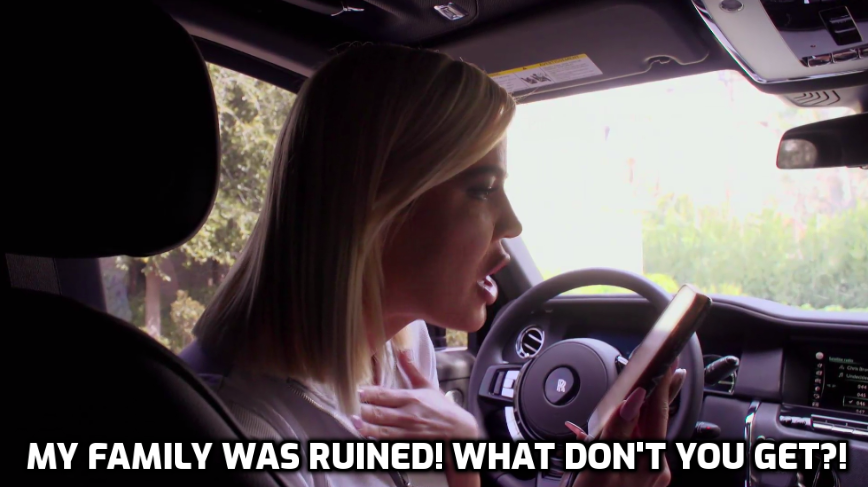 Khloé shouted: “Jada called you when?! These people have no fucking loyalty to you. We are your fucking tribe. I’m your daughter. They’re fucking with us. My family was ruined! What don’t you get?!”

Shortly after Jordyn gave her interview, the family gathered for a meeting at Kylie’s house, where Khloé said she was angry that Jordyn still hadn’t spoken with or apologised to her ahead of talking to the media. 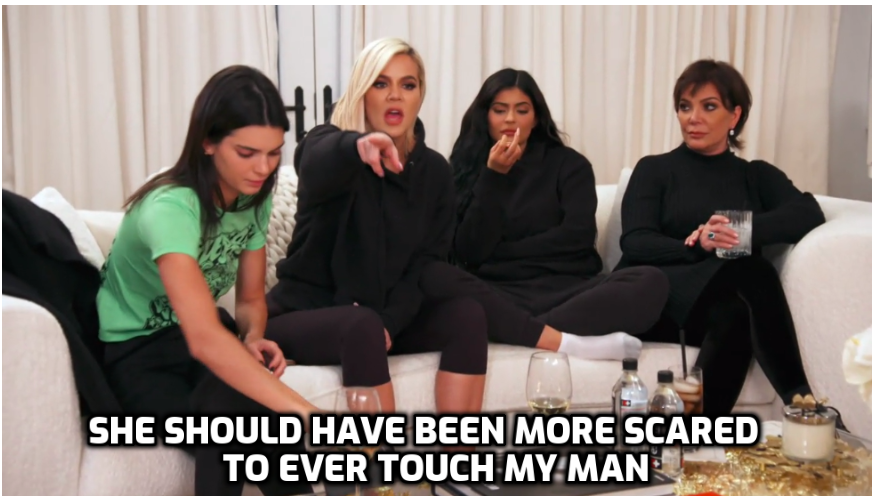 She said: “Today was really shocking. I don’t think any of us thought she’d do a sit down interview. I think it’s bizarre. Couldn’t she have talked to me to say ‘sorry’ to me first?” When Scott told Khloé that Jordyn was probably “drop dead petrified” of the family and their power, she responded: “She should have been more scared to ever touch my man. And she wasn’t scared. She was too fucking comfortable.”

“If a girl is fucking with your baby daddy,” Khloé continued in her testimonial, “What girl is gonna be like, ‘OK, you wanna kiss him? Yeah! Anything else? Would you like anything else from me? My soul?” 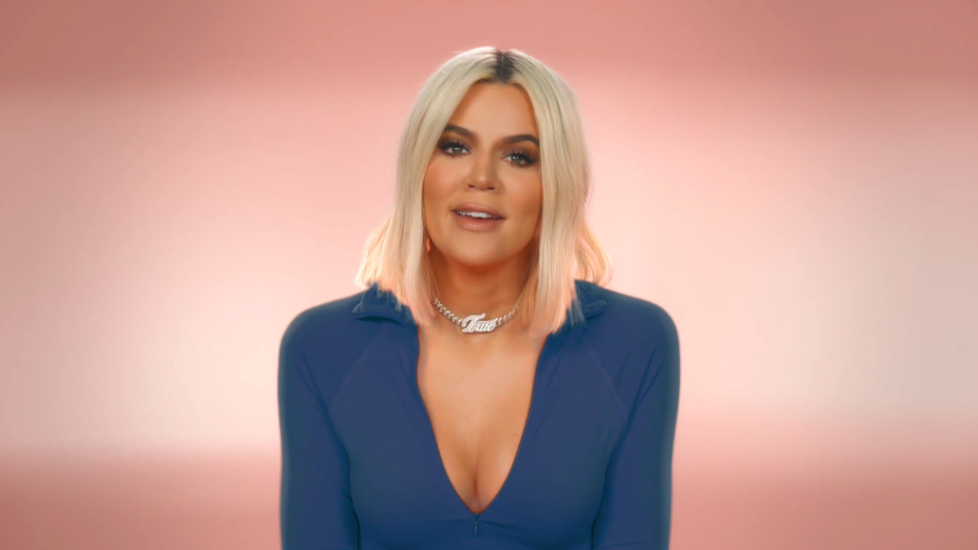 Khloé went on to compare Tristan and her ex-husband Lamar Odom, who was also unfaithful to her multiple times during their four-year marriage. 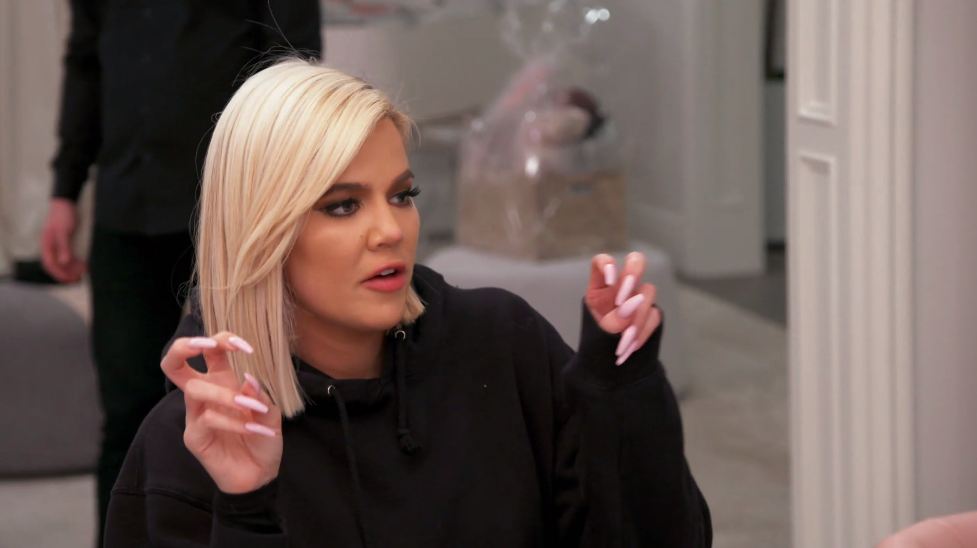 She said: “When I was married to Lamar, I didn’t know [about his infidelity] until we started going to therapy and he started admitting stuff to me. With Tristan, you need hardcore proof. Tristan might “love” me, whatever that means, but he has no respect for me whatsoever.

She continued: “I think if a man can cheat on someone so publicly, at nine months’ pregnant, something is wrong with you. I didn’t know there was something wrong with Jordyn too.” 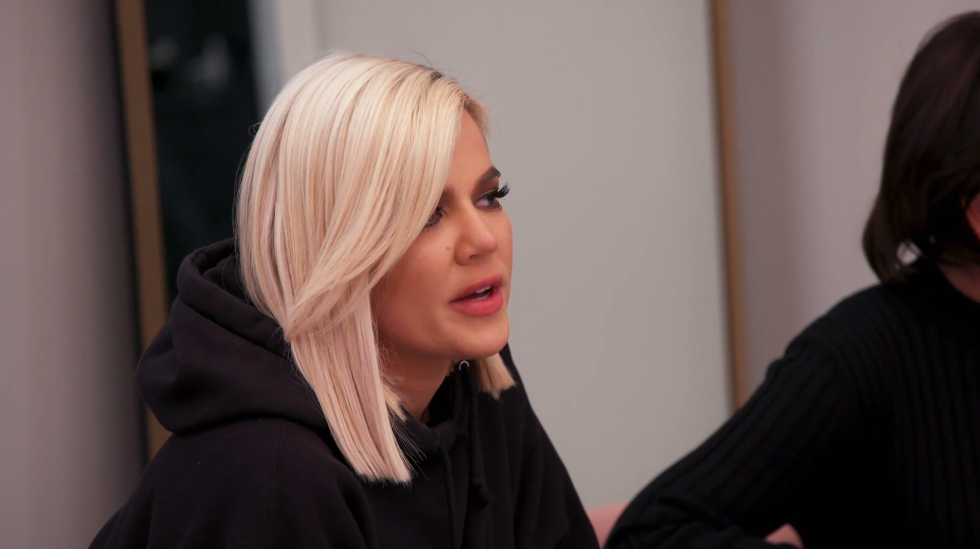 Khloé also revealed that Tristan had actually been remorseful this time, but said she could never take him back. 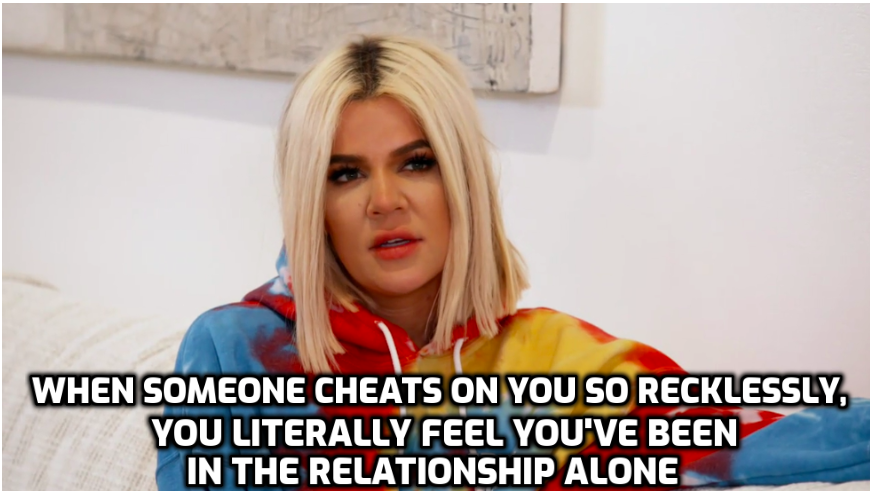 Speaking to Kourtney, Khloé said: “This is the most I’ve ever actually got out of him. The first time [he cheated], we had a baby and I was stuck in the same house with him so he had no need to call me. Not that I’m going to get back with him, but…it makes me feel like, at least I matter to [him] to some degree, because when someone [cheats] on you so recklessly you literally feel you’ve been in the relationship alone.”

She added: “There’s no amount of phonecalls or text messages that will ever repair Tristan and my relationship. The humiliation and the hurt that he has caused myself, my family and True…I don’t know what self-respecting human being could ever take someone back.” 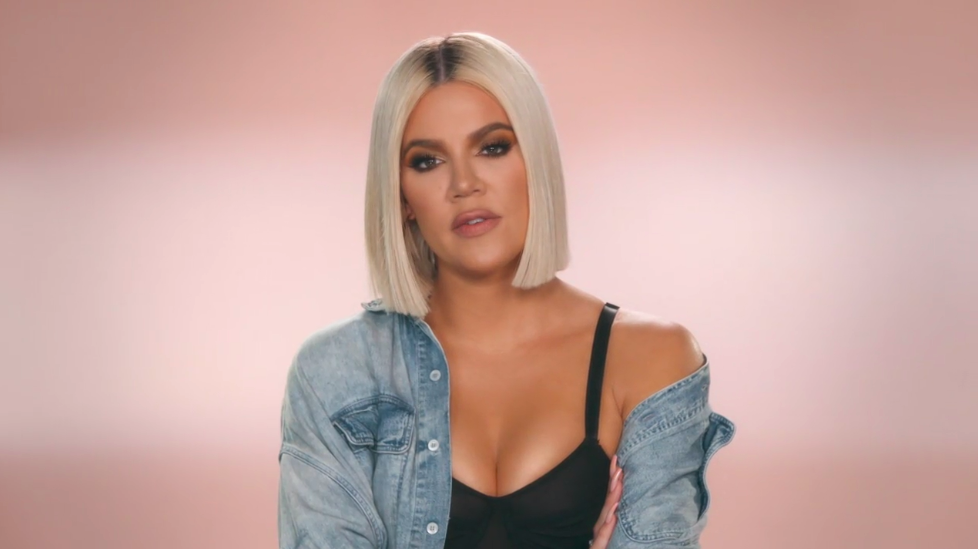 The episode also addressed the tweets Khloé posted in the aftermath of Jordyn’s tell-all interview in which she branded her a liar and blamed her for the breakup of her family.

The backlash was instant — people immediately began calling Khloé out and questioning why she hadn’t assigned any of the blame to Tristan, while some sent her death threats and threats against her daughter.

Khloé explained that she’d tweeted “out of emotion”, and her words were a response Jordyn saying in the interview that she wasn’t the reason for Khloé and Tristan’s breakup. 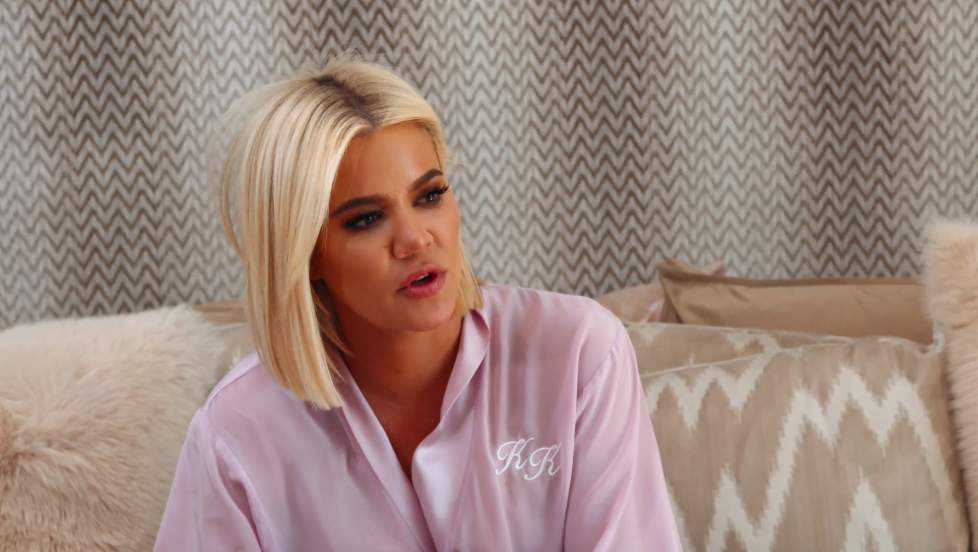 “I didn’t choose to go and make this public,” Khloé continued. “She did. Even if they did just “peck,” which they didn’t, she still decided to go and do an interview instead of talking to me.” 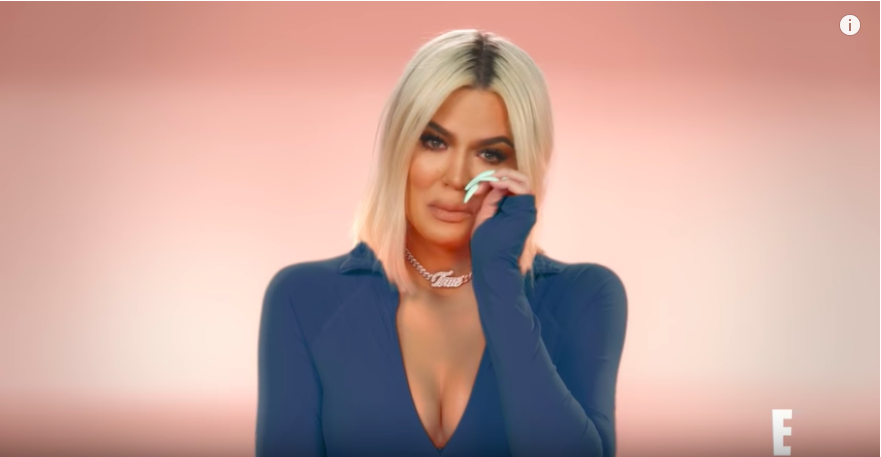 Speaking through tears, Khloé said in her testimonial: “No one understands, I’m not just a TV show. This is my life. It breaks my soul, and it’s happened so many times.”

And, in her final testimonial, Khloé responded to the claims that the drama was simply a publicity stunt to boost ratings for KUWTK. 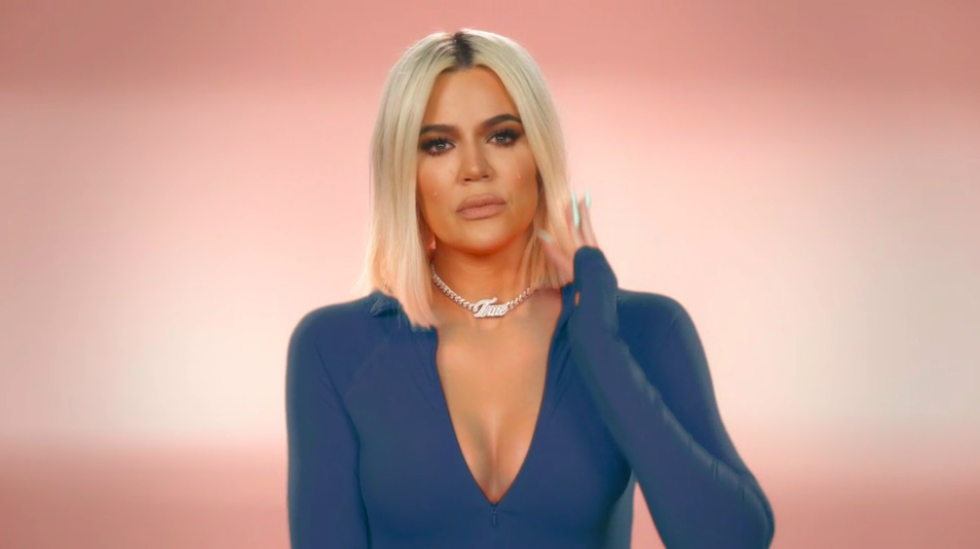 She said: “Sometimes I think people forget I’m not just an episode. It’s not just to get something trending. It’s my real life. No one would ever fake this. I get that we’re entertainment, but we’re also human. I think sometimes the world forgets to be kind and that we’re all going through something. Maybe just be a little more understanding, because it fucking sucks.”

Ellie Woodward is acting celebrity editor for BuzzFeed and is based in London.