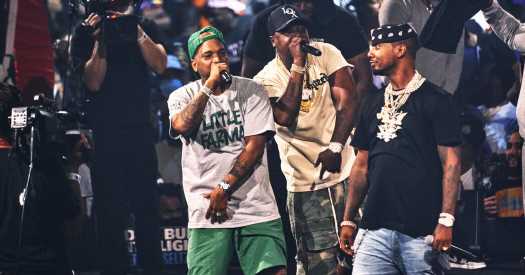 In early August, Verzuz — the pandemic-era staple that began on Instagram Live and within a year morphed into a multi-platform content powerhouse with artists “battling” hit for hit — held its first live, ticketed, in-person event. The night featured two of New York’s most historically vital hip-hop crews, the Lox and Dipset, facing off at the Hulu Theater at Madison Square Garden.

From a distance, it seemed like a light mismatch — Dipset, Cam’ron and his extended crew, are flashy and theatrical, and the Lox are workmanlike and relentless. But the battle took place in a boxing ring, and that set the tone: The Lox emerged triumphant.

On this week’s Popcast, a conversation about New York rap in the 1990s and early 2000s, the long-forgotten tension of pop crossover, and a night that brought the spirit of battle back to Verzuz, which had begun to turn into a lovefest.

Jayson Rodriguez, a longtime hip-hop journalist and writer of the Backseat Freestyle newsletter

Jayson Buford, who writes about music for Rolling Stone, Pitchfork and others