If you’ve encountered Captain America only in the Marvel movies, it may surprise you to learn that in the comic books, Steve Rogers isn’t the only person who has picked up the shield and called himself (or herself) “Captain America.” There have been dozens of reboots, retcons and alternate universes in Marvel Comics’ publishing history, and along the way over a dozen heroes have donned the red, white and blue. More often than not, the stories about these characters weigh one big issue: What does it take to symbolize an entire nation’s ideals?

At the end of last week’s episode of “The Falcon and the Winter Soldier,” we got our first glimpse of John Walker, the man the U.S. military chose to replace Steve as Captain America. This week’s episode, “The Star-Spangled Man,” opens with Walker in his old high school locker room, waiting to go out onto the football field for an interview with “Good Morning America” meant to show the world why he’s the right Cap.

But if Walker is wrestling with any doubts about whether he deserves to wear the costume, he doesn’t show it. He may hate the rah-rah promotional parts of the job, but as someone who won three Medals of Honor in his Army career, Walker is already acting as if he’s earned this.

The Falcon and the Winter Soldier, on the other hand? They’re not so sure about him. When Walker says on “Good Morning America” that he never knew the old Captain America personally but that Steve “feels like a brother,” the comment gets deep under Bucky’s half-mechanical skin. He runs to Sam to chastise him for letting this happen by refusing to take up the shield.

Ultimately though, neither of these guys knows what he can do about the Walker situation. Even if there’s something off about the new guy, Sam can’t “call America and tell them I changed my mind.”

If Episode 1 was all about re-establishing its two main characters and what they’ve been up, Episode 2 is about fulfilling the promise of the series’s title. Everyone tuning in to watch the Falcon and the Winter Soldier trade quips and fight side by side will get what they want this week. The pair’s chemistry really changes the show’s energy. There’s less brooding and more banter.

Like last week’s chapter, this one is anchored by a lengthy chase and fight sequence, filled with nifty special effects. Here, the big set-piece comes about 20 minutes into the story. Our heroes are patrolling outside Munich, tracking the Flag-Smashers, when they discover their targets appear to be “super-soldiers,” like Steve and Bucky.

A battle ensues with these meta-humans, both atop and sometimes under a caravan of supply trucks, snaking through the German countryside. The good guys and the bad guys leap and fly, darting and ducking between vehicles as they pummel each other. It’s a rush to watch.

Just when it looks as if all hope is lost for Sam and Bucky, Walker races in with his old war buddy — and new sidekick — Lemar Hoskins (Clé Bennett), also known as “Battlestar.” The Flag-Smashers escape, but the two heroic duos survive and have an awkward getting-to-know-you session in the aftermath of the mission. During their chat, Walker projects a little bit of humility — “I’m just trying to be the best Captain America I can be,” he says to Sam — but once again, he clearly suggests he’s the best person for this new job. And he (maybe) inadvertently insults the Falcon by asking him to be his “wingman.”

It’s not that Walker is a jerk. (Given that he’s played by the likable Wyatt Russell, the star of the wonderful “Lodge 49,” this Captain America is going to be hard to hate.) But he already acts like someone in charge, which is inherently irritating — especially to the guys who knew the old Captain America best. 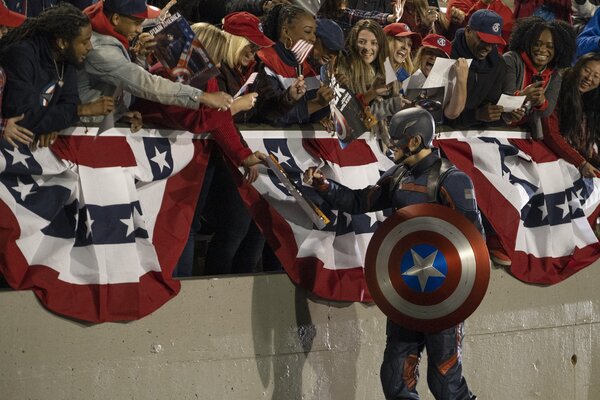 What’s more immediately worrisome for Sam and Bucky is that it appears Captain America and Battlestar aren’t going to let them pursue the Flag-Smashers case on their own. If they go beyond what the American government wants — as it appears they’re going to, given that the episode ends with their conversation about consulting with the terrorist Helmut Zemo (Daniel Brühl) — they may risk becoming outlaws again.

Is this fair? After all, both Sam and Bucky have spent good chunks of their lives serving their country in roles that have required them to follow orders and to trust the mission. But what if they have no faith in the guy telling them what to do?

That’s one of the questions that hangs over this series so far — including when it comes to the Flag-Smashers, who in this episode come across as an earnest band of idealists, loyal to each other and to their cause. They simply see no reason to honor the pre-Blip status quo, given that they’ve just spent five years on a half-populated Earth, living a difficult but less-stratified kind of life.

This is why, next to the action sequence, the best moments in this episode come when Bucky takes Sam to Baltimore to meet Isaiah Bradley (Carl Lumbly), a veteran of the U.S. super-soldier program who might be able to help them understand the Flag-Smashers’ origins. Isaiah angrily turns them down, in part because he doesn’t trust the ex-Hydra agent Bucky and in part because he doesn’t feel compelled to help a government that once treated him as an experiment — and an abandoned one, at that.

It isn’t mentioned on the show, but in the comics, Bradley, too, wore the Captain America uniform. And just like the wrangling over who gets to be the hero and who gets to be the “wingman,” the mistreatment of Bradley must rankle Sam because it raises another dichotomy: who gets remembered in the history books, and who becomes a footnote.

The usual Marvel TV logo fanfare was replaced this week by the funky sound of a marching band at the big event for the new Captain America. That should be this show’s new theme. It’s genuinely stirring, and it combines martial sounds with classic R&B in a way that fits the Falcon’s whole vibe.

The Marvel Studios special effects teams deserve a pat on the back for the way it got the Falcon’s mechanical wings to curl just right whenever he comes in for a landing.

So far, “The Falcon and the Winter Soldier” isn’t shying away from the subject of race, although this week the writers mainly dealt with it using provocative asides: as when a kid in Baltimore calls Sam “the Black Falcon,” and when Isaiah refers to Bucky’s “people” and Bucky has to clarify for Sam that Isaiah meant Hydra, not white folks.

Here’s a fine example of how the tone of this show’s dialogue lightens up when the main characters are together. The Falcon categorizes super villains as “one of the Big Three,” meaning “androids, aliens and wizards,” but Bucky doesn’t believe in wizards. (He did, however, read “The Hobbit” when it debuted in 1937.) He also insists that Dr. Strange doesn’t count because he’s a sorcerer, but Sam disagrees, saying, “A sorcerer is just a wizard without a hat.”