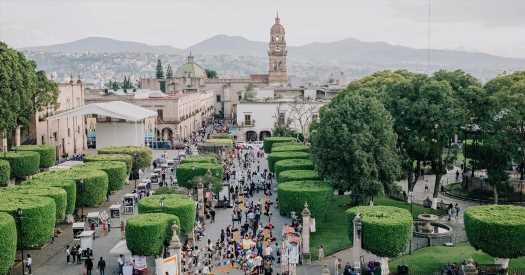 It’s more than just a stopover on the way to Pátzcuaro. 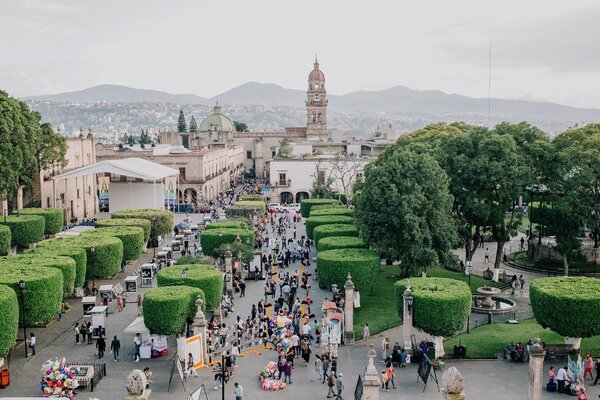 Welcome to T Wanderlust, a new travel newsletter from the editors of T Magazine. Twice a month, we’ll recommend global destinations and hotels worth visiting. Sign up here to find us in your inbox every other Friday, along with our T List newsletter each Wednesday. And you can always reach us at [email protected].

Most days at dusk, as the sun sets behind the surrounding hills, the Mexican city of Morelia blushes a deep shade of pink. Built largely from rose-colored quarry stone, the town came into existence in the middle of the 16th century, when the Spanish invaded the Guayangareo Valley — east of Lake Pátzcuaro, where the Indigenous Purépecha ruled what was then among the largest empires of Mesoamerica — and established a settlement that would become not only the state capital of Michoacán but one of the country’s most beautiful historic centers.

Founded in 1541 as the New City of Michoacán, then renamed as Valladolid in 1578 and finally as Morelia in 1828, it contains nearly 250 historic buildings laid out on a grid draped over a gently sloping hill. Murals painted by Alfredo Zalce in the 1950s and ’60s overlook the late Baroque interior patios of the government palace, offering a jagged 20th-century counterpoint to the 17th-century frescoes, lost until the second half of the 20th century, that arc in delicate grisaille over the ceiling of the Pinacoteca de San Agustín. Church bells sound from the soaring towers of Morelia’s cathedral, among Mexico’s loveliest religious structures, while at the Conservatorio de las Rosas, a music school set in a former cloister, phantom chords from hidden pianos still echo in the centuries-old loggia.

Morelia, which has a population of around 850,000, has also been a place of revolutionaries. It gave birth in 1809 to a bold conspiracy against colonial rule and was the hometown of the freedom fighter and priest José María Morelos y Pavón, who helped steer the struggle for independence from 1811 until his execution in 1815 and whose name the city now bears. In the 21st century, Michoacán has been at the center of the Mexican government’s U.S.-backed war on drugs, riven by a violence and insecurity that, for years, drove visitors away from the state capital. But Morelia’s historic center, mostly insulated from the worst of Michoacán’s troubles, remains vibrant, thanks in part to the success of its annual International Film Festival, which will hold its 20th edition from Oct. 22 to 29, and to artists and designers immersing themselves in the state’s craft traditions. While some visitors still treat the city as a stopover on the way to Pátzcuaro, a graceful town of colonial churches and cobblestone streets about 35 miles southwest that’s famous for its Día de Muertos celebrations, this has only helped Morelia maintain its singular character: a place that welcomes visitors but belongs most to those who call it home.

Set in a 17th-century palace on the Plaza de Armas, the city’s central square with gardens and a public gazebo, the 12-room Casa Grande opened in 2013 following an extensive restoration by Yucatán-based design firm Reyes Ríos + Larraín in collaboration with the restoration architect Gloria Angélica Álvarez Rodriguez. Shaker-style benches and doors crafted from the original ceiling beams accentuate patios decorated with frescos exhumed from beneath centuries of paint. Works by local artisans, such as woven hay starbursts by the Tzintzuntzan-based Antonio Cornelio Rendón, nod to the creative traditions that still thrive in small towns throughout the state. Nearby in the plaza is the charming bookstore-cafe Café Michelena, where guests can start their day with coffee, pastries and classic Mexican breakfast dishes like chilaquiles and huevos rancheros. casagrandemorelia.com.mx.

Catherine Ettinger, an expert on Michoacán’s architectural history, bought this 19th-century house in Morelia’s historic district in 2015, 35 years after moving to the city from her native California. Its three elegant bedrooms are decorated with handmade tiles and crafts, including a tiger suit worn in ritual celebrations in the neighboring state of Guerrero and woven cane lamps made in Ihuatzio, a village outside Pátzcuaro. Ettinger serves a daily breakfast of fresh fruit, homemade bread and, sometimes, local specialties like corundas (triangles of masa wrapped in corn husks and steamed) in a dining room that doubles as a veritable gallery of the region’s rich artistic heritage. lapuertablanca.com.

Located on a quiet street in the city’s historic center, Tata Mezcalería has moody lighting, convivial service and, a decade after opening its doors, an always-packed back patio. The menu includes dishes like fish with a roasted-pepper sauce cooked in a corn husk, a process called mextlapique, and refined takes on the corn-based staples of the Mexican kitchen, including beef trotter tostadas with grasshopper salsa, roasted bone marrow with fried quesadillas and sopes topped with chicharrón, pipián (a pumpkin seed sauce) and quelites (wild garden greens). Even more than the food, the draw here is the list of some 140 mezcals, roughly half of them produced in Michoacán from regionally specific varietals like savory Inaequidens and floral Cupreata. tatamezcaleria.com.

José Mariano Michelena and his brother José Nicolás helped scheme up a failed 1809 plot against the colonial government from their childhood home — a sturdy off-white house directly across from the Plaza de Armas in Morelia’s historic center. More than two centuries later, in the fall of 2017, the building became the site of the city’s finest restaurant. Named for the ill-fated coup, La Conspiración de 1809 has the dark, wood-paneled elegance of a Viennese coffee shop, right down to the bentwood chairs and copper bar. The chef, Cynthia Martinez, serves impeccably executed updates of cantina classics, like a macadamia guacamole and a pig’s trotter tostada, as well as local specialties like carnitas and uchepos (sweet tamales of tender young corn), not reinvented or deconstructed but made with unmistakable care. laconspiracionde1809.com.

Set in an old house south of the Plaza de Armas, family-run Fonda Marceva specializes in the foods of Tierra Caliente, the region that extends across central Michoacán and into the bordering states of México and Guerrero, where the pine and fir forests of the highland plateau descend through hot, rugged hills and agricultural valleys (and communities tragically shredded by organized crime). The homey patio is a peaceful spot for a late breakfast of aporreado (eggs scrambled with chopped beef, tomato and chiles) and toqueras, like small corn pancakes, best paired with slick, springy queso fresco, or farmhouse cheese. Abasolo 455, Centro.

In 1968, the city’s sweets vendors moved their stalls from under the arches across from the Morelia Cathedral to an L-shaped arcade a few blocks away. Today, many of the roughly 165 stalls in what is now called the Mercado de Dulces y Artesanías — around 30 of which specialize in regional treats — offer the same products as their predecessors. At stall Number 13, for instance, Alejandro Anguiano Guzmán, whose father began distributing sweets for one of the city’s local producers since around the time of the market’s relocation, carries the stretchy golden-brown disks of sugary, oven-roasted caramel called Morelianas; bottles of creamy rompope, Mexico’s answer to eggnog; and rollos de guayaba, made by rolling layers of guava paste into long sugar-crusted logs. Entrance on Calle Valentín Gomez Farias.

Built as a Jesuit school in 1660, Palacio Clavijero has had many lives — as a religious building (Miguel Hidalgo y Costilla, another pivotal figure in the Mexican Revolution, studied here), a military industrial school and government offices. In 2008, it was transformed into a cultural center focused on multidisciplinary exhibitions of both Mexican and international artists. Recent shows have included a retrospective of photography from Gabriel Figueroa, a luminary cinematographer of the golden age of Mexican cinema, and contemporary representations of freedom fighter Emiliano Zapata. ccclavijero.mx.

One of Morelia’s oldest buildings, a former Franciscan monastery founded in 1531, is now part museum, part shop and part government-funded arts center for the thousands of artisans who work in Michoacán. Casa de Artesanías serves as a good introduction to the depth and diversity of the state’s craft traditions — the knowledgeable staff can speak to the provenance of the myriad lacquered trays, embroidered shawls, earthenware pots and hammered copper vessels on display. artesanias-michoacan.com, iam.gob.mx.

What to bring home, as suggested by locals we like

“Victor del Castillo Mier’s ceramics lie somewhere between Pop Art and Brutalism,” says Áurea Bucio, designer of her own namesake clothing label, which makes creative, architectural use of handmade textiles from around Michoacán. “His work starts from a great knowledge of his materials and revels in their irregularities. It’s profoundly contemporary.” From $25; victordelcastillomier.com.

“Paralelo Mexicano is an industrial design office that aims to integrate history into modern objects like their chuspata stools,” says Stanley Shoemaker, a photographer from Morelia whose grandfather Don Shoemaker designed iconic furniture after emigrating from the U.S. to Michoacán in 1961. “Chuspata is a natural fiber made from an aquatic plant that grows along the edges of Lake Pátzcuaro and part of the pre-Hispanic legacy passed down through generations in Michoacán’s artisan communities.” From around $200; paralelomexicano.com.mx.