Colbert said that Musk’s idea to charge users for verification would lead to “chaos” on Twitter. “I rely on that blue check mark to know which of my butters I can’t not believe!” 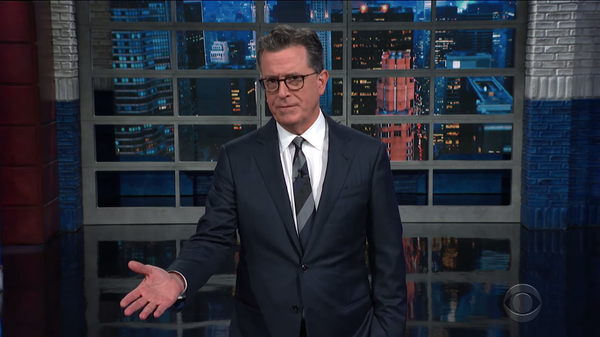 According to a leaked business plan, Elon Musk is trying to figure out ways to monetize Twitter and is considering charging Twitter users monthly for verified blue check marks on their profiles.

“But that would be chaos,” Stephen Colbert said on Tuesday. “I rely on that blue check mark to know which of my butters I can’t not believe!”

“Yeah, $8 a month for the blue check mark, because I guess he’s hoping that everyone else on Twitter will also make terrible financial decisions like he did.” — TREVOR NOAH

“With $8 a month, you can subscribe — you can get like, Netflix, you can get Paramount+, you can get Hulu, or you can pay so that people verify that they’re actually [expletive] on you: [imitating tweeter] ‘Oh, this is the real Trevor Noah? I hate this guy, yeah!’” — TREVOR NOAH

“Why are you charging the people? Give it to everyone for free, or give it to no one. Give it to no one, right? But it doesn’t make sense to offer it as ‘equality’ and then put a price on it, do you get what I’m saying? Can you imagine if M.L.K. was out there like, ‘I have a dream. I have a dream, and I’ll tell you all about it for $8.99 a month.’” — TREVOR NOAH

“And are you telling me that paragons of authenticity like Papa Johns and Papa Johns U.K. will risk falling to the same level as unverified frauds like Papa Johns Houston? You know it’s bad when Papa Johns says, ‘We cannot in good conscience verify that that is pizza.’” — STEPHEN COLBERT

The Punchiest Punchlines (One Week From Midterms Edition)

“The midterm elections are just one week away. That’s right, in one week, we’ll know who gets the House, the Senate and the upper hand at Thanksgiving.” — JIMMY FALLON

“The midterms are only seven days and four secret Herschel Walker abortions away.” — JIMMY KIMMEL

“You can tell the midterms are close when the fund-raising emails are in all caps: ‘JIMMY, I NEED $10 NOW!’” — JIMMY FALLON

“And the big question for Republicans is when to start claiming fraud. You don’t want to go too early, because what if you win? You don’t want to pull a stop the steal on yourself. It’s tricky, you know?” — JIMMY KIMMEL

Jeff Wright, a “Late Night with Seth Meyers” writer, hosted a support group for some undecided voters on Tuesday’s show.

What We’re Excited About on Wednesday Night

Yvonne Strahovski will chat about the final season of “The Handmaid’s Tale” on Wednesday’s “Jimmy Kimmel Live.”

The “Dead to Me” star Christina Applegate was diagnosed with multiple sclerosis during filming of the final season, but she was determined to finish strong.