It’s funny to think about what we used to take for granted: that actors could see each other; that if the stage lights allowed, they could see the audience, too; that we could occupy the same space at the same time, living through the same event.

Two shows at the Public Theater’s Under the Radar Festival, “Capsule” and “Disclaimer,” investigate how theater might speak to us now, when most of us consume it from well beyond the balcony and when acknowledging differences in identity and lived experience can make us feel further away than ever.

“Capsule,” a fragmentary song cycle from Whitney White and Peter Mark Kendall, snakes through the past spring, summer and fall, marking the time, as Kendall says, “between sourdough and losing our minds.” Hazily linear, the prerecorded piece owes less to the clock and the calendar and more to the emotional fever chart that each fresh hell — the pandemic, the killing of George Floyd, the West Coast wildfires, the death of Ruth Bader Ginsburg — induces.

White, who mostly works as a director (“What to Send Up When It Goes Down,” “Our Dear Dead Drug Lord”), and Kendall, an actor (“Blue Ridge,” the recent “Lessons in Survival,” which he co-conceived), play themselves. She comes across as sable-voiced, graceful, effortlessly emotive. He is gawkier, with an almost formal reserve.

Co-directed by Taibi Magar and Tyler Dobrowsky and shot by Jess Coles in the actors’ separate homes, on the city’s streets and in what looks like an upstate retreat, the piece presumes a long intimacy between them, though it leaves the contours of that relationship unspecified. 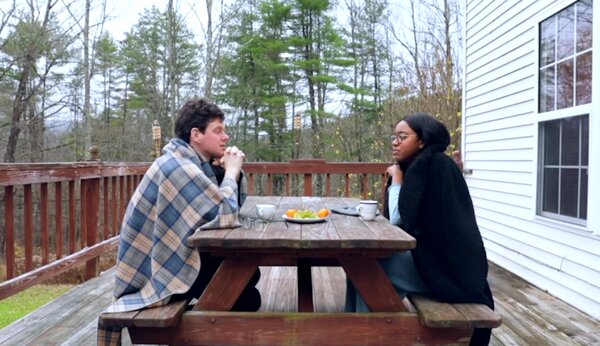 The opening moments make their differences explicit. White announces herself as female, Black and single. Kendall is, he says, male, white and married. Which means that each has negotiated these months differently, in ways the other may never be able to understand. But we don’t know how much each can or can’t grasp, because in place of sustained discussion, “Capsule,” which runs about 50 minutes, provides brief, slow-groove songs and elliptical, if painful, chat (corsets, “John Wick,” the limits of empathy).

An inchoate show about an inchoate time makes a kind of sense, an enmeshing of content and form. And some happenings are so fraught that they can’t really be communicated head-on, at least not immediately. Then again, it would have been nice to see White and Kendall try.

Preshot, premixed and pre-edited, the work arrives complete and available on demand. So while it sometimes feels visceral, it rarely feels like theater. And as a product of the times, “Capsule” already seems slightly out of date, concluding as it does before the November election and the subsequent violence.

But some of its music will resonate, particularly the opening number, which some of us may adopt as a personal theme. Here’s how that one begins: “Everything’s not fine.”

Don’t look for Chef Nargis, the chirpy host of “Disclaimer,” a new show from Piehole, to sing along. The lead instructor for a Persian cooking class delivered over Zoom, she spends much of the opening monologue carrying on brightly even as her recipe, for sabzi polo, a rice dish steamed to greet the new year, goes awry.

Hours or days before the class, audience members receive a shopping list calling for basmati rice, oil, butter, garlic, saffron, some fenugreek if you can find it. Yet these aren’t all the essential elements of “Disclaimer” — a lesson, a confession, a political meditation, a toy theater show and a murder mystery created by Tara Ahmadinejad, who also plays Nargis. This is a pilaf with a hefty body count.

As audience members log in, Nargis chats about ingredient prep and her assistant Chef Hassan (Hassan Nazari-Robati), on a separate camera, displays herbs in tidy bowls. “I’m going to keep it light and fun!” Nargis promises, somewhat frantically, as she measures rice.

At the Friday evening performance I attended, only about five of the 50 or so Zoom windows showed people measuring alongside her. Nargis didn’t seem quite ready to cook either. She conducted strained conversations with Hassan, phoned her mother for advice, burned a tray of Bagel Bites. (Relatable.)

Cooking, as Nargis explains, isn’t really the point. She is Iranian-American, and she has come here to unpack not shopping bags, she says, but “some of the themes and issues related to this identity of mine.”

Unlike so much remote theater, “Disclaimer” feels purpose-built for Zoom and sensitive to its chat and view functions. If you fear audience participation, keep your camera off. But while secure in its technology, it feels garbled in its purpose. A frenzied attempt to explain Persian culture — and possibly a more considered study of the incomplete ways we understand what is foreign to us — the piece piles form upon form and genre upon genre, in ways that are deliberately and not so deliberately frustrating. (Piehole, a company both cerebral and gonzo, tends to favor this approach.)

Like the sabzi polo we are meant to cook, “Disclaimer” feels unfinished, its flavors sharp but unmingled. That saying about too many cooks goes for too many ingredients, as well.

Capsule
On demand through Jan. 17; publictheater.org