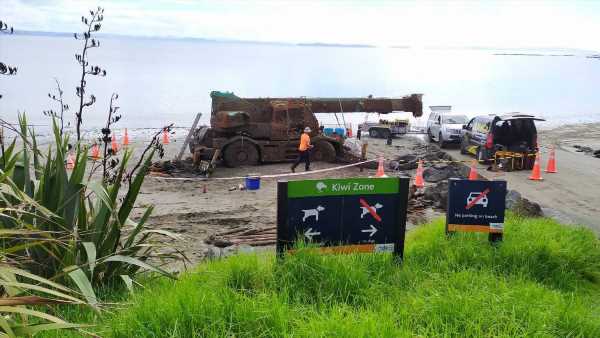 Jim spotted this scene at Army Bay off the Whangaparaoa Peninsula. “The word on the street is that it fell off a barge, possibly army doing training manoeuvres off their base?” he writes. “It’s an expensive bit of kit though.”

A popular TikTok user posted a video showing himself prodding, picking up, and even licking a strikingly coloured blue jellyfish that lay on the beach. Alexa_reed2, who has almost 1 million followers said: “Look guys, a jellyfish is still here,” he states in the short clip. “I’m going to pick it up. This is how it looks like – yes, it is a jellyfish, look how big it is. It’s still moving! I’m going to lick it.” Unbeknownst to Alexa, a makeup artist and self-proclaimed “CEO of eating bugs”, his new jelly friend is actually a Portuguese Man o’ War (or Bluebottle), one of the most dangerous jellyfish in the ocean. Known for their intensely painful stings that leave welts on unfortunate swimmers caught by their tentacles, these “floating terrors” frequent the beaches of Australia and are responsible for up to 10,000 stings to humans per year. There have even been reported cases of Bluebottle stings resulting in death, particularly in vulnerable people.

Applause Encouraged #111415 by Scott Polach was Installed as part of Convergence, a site-specific show at Cabrillo National Monument in San Diego. Guests were checked in by a greeter, asked to turn off their phones, reminded not to take any photos for a 45-minute duration and ushered to their seats. At the last light the group applauded, and participants were offered refreshments.

Love pool and want to play on your superyacht?

Bugatti, a company known for its exclusive sport cars, recently unveiled a $300,000 luxury pool table that relies on highly advanced gyroscopic technology to remain perfectly level in any conditions, making it usable on yachts. There are a few things in this world that money can’t buy, and until now, playing pool at sea was one of them. Try as they might, engineers could not design a table to negate the rocking of the boat and remain level. Until now, that is, because Bugatti apparently managed to create a self-leveling pool table that will allow the rich and powerful to enjoy a game of billiards on their expensive yachts.

Strange encounters with other humans

1. “Doing my makeup on the train this morning and a random man told me he likes women to have a more natural look. I told him I like men to have a more silent look.”
2. “At a cousin’s wedding a guest was inebriated and thought he’d had a stroke in the bathroom as he couldn’t straighten himself. Turned out he’d buttoned his waistcoat to his trousers and couldn’t stand up.”
3. “My ex explained to me what a pillow is used for. He said the pillow is used to support the neck and the head.”