When the cellist Yo-Yo Ma needed a new headquarters for his Silk Road Project in 2005, Roger Mandle, then president of the Rhode Island School of Design, gave the organization a home on his campus.

When a member of Qatar’s royal family was looking to make her country into an art destination in 2008, Mr. Mandle took on the development of more than a dozen museums in Doha.

And when some in 2016 questioned the quixotic nature of a start-up art museum in New Bedford, Mass., Mr. Mandle persevered and — together with his wife, Gayle Wells Mandle — succeeded in establishing the Massachusetts Design Art & Technology Institute.

Mr. Mandle died on Nov. 28 at his home in Dartmouth, Mass. He was 79. Ms. Mandle, a mixed-media painter, said the cause was cancer.

“Roger Mandle had the soul of an artist, the character of a gentleman and the wisdom of a statesman,” Mr. Ma said in an interview.

Mr. Mandle served as executive director and chief officer of museums at the Qatar Museums Authority, overseeing the Museum of Islamic Art and the Qatar Natural History Museum, among others, from 2008 to 2012.

Working closely with Sheikha al Mayassa bint Hamad bin Khalifa al-Thani, then the most important buyer in the art market, Mr. Mandle organized the construction of several museums, including the National Museum of Qatar, designed by the Pritzker Prize-winning architect Jean Nouvel.

“He helped create a road map for the development of the Qatari art program,” said Edward Dolman, the chief executive of the Phillips auction house, who spent three years as the director of the sheikha’s office and also served as the acting chief executive of Qatar Museums.

“The great thing about Qatar at that time,” Mr. Dolman said, “was you could experiment, and there was lots of talk about the role of museums.”

Earl Roger Mandle was born on May 13, 1941, in Hackensack, N.J., to Phyllis Key Oberg Mandle, who worked in apparel design, and Earl Simmons Mandle, a graphic designer who went into the family meat business.

He started out wanting to be an artist and majored in painting at Williams College. He switched to art history and museum studies while earning his master’s degree in 1967 at New York University’s Institute of Fine Arts. 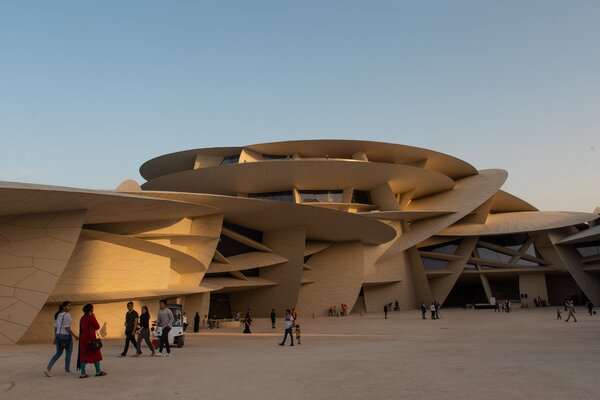 Mr. Mandle became an expert in 18th-century Dutch painting and, as associate director of the Minneapolis Institute of Art, organized an important exhibition on the subject.

That show earned him the attention of the Toledo Museum of Art in Ohio, where he spent about 15 years, first as associate director and then as director. He organized a major exhibition of El Greco, the 16th-century Spanish artist, that drew record crowds in 1982 and that, The New York Times said at the time, was “recognized as the most important exhibition on that artist ever assembled.”

During that period, Mr. Mandle also served as a member of the National Council on the Arts under Presidents Ronald Reagan and George Bush, helping shape U.S. art and design policy.

Mr. Mandle became president of the Rhode Island School of Design in Providence in 1993. Over 15 years he quadrupled the school’s endowment to $400 million and oversaw the creation of a museum designed by another Pritzker Prize–winning architect, Rafael Moneo.

While presiding over the Rhode Island School, Mr. Mandle wrote his dissertation at night on 18th-century Dutch art. He earned a Ph.D. in 2002 from Case Western Reserve University, even as he remained accessible to students.

“He never missed an opportunity to meet with students despite his busy schedule,” said one entry on a website created in his honor. “They adored him.”

Joe Gebbia, a founder of Airbnb and a Rhode Island School of Design alumnus, wrote on Twitter that Mr. Mandle “was an early supporter of my entrepreneurial pursuits on campus.”

After Mr. Mandle returned from Qatar to the Rhode Island area, he served on numerous boards, including those of the American Association of Museums, the Williams College Museum of Art, the Clark Art Museum and Silk Road.

The design institute he and his wife founded has been able to continue presenting free contemporary art exhibitions, performances and educational programs in various outdoor locations.

In addition to his wife, whom he married in 1964, Mr. Mandle is survived by a son, Luke; a daughter, Julia Mandle; a sister, Julia Kiechel; and five grandchildren.

Mr. Mandle’s other great passions were gardening and poetry. He often combined them.

The family, in a statement, called gardening “a fine metaphor for his life’s philosophy of lovingly nurturing and mentoring all of those around him to reach for their highest potential.”

In one poem, he wrote:

On the back of my neck I feel warmth now, coming
Spring; time to till it all under. Ready the ground
For the next round: devil’s tongue, iceberg, arugula!
The throb of the tractor’s hub, the shovel’s schlump —
I stab at the dirt, turning out the last of the chill.