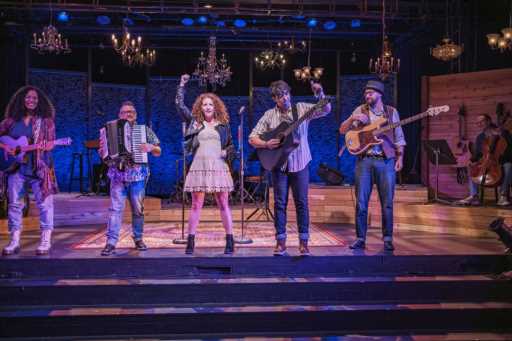 In the sweetly unique musical “Hundred Days” — on stage at the Aurora Fox — two lovers cycle through their years as a couple not by growing old in front of the audience but by cramming as much life as possible into every moment. And then telling us about it.

An autobiographical musical based on Abigail and Shaun Bengson’s whirlwind romance, “Hundred Days” is all about direct address and unabashed confession. Steph Holmbo’s Abigail is a vibrant over-sharer. Runner Francisco’s Shaun is more subdued (or is it sub-dude?) but just as ready and lyrically able to recount their love story.

“Being alive means being in grief,” Abigail says to the audience by way of introduction. “Show of hands.”

The New York-based pair married within three weeks of meeting. Known as the twangy folk rocking group the Bengsons, the couple (along with Sarah Gancher, who co-wrote the book) have packed joy and angst, friskiness and fretting, and some fine strumming, belting and handclapping into this lovely concert-play that might have verged on TMI were it not so vividly written and performed.

“All my life, I’ve been looking for you,” the duo and the onstage band sing in “Vows,” adding, “I’ll take my pride and lay it at your feet.”

When Abigail was 15, something dreadful happened to her, her family, their community. What that was she never says here, but she’s clear it was harrowing. Some people “lost their lives,” some “were hospitalized” and some “lost their minds,” she tells us. The wounds of that event have become hard-wired, a kind of anticipatory grief.

“I Do! I Do!” Book and lyrics by Tom Jones. Music by Harvey Schmidt. Based on “The Fourposter” by Jan de Hartog. Directed by Rod Lansberry. Featuring Adriane Leigh Robinson and Marco Robinson, or Twyla Wilson and John Donovan Wilson. Through Oct. 10 at the Arvada Center, 6901 Wadsworth Blvd., Arvada. Tickets: 720-898-7200 or arvadacenter.org

Even not knowing all the sad details of that family tragedy, we can see Abigail is something of a fatalist. So not only was she smitten, but she was also certain of impending doom. She had a dream that new love Shaun had only 100 days to live. That anxiety doesn’t make for an easy courtship. But it does infuse this winsome musical about falling hard into love, being terrified it will shatter and knowing even if it doesn’t, The End will come.

Their fourth-wall-breaking dialog often evokes the charming, self-deprecating storytelling of The Moth podcasts. About their first date, at a diner, Abigail recalls: “I was experimenting with not eating.” Shaun shares: “I was a vegan! Which is to say, I was insufferable.” Because he’s a kind guy, he adds, “Not that all vegans are insufferable.” Abigail’s a bit more complicated. She returned to her apartment to break up with her then boyfriend. And Shaun actually does have a story he knows doesn’t cast him in the best light. What we know from their tuneful accounting of love and its near implosion is that the two are intricately human.

The Aurora Fox was right to tout its reteaming of director Nick Sugar and music director David Nehls for this musical. Their work on the Fox’s “Hedwig and the Angry Inch” was a revelation. “Hundred Days” is a less willfully noisy, more gently brooding. It invites comparisons with “Once.”

Scenic designer Brandon Philip Case has created a lovely space for the musical to unfold with minimal fuss, hanging guitars on the walls for practical and beguiling purpose. There’s an expert and twangy onstage ensemble of musician-actors. Nicole DeBree (guitar), Nehls (accordion), William “Skip” Lynch (percussion), David Short (cello) and Jason Tyler Vaughn (bass) make fine use of the instruments. They also act as a funny-sympathetic Greek Chorus to Abigail and Shaun’s tale.

Toward the end of “Hundred Days,” Abigail and Shaun imagine their future — perhaps with a dash of confidence. They stand onstage envisioning the sweet possibilities of their fourth, fifth, sixth, and so on decades.

Across town from “Hundred Days,” Agnes and Michael live their decades together in front of the audience in the Arvada Center’s first in-person mainstage musical in more than a year. “I Do! I Do!” gives the center’s tried-and-true patrons something just as tried and true: old-fashioned, easy on the noggin’, sleekly produced entertainment.

With book and lyrics by Tom Jones and music by Harvey Schmidt, “I Do! I Do!”  follows Agnes and Michael from the day of their wedding to the day when they plan to hand over the keys of their home to a pair of newlyweds 35 years later. The show’s tagline is “A Musical About Marriage,” and a lot of ground is covered: wedding night nerves and next-morning adoration, frustration and doubts, money and interdependence. Although we never see them in this two-hander, children figure in, too.

The show is based on Jan de Hartog’s play “The Fourposter.” And a big fourposter bed sits in the center of Brian Mallgrave’s elegant and simple set. To the left of the bed are Michael’s vanity and a leather armchair. To the right, Agnes’ vanity and a patterned upholstered chair. Like a gender-reveal party, from time to time, the show teases a his-or-her color scheme. Michael’s nightgown is blue with stripes. Agnes’s wears a deep pink dress. (Clare Henkel’s costumes for Agnes are especially fetching.)

Two married couples have been cast as Agnes and Michael: Adriane Leigh Robinson and Marco Robinson and Twyla Wilson and John Donovan Wilson. The afternoon I attended, the Wilsons were onstage. They couldn’t repress an affable vibe even when their characters started to rankle each other, even when Michael was spectacularly full of himself. And there’s a gorgeous ease to Twyla Wilson’s singing that elevates the show.

Jones and Schmidt wrote a couple of very pretty songs here that became hits, the kind that still hold their own on oldie stations. “Together Forever” and “My Cup Runneth Over” top that list. (Jones’ and Schmidt’s more inventive “The Fantasticks” is currently playing Town Hall Arts Center in Littleton, through Sept. 17.)

“I Do! I Do! was nominated for the best musical Tony in 1967. But that year’s winner suggests people were hankering for something edgier: “Cabaret” won. “I Do! I Do!” has become a prattle of the sexes made pleasant by its leads.

Two very different musicals featuring married couples arrive at the same time, seemingly cozying up to two different demographics. Neo-folk-rockers Abigail and Shaun haven’t much in common with Agnes and Michael, yet each pair wrestles with what time means for a couple: how it passes, how it is filled up with plans and dashed plans, and how those everlasting vows ride on renewed volition.