It was strange enough to be watching a performance in person. Try being in a park at twilight and sitting on the same stage as the performers: a sheet of ice. The audience’s portion of the rink was covered, but there was still a bracing breeze — despite the mild April night — right around the ankles.

On Tuesday, the Brooklyn Academy of Music presented its first live performance in more than a year with Le Patin Libre (“free skate” in French), a contemporary skating company from Montreal. The performance, at LeFrak Center at Lakeside in Prospect Park, even brought out Mayor Bill de Blasio who, in a speech before the performance, said that “when the cultural community comes back, all things are possible.”

That’s probably because culture is usually one of the last things to come back, but oh well — it has been a long year. It was nice to see bodies moving in space. And skating represents something bigger than a blade and a body: It’s the idea of soaring, of flying, of resisting gravity. By nature, skating is an uplifting act and art.

Because of its in-person rareness, this show, a hybrid of skating and dance, had much to live up to — too much perhaps. Not every show will deliver transcendence, though after so much time away from live performance, that is an expectation, for better or worse; “Influences” was not particularly bad, but it was hardly euphoric. 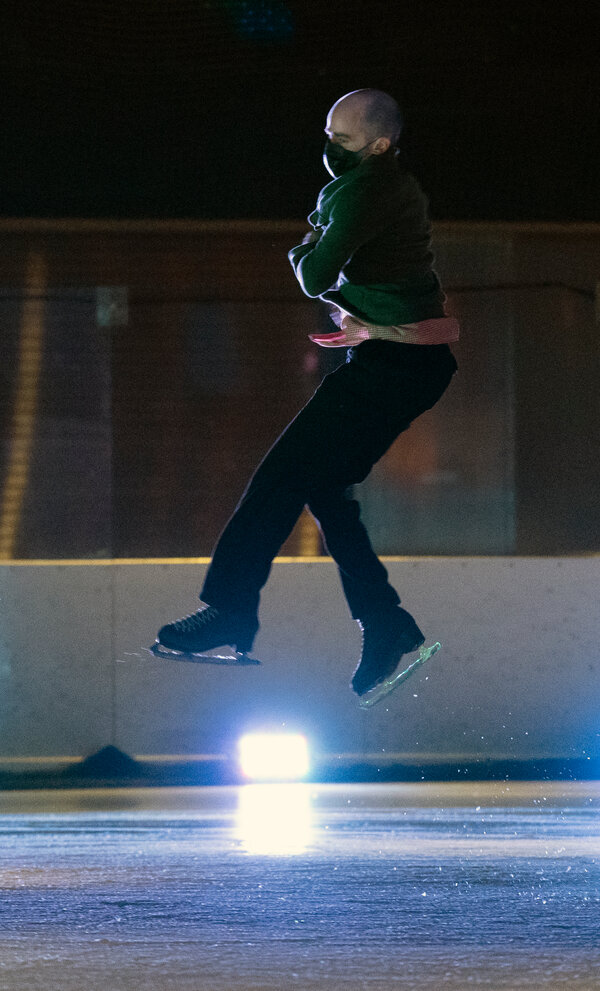 As for the performance itself? It was fine to a point — this ensemble, formed in 2005 by Alexandre Hamel and other skaters, is dedicated to making skating more inclusive and celebrating aspects that have nothing to do with earning scores at competitions. (All the same, the audience applauded most happily for the tricks.) I love skating, especially when it is otherworldly, hypnotic; but Le Patin Libre’s program was full of starts and stops. The electronic score, at times, sounded like a tinny drum machine.

“Influences” was both the title of the program and of a 2014 work that filled out the second half of the evening to explore, often in obvious ways, the theme of the individual versus the group. Vignettes focused on bullying or the playful tension between rivals. This stand-alone work had a quality both rambling and predictable as the skaters took turns in featured moments. Taylor Dilley infused his skating with a martial arts sense of weight and control as he curled in deep, low turns with one leg hooked behind the other; Samory Ba, tall and lanky, possessed an elegant, unmannered daring.

All of the performers, including Pascale Jodoin and Jasmin Boivin — the group’s composer and musical director — are credited with the choreography, some of which could have been served better by a stronger point of view. This company is big on gliding, and that’s powerful: It’s what figure skating is all about. Yet even when skating phrases mirrored the intricate footwork of dance in interesting ways, the choreography got repetitive.

And throughout the night, there were moments of stomping and tapping in which skaters treated the ice like a dance floor; it doesn’t always look as innovative as it must feel. In a way, the short introductory pieces — no titles were given — were more succinct in how they showed the tight-knit quality of the group. Exhilarating moments of birding, when skaters move as one as a flock of birds or a school of fish, revealed the rush of momentum: deep edges, flow and, again, that glide.

In the final short work, Jodoin, the only woman and one of the group’s directors, led the others in a back-and-forth pattern that snaked smoothly across the expanse of the ice. Eventually their space became more constricted as the skaters — their arms swaying, their blades moving briskly — wove in and out of a tight figure eight. The lights dimmed as their blades continued scraping; now in silhouette, the skaters drove their bodies with a vigorous, muscular ease. It was beautiful to watch but even better, somehow, to feel: Even though they were wearing masks, you could sense that these bodies were breathing as one.