With its latest show, the Geffen Playhouse in Los Angeles has cornered the American market on long-running, agreeable online theater. 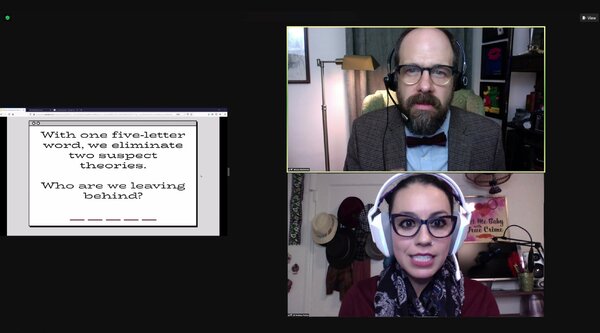 On Feb. 2, 1922, the body of the Hollywood director William Desmond Taylor, shot once in the back, was found on the floor of his plush Los Angeles bungalow. The crime remains unsolved — until you log in.

The Taylor murder provides the chilled spine for “Citizen Detective,” a playful, slightly sinister new Zoom experience from the Geffen Playhouse, which has temporarily rebranded as the Stayhouse. With “The Present,” “Inside the Box” and now “Citizen Detective,” this company has cornered the American market on agreeable online theater that runs and runs and runs. (Maybe they could share this know-how with some major nonprofits in New York, where efforts are paltry by comparison?)

Chelsea Marcantel, the show’s playwright and director, has cannily structured it as an online seminar in which the best-selling crime writer Mickie McKittrick (Mike Ostroski) coaches amateur gumshoes (that’s us ticket holders) on the finer points of murder solving. This is, McKittrick says, “a golden age of citizen detective work.” His training session, he says, will help us to sleuth ethically and more effectively, using the Taylor case as a model.

A preshow survey sorts the audience members — about 40 on opening night — into six working groups. Mine? It was called Mixed Nuts: four women in glasses, plus identical twin brothers. After McKittrick’s introduction, breakout rooms open, and each group sifts through a particular tranche of Taylor evidence. Then they return to the main meeting to argue guilt and innocence. Barring a twist or two and a handful of preposterously easy puzzles, that’s the show. 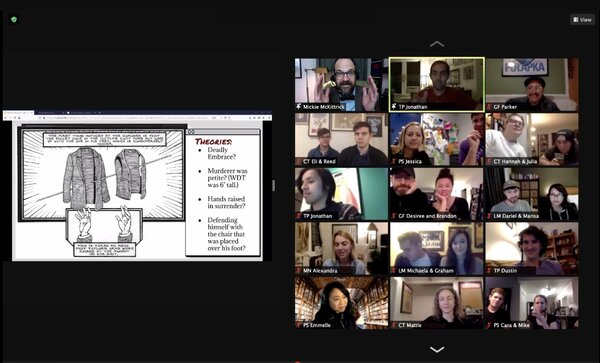 Theatrically, this is very thin stuff, a sugar wafer of a play. Only two credited actors appear: Ostroski’s tweed-jacketed, self-satisfied author and Paloma Nozicka as Andrea, his overeager protégée. (Andrea hosts a podcast called “Hit Me Baby With True Crime.”) There’s also a house manager, uncredited, who does a lot of heavy preshow lifting — the party chat equivalent of CrossFit. Is there also a celebrity cameo? Let’s leave that a mystery.

The flimsiness of character and dialogue shifts the burden — of both narrative and proof — onto the audience, though participation remains voluntary. How much crime and true crime entertainment a given crowd consumes shades the evening. A woman in my group briskly dismissed a suspect as too obvious. “In ‘Law & Order,’ in the first half, you always think it’s that person, but it’s not,” she said. Personal experience also colors case theory. The leader of one group, the Creative Types, proposed an alternate suspect, the victim’s accountant. “It’s because I’m a C.P.A.,” he said. “I’m just trying to give equal time to the accountants of this world.”

This interactivity, however idiosyncratic, doesn’t alter the show much. The script rolls on regardless, though a choose-your-own-adventure element does surface toward the end. But Marcantel clearly enjoys the online form, neatly juxtaposing the workaday tools of contemporary online culture — polls, slides, breakout rooms, screen sharing, chat, the mute button — with a lurid case nearly a century cold.

And the case itself is fascinating. So fascinating, in fact — with its cocaine, blackmailers, child starlets, two (two!) sinister valets and Mabel Normand — that I didn’t realize it was a real incident until embarrassingly late in the evening. (I then stayed up even later, reading.) Those who have seen the musical “Mack & Mabel” will have a virtual leg up. They won’t have to use that leg to kick themselves, like I did.

If “Citizen Detective” isn’t much of a play, it is still, for anyone who likes to shout back at cop shows or flip to end of a murder mystery to see if they guessed right, appealing entertainment. For extra fun, switch your Zoom window to gallery view to see your fellow solvers cogitating furiously in the glow of their screens, endlessly hopeful that their theories about bullet trajectories and abandoned daughters might just make a cold case warm.