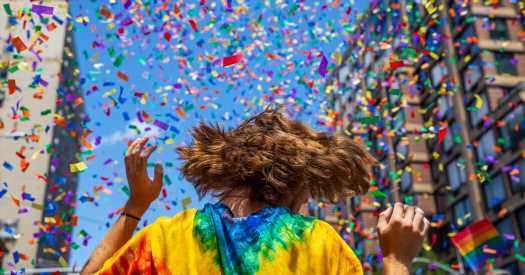 Take a look at New York City’s Pride Month programming, and the pandemic-related clouds that shadowed Pride 2020 appear to be passing. Thanks to new state rules that ease mask mandates and capacity limits, many events this year can take place not from behind a screen but in person. People aren’t wasting time: Many events have sold out quickly.

The pandemic isn’t over, of course. Many businesses and organizations still have Covid protocols in place, and rules could change at the drop of the hat.

But Pride is regaining some of its sparkle this year. From family-friendly afternoons to potty-mouthed drag queen nights, here’s a selection of in-person events to help make this Pride Month a reason to — finally! — celebrate face to face.

Most events for NYC Pride, including the annual march in Manhattan, will again take place virtually. On Pride Sunday, June 27, ABC-7 plans to broadcast performances, interviews and on-street activities from noon to 3 p.m. on air and at abc7ny.com.

A few events will be open to the public. PrideFest, the annual free street fair, will take place in Greenwich Village; organizers will announce exact locations and other details soon. Heritage of Pride, the group behind NYC Pride, is also partnering with local businesses on a series of outdoor-seating pop-up events throughout Manhattan.

The Reclaim Pride Coalition’s Queer Liberation March, which organizers bill as a “no cops, no corporations, no politicians” event, also takes place June 27, starting at Bryant Park and finishing with a rally in the West Village. (The group was one of several queer organizations that cheered NYC Pride’s recent announcement that uniformed cops, including members of the Gay Officers Action League, could no longer take part in the official march; the decision has spurred a backlash.)

Other Pride events around New York include Brooklyn Pride (June 12), which turns 25 this year, and Long Island Pride (June 13). In-person events in New Jersey feature walks in Atlantic City and Montclair to benefit the advocacy group Garden State Equality (June 12) and a Pride picnic in Maplewood (June 13). Connecticut events include the 34th Connecticut LGBTQ Film Festival in Hartford (through June 13) and a free Pride in the Park event in Ridgefield (June 26).

Bronx Pride just announced a series of events that will culminate in festivities on June 17 featuring drag performances, comedy and vendors on Barnes Avenue. Organizers in Queens have said they plan a series of events this summer, including a march in August. Staten Island’s main Pride celebrations took place in May, including the opening of the Pride Center of Staten Island in its new location in Clifton. 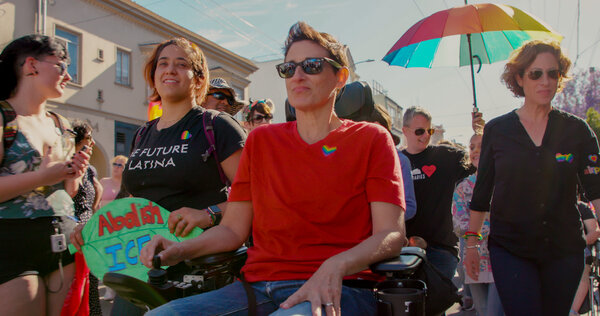 Two new documentaries explore creative sides of queer history. Now at the IFC Center is “Ahead of the Curve,” directed by Jen Rainin and Rivkah Beth Medow, which tells the roller-coaster story of the glossy lesbian lifestyle magazine Curve. “Truman & Tennessee: An Intimate Conversation,” opening June 18 at Film Forum, weaves together words, real and literary, from Truman Capote and Tennessee Williams. The film, directed by Lisa Immordino Vreeland, is voiced by the out actors Jim Parsons as Capote and Zachary Quinto as Williams.

Juneteenth meets Pride on June 19 and 25 when the Museum of the Moving Image presents “Daughters of the Dust” (1991), Julie Dash’s groundbreaking magical realist indie about five Gullah women, including a lesbian character, on an island off the coast of South Carolina in 1902.

Restart Stages, the newly launched outdoor performing space at Lincoln Center, is partnering with the National Queer Theater on new theater pieces as part of the Criminal Queerness Festival (June 22-26), which supports international playwrights, many of whom experience threat and censorship. Other performances at Restart Stages include a concert featuring the performance artist Taylor Mac and a commissioned performance by the poet and activist Staceyann Chin.

On June 10, the Joyce Theater will livestream a performance of “Giselle of Loneliness” by Ballez, a dance company that puts a queer spin on classic ballets.

Ariana DeBose, Alex Newell and other performers from the worlds of Broadway, television and social media will convene on June 17 for “Glimmer of Light,” what Playbill is calling its first live concert event celebrating Pride. A benefit for the Born This Way Foundation, the show takes place at Radial Park in Halletts Point, Queens, and will stream the following week .

New York City Opera heads to Bryant Park on June 18 for a Pride-themed evening concert featuring works from the worlds of opera and musical theater. The performance will also include a new arrangement of the finale from Iain Bell and Mark Campbell’s opera “Stonewall,” a City Opera commission that the company premiered in 2019.

On June 20, the Alice Austen House Museum on Staten Island will present a free performance of music and dance by L’unicorns, a Latinx L.G.B.T.Q. group. On view at the museum is “Radical Tenderness: Trans for Trans Portraiture,” an exhibition of photographic works from four trans and nonbinary artists.

Missing “Naked Boys Singing”? How about naked boys camping? That’s what’s happening in “Camp Morning Wood: A Very Naked Musical,” a new queer comedy about a nudist camp and the conservative Christian politician threatening to close it. The show features a book and lyrics by Jay Falzone and music by Trent Jeffords, Derrick Byars, Matt Gumley and Jeff Thomson. It runs at the Asylum Theater in Manhattan, June 4-20.

Fans of the Real Housewives series may get a kick out of the new musical comedy “The Housewives of Secaucus: What a Drag!,” a new interactive comedy about five very competitive Garden State gals, including Anita Martini and Carla Cavatelli. Written by Anthony J. Wilkinson (“My Big Gay Italian Wedding”), the show plays weekends at the Actors Temple Theater in Manhattan.

Monica Bauer’s “Made for Each Other,” a romantic comedy about gay marriage and aging, will be presented as pop-up shows for audiences of no more than 16 people. The location to meet will be emailed to ticket buyers in advance of each performance. It runs through June 24.

On Saturday, the Brooklyn Museum hosts “Still Here, Still Queer,” a free outdoor afternoon of L.G.B.T.Q.-themed events, including a drag and burlesque performance honoring famous queer and trans people from the Brooklyn-based collective Switch n’ Play. There will also be a Brooklyn Pop-Up market spotlighting L.G.B.T.Q. artists and vendors.

On view through June 26 at the Leslie-Lohman Museum of Art in Soho is “Laura Aguilar: Show and Tell,” the first comprehensive retrospective of the photographer, whose work explores feminist, queer and Latin identities. In his review for The New York Times, Holland Cotter said Aguilar, “a large-bodied, disabled, working-class Latina lesbian,” stands “as a figure who was shaping a future that is our present.”

On view outdoors at the New-York Historical Society is “Safe/Haven: Gay Life in 1950s Cherry Grove,” a free exhibition that looks at how the gay and lesbian community prospered in Cherry Grove, a small community on Fire Island, N.Y., after World War II. The show includes some 70 photographs and other materials from the Cherry Grove Archives Collection.

The NYC LGBT Historic Sites Project offers a series of self-guided tours of significant queer locations across New York City. Many of the tours are grouped by theme, like lesbian activism and transgender history. The Village Pride Tour includes stops at Christopher Park, across from the Stonewall Inn, the landmark bar Julius’ and the former home of the Sea Colony, a popular lesbian watering hole.