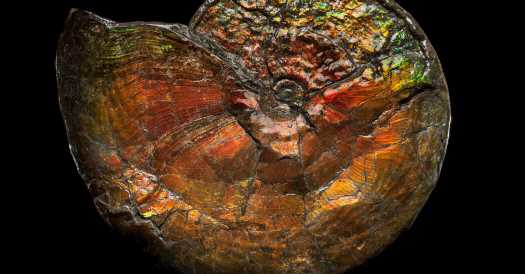 It is a gem with a living past. The ammonite, formed by millions of years of compression and mineralization, has an opalescent quality, iridescent as prisms of light diffract off its coiled outer shell. More than 70 million years ago, that shell housed a now-extinct creature, a cephalopod that was a member of the squid family.

Found in the Canadian province of Alberta, the whorled fossil, more than 14 inches tall and 16 inches wide, will be for sale at this year’s Masterpiece Online fair by the gallery David Aaron.

It is not the only prehistoric natural object that will be offered at the sale. ArtAncient, a gallery that deals in antiquities and, increasingly, elements of natural history, is offering a “gogotte,” a sandstone concretion formed roughly 30 million years ago near Fontainebleau, France, when superheated water flowed through tiny grains of sand, fusing them into an intricate formation resembling a sculpture.

The market for natural history, and especially fossils, has exploded in recent years, even among collectors who usually buy fine art and antiquities. “This is a growth area, because I think people are increasingly interested in diversifying their collections and surrounding themselves with beautiful and historically important objects that are imbued with meaning,” said Salomon Aaron, director of David Aaron. “Natural history is really a very, very fascinating area of the art market right now.” 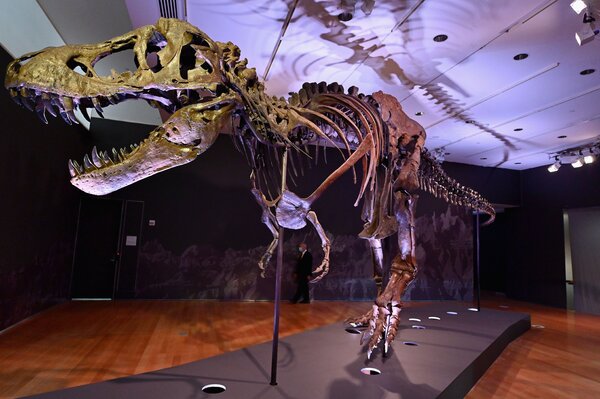 Dinosaur skeletons are the hottest commodity in the growing market. The most recent iteration of fossil craze began, perhaps, with Sue, a complete Tyrannosaurus rex skeleton sold in 1997 for $8.36 million.

Then there was Stan, another complete T-rex, that sold at auction at Christie’s last year for a record-shattering $31.8 million. James Hyslop, head of science and natural history at Christie’s, said that he had seen the market grow every year since 2007.

But it is not entirely new. Mr. Hyslop said this kind of periodic enthusiasm had roots in the 19th century. “Certainly throughout the Victorian period, the very best fossils were on par with the most expensive paintings in the world,” he said.

“The market for American fossils is going through the roof, especially when it comes to dinosauria,” said Tom Lindgren, a natural history specialist for Bonhams, which last month held a natural history auction that included a tyrannosaurus tooth that sold for $11,475 and a double butterfly in amber that went for nearly $38,000.

“When Christie’s sold the T-rex, it got people champing at the bit, wondering, when is the next Stan going to appear?” he said. “It created a real dinosaur rush, like the gold rush of the late 1800s in California and the West. Now we’re seeing a dinosaur rush in that part of the U.S.”

The American West is rich in fossils, especially in Wyoming, Montana, Utah and Colorado.

And in the United States it is legal to sell and export fossils found on private land. Many other countries heavily regulate fossil sales, or forbid exports altogether, something dealers have to be cautious about when establishing provenance. (In recent decades, fossils have been illegally exported from Mongolia and China and stolen from public lands in the United States).

“As a gallery we are very concerned with provenance, so whatever we buy, we take exceptional steps to be comfortable with the provenance,” Mr. Aaron said.

But even the legal sale of fossils has caused consternation and alarm in the scientific community, as more and more fossils go into private hands at higher and higher prices.

“The commercial market is not good for our science,” said Jim Kirkland, the state paleontologist of Utah. He has been trying to track down a fossil fish skull critical to his research for decades, but after it disappeared into a maze of private hands, it is nowhere to be found, he said.

“These are world-class specimens, a lot of them coming out of Montana and Wyoming, from private ranch lands, and that’s completely legal,” Mr. Kirkland said. Because fossils are selling for so much, more ranchers are leasing land to private excavators for extra income.

“Stan sold for more than $30 million,” he said. “When ranchers hear those kinds of numbers, as a scientist you don’t get to work on ranches anymore.”

Many dealers do approach museums first, Mr. Kirkland said, and try to avoid selling items of scientific value. “Anything of scientific importance, we try to stay away from auctioning,” Mr. Lindgren said.

But the lines are blurry; parts of what Mr. Kirkland says he believes to be a fossil of a not-yet-identified species of dinosaur are scattered all over the United States, separated before research could be done. “The commercial guys didn’t know that it was new, and if they had they wouldn’t have sold it, but it’s been piecemealed,” he said. “It’s tragic sometimes. I just wish museums had the money.”

These issues may be less problematic when it comes to specimens like ammonites and “gogottes,” both of which of which have been widely studied. But they remain scarce and high-quality specimens are hard to find, which is part of the draw for private collectors.

“In the late ’80s and early ’90s, many ‘gogottes’ were found” in Fontainebleau, a site now closed to excavation, “so it’s difficult to get any fresh material from this locality,” said Costas Paraskevaides, founder of ArtAncient. “Pieces of this size and quality are really quite rare.”

The sculptural qualities of the large “gogotte” (25 by 44 inches) and the brilliant colors of the ammonite up for sale at Masterpiece make them interesting decorative objects, even for a collector who may be less well versed in natural history and science. The “gogotte” is priced at 150,000 pounds (about $205,000) and the ammonite at £38,000.

A dinosaur skeleton may coexist with contemporary paintings and an Etruscan vase — making it a kind of bold statement piece of the kind many collectors are seeking.

Mr. Lindgren said he recently worked with a private collector who had bought a 17,000-square-foot home in Florida and wanted a woolly mammoth skeleton.

“They wanted to have a skeleton standing with the glass in front, facing out to the ocean,” he said. “It’s an interesting part of the story, part of the theme of the home.”

But the appeal of owning a fossil is distinct from that of an art object, in part because of the miracle of its age. “It really puts things into perspective, the history of our planet, the nature of evolution, when you’re dealing with things which are 50 million years old,” Mr. Aaron said. “It makes you think about things when you celebrate your birthday.”