They whistled at it, paraded in it, posed against it, and, for a few moments, forgot themselves. They came to instill civic pride in their kids and remind themselves of all that New York could be. And they left with the satisfaction that comes when your city does something monumental, and does it right.

With its soaring expanses of glass and light, the new Moynihan Train Hall, which rises behind the colonnades of the Beaux-Arts James A. Farley Building across from Penn Station, has achieved the near impossible: It has left New Yorkers, 10 months into a harrowing pandemic, feeling transported and inspired.

On a recent weekend day, it also gave them something to do.

“Perfect quarantine activity,” said Mara Golden, who lives in Brooklyn, as she took in the sweep of the main concourse from a balcony last Saturday. Alongside her was her friend Samantha Stahl, who lives in Long Island City. Neither woman had gone out much during the pandemic, but had made an exception for the train hall, which Stahl said looked like an indoor park. 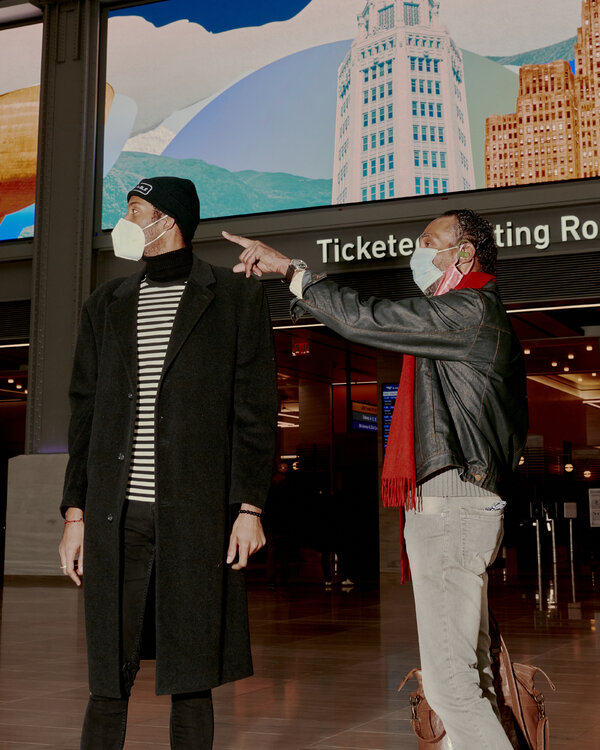 “This is our field trip,” Golden said. “Netflix, home, Moynihan, thank you.”

Clara Lipson and her husband, John Ricker, arranged to meet up at the hall with two of their friends from the West Village, Alba Gallo and Sigrid Esser, for a special outing. As they stepped into the main hall, the friends, who are in their 60s and 70s, slowed to a stop, their chins tilting up. As they took in the great space, they murmured approvals to one another behind their masks.

Lipson said she found the hall, with its massive exposed steel trusses, architecturally beautiful, and a welcome nod to old New York at a time when stark glass slabs are rising all over town.

“It’s like an icon of the city,” she said. “Already.” Then announcements for departing trains and their destinations came booming over the broadcast system, echoing throughout the hall. Gallo shook her head.

“The announcement is always … ” Gallo began.

“You cannot understand a word they are saying!” Gallo said.

Train announcements aside, the hall has been met with accolades. “It delivers on its promise, giving the city the uplifting gateway it deserves,” Michael Kimmelman, The Times’s architecture critic, wrote. A week after the opening, one Amtrak police officer was overhead calling it “the coolest place in New York right now.”

Across the hall from Lipson and her friends, Ben Manna, who is 24 and lives in Queens, was strutting back and forth. He was sporting a white hoodie from a clothing line he had just started up, as his friend John Padoginog, 25, from Long Island, took photos and video. They had spotted the hall on Instagram, and were drawn to it because they wanted to shoot Manna and his wares in a place that had clean lines and modern architecture. They were also few other public places in New York, let alone one of its transit hubs, that were as pristine. “This is pretty much the cleanest place in the city right now,” Padoginog said.

David Levinson Wilk and Irene Schneeweis arrived from Brooklyn around midday with three kids in tow — two of them theirs, plus a friend — and the express purpose, Levinson Wilk said, of showing the youngsters great public works.

The couple’s older daughter, Luisa, is an aficionado of New York history, and wanted to see this new chapter of it for herself.

“A lot of cool things come from here,” said Luisa, who is 10. “So I thought it might be cool to see the transition of an old post office, transformed into a new nowadays train station.”

Even in a pandemic, the hall has already become a destination for out-of-towners. Stevan Sandberg, a lawyer who lives in Rhode Island, carved out time to make a pit stop there on his drive to Washington. David Prieto, 32, a tourist from Colombia, was drawn to it after seeing photos on Instagram. Beneath “The Hive,” an art installation by Elmgreen & Dragset near an entrance on 31st Street, he took painstaking selfies of himself by carefully balancing his smartphone on the tip of his shoe. “It’s perfect, it’s beautiful, especially for a train station,” Prieto said, in Spanish.

Some of Saturday’s visitors remembered the original, glorious Pennsylvania Station built by McKim, Mead & White, which was torn down in 1963 to make way for Madison Square Garden. Larry Rubin, 80, who paid a visit to the new hall with Sandy Davies, 79, said he passed through the old building when his family took him to Florida by train when he was a kid.

Rubin, who toted a long-lens camera to the new hall for the occasion, remembers the great heights of the old Penn Station, and the sense of “permanence and an optimism” he felt inside it. The new Moynihan Hall may not be quite as grand as what was lost, but Rubin said it was an indisputable improvement to the underground Penn Station across the street.

“To come into New York and come into this,” Rubin continued, “as opposed to coming to that warren, that basement across the street, I mean just the atmosphere — it’s so much better coming here.”

Over and over again, people said the opening of the new hall was perfectly timed.

“This gives us hope for when this period is over,” said Leeworth Robateau, 23, an artist who walks dogs for a living. “It seems like New York is preparing itself for a new world.”