We all have our holiday traditions. Maybe yours is seeing the Rockettes at Radio City Music Hall and gazing at the Rockefeller Center tree, all done up in lights. Well, this year “The Christmas Spectacular” is canceled, and that Norway spruce is just sorry looking (though organizers swear the tree will be beautiful by the time of its lighting on Dec. 2).

Still, many rituals endure this season, repurposed for online viewing. Below is a selection of offerings — some beloved mainstays, a few cheeky upstarts — which you can indulge in watching from home.

The company that presented America’s first full-length “Nutcracker,” in 1944, is now offering what it calls the first “virtual Nutcracker experience.” Don’t expect cutting-edge VR. It’s a point-and-click tour of San Francisco’s War Memorial Opera House with extras embedded: a video class about pantomime, a printout activity book. Click on the stage curtain, and you get a 2007 recording of Helgi Tomasson’s 2004 production of the ballet. Set in San Francisco in 1915, this version is handsome, tasteful and visually rich, with a second act stuffed with unusual treats. (Available on demand Nov. 27-Dec. 31, $48; sfballet.org.)
BRIAN SEIBERT

One of the saddest blows to the musical season has been the loss of the explosion of versions of Handel’s “Messiah” that usually fill New York’s churches and concert halls in December. One of the grandest is put on by the conductor Kent Tritle and the Oratorio Society of New York, which is scaling down its large choir to a pandemic-size complement of 24, alongside an orchestra of 12, for this selection of excerpts filmed in the barn of Mr. Tritle’s home in upstate New York. The soloists are the soprano Susanna Phillips, the contralto Heather Petrie, the tenor Joshua Blue and the baritone Sidney Outlaw. And a treat: For the climactic “Hallelujah” chorus, other Society members will join in remotely. (Livestream on Dec. 21 at 8 p.m., on demand through Jan. 10; at osny.org.)
ZACHARY WOOLFE 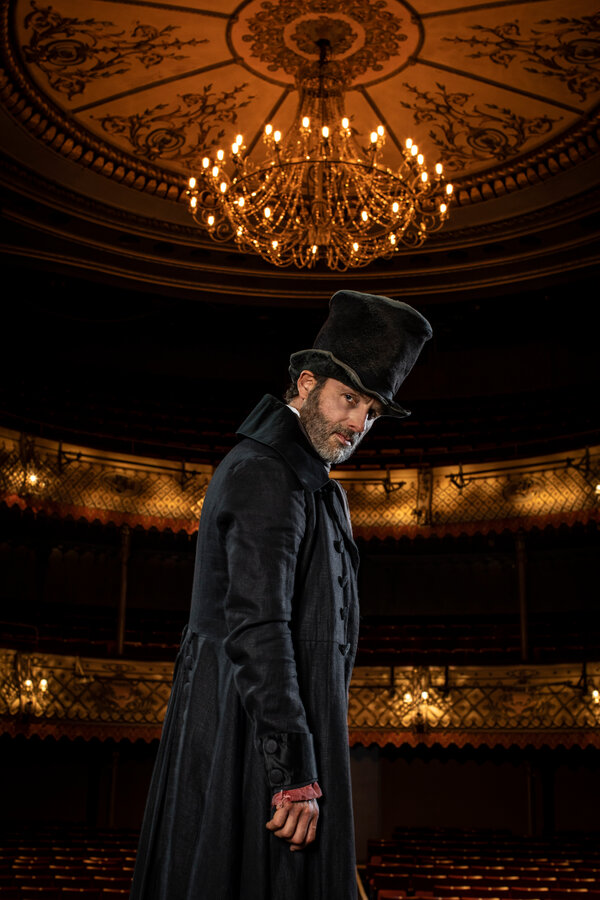 When a story is about a miser who must learn to share his wealth, its stage adaptation can hardly be stingy. Happily, the Old Vic production of “A Christmas Carol” being livestreamed from London this month, after a run on Broadway last year, takes the theme of abundance to heart, filling the theater with lanterns, bells, snow and food — watch out for the parachuting brussels sprouts! Nor does Jack Thorne’s script, directed by Matthew Warchus, stint on the eerie elements, which makes Andrew Lincoln, after eight years as Rick Grimes on “The Walking Dead,” a wonderfully apt choice for Scrooge. (Dec. 12-24, from about $27; oldvictheatre.com.)
JESSE GREEN

‘The Nightmare Before Christmas’

“Life’s no fun without a good scare,” the ghoulish citizens of Halloween Town sing at the top of Tim Burton and Henry Selick’s “The Nightmare Before Christmas.” How right they are, for sugar is better with a healthy amount of spice. In this stop-motion classic from 1993, the skeletal dandy Jack Skellingon tries to make Halloween Town embrace Christmas cheer, with delightfully misguided results. The aesthetic universe is so rich that every viewing unearths new details, and Danny Elfman’s inspired score lands somewhere between Goth vaudeville and Gilbert and Sullivan. (Disney+.)
ELISABETH VINCENTELLI

You can’t get much more ecumenical — or cheerfully irreverent — than this production from the Czechoslovak-American Marionette Theater. Expect to encounter caroling in Swahili, Fezziwig singing “The Dreidel Song” and marionettes representing the Rockettes high-kicking in Eastern European costumes. Vit Horejs, the troupe’s founder, does it all with a cast of some three dozen wooden puppets, some of them antique. (Livestream Dec. 19-Jan. 3; czechmarionettes.org
LAUREL GRAEBER

Three years ago, the convention-busting, extravagantly costumed writer-performer Taylor Mac premiered a concert that rejuvenated the holiday-special genre with a punkish cabaret sensibility. Now retooled for the virtual era, the show is a perfect pick-me-up for those with an intolerance to the season’s usual high-fructose content (but perhaps not for their young children). Mac will host the live event, introducing segments he recently recorded at the Park Avenue Armory with a socially distant band, as well as contributions from various guests and a new animated video. (Livestream on Dec. 12 at 2, 7 and 10 p.m.; on demand through Jan. 2; taylormacholidaysauce.com.)
ELISABETH VINCENTELLI

This is the gold standard “Nutcracker,” performed by New York City Ballet every year since George Balanchine premiered his version in 1954. The detailed party scene, the tree that grows gigantic, the waltzing snowflakes, the children and adults bringing out all the fantasy in Tchaikovsky’s music: this year, streaming is the only way to see all that. The recording, filmed last year but never before broadcast, features Megan Fairchild as Dewdrop and Maria Kowroski as the Sugar Plum Fairy. (Available on demand Dec. 11-Jan. 3, $25; marquee.tv.)
BRIAN SEIBERT

The encompassing warmth of Jessye Norman’s voice made it ideal for Christmas music, to which she brought nobility but also tenderness. There are a few of her holiday concerts on YouTube, but try this one, recorded in 1988 at Ely Cathedral, outside Cambridge, England. It’s not a time for rarities, but rather for favorites like “Hark! The Herald Angels Sing,” “O Holy Night” and “Joy to the World,” all done in epic style, as well as “This Christmastide,” written for Norman and tailored perfectly to her rich, capacious soprano. (YouTube.)
ZACHARY WOOLFE

Released in 1944, Vincente Minnelli’s wonderful musical follows the Smith family over nearly a year. The holiday part is relatively short, but Judy Garland’s achingly tender rendition of “Have Yourself a Merry Little Christmas” is the film’s emotional high point. The scene grounds Minnelli’s portrayal of family, home and roots; while this may sound like fusty conservatism, “Meet Me in St. Louis,” resplendent in velvety Technicolor, is a beautiful humane work about belonging. (Rent or buy on all major platforms.)
ELISABETH VINCENTELLI

Families can journey into the past virtually with this free series from the New-York Historical Society. In Let’s Learn About Hanukkah, on Dec. 2, children will visit a celebration circa 1916 in which a Tenement Museum historical interpreter portrays a Sephardic Jewish teenager. Let’s Bake for Christmas, on Dec. 9, which focuses on 18th-century America, will include creating an almond cake from scratch. And young historians can delve into African-American tradition during Let’s Celebrate Kwanzaa, on Dec. 16, which will explore the holiday’s seven principles. (All programs stream at 1 p.m. on Zoom; nyhistory.org.)
LAUREL GRAEBER

This “Nutcracker” uses Tchaikovsky’s score, remixed in spots, but transfers the story to a diverse and contemporary New York with clever hip-hop choreography by Jennifer Weber. A young woman finds love with a guy who sells nuts, and through a little time travel, they rekindle the dance-sparked romance of her bickering parents. In characterization and humor, the show recalls family sitcoms of the 1980s, and a guest appearance by Kurtis Blow adds to the old-school nostalgia. (Available for livestream and on demand Dec. 26-Jan. 3, $25; stellartickets.com.)
BRIAN SEIBERT

This blockbuster came out in the summer of 1988, but it takes place on Christmas Eve, and that’s enough to have turned a popular action movie into a Yule staple. There are few better ways to spend a holiday afternoon than sprawled on the couch, watching Bruce Willis at the peak of his nonchalant resourcefulness sneak around a high-rise and battle a gang of ruthless thieves led by the unctuous Alan Rickman. Willis’s gritty cop gets repeatedly knocked down, but he gets up again, dispatches one bad guy after another, and wins back his estranged wife — how is that not Christmas spirit? (HBO.)
ELISABETH VINCENTELLI