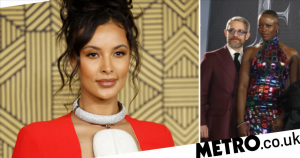 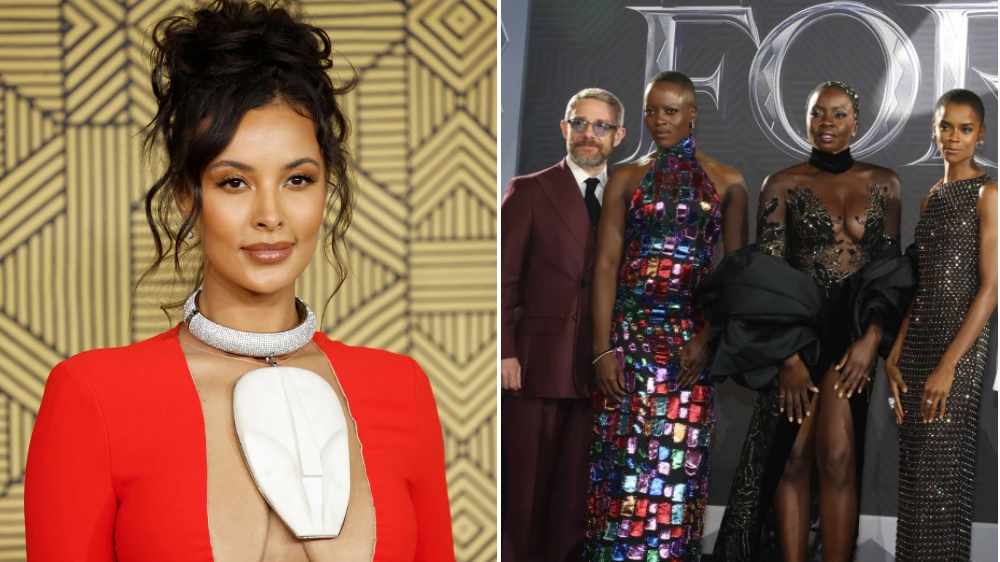 The stars were out in full force at the Black Panther: Wakanda Forever European premiere in London on Thursday night – and by that, we mean the ladies were leading with the most fashion-forward looks.

Cut-out features, sparkle, satin gowns and statement necklaces, we had the lot on the black carpet at Cineworld Leicester Square, ready to celebrate the arrival of Marvel’s latest blockbuster.

We should also give Martin Freeman, who plays Everett K. Ross in the film, a shout-out for being reliably suave in a vintage cut double-breasted suit, this time in a rich plumb hue. Top marks to Martin.

Wearing a figure-hugging red and white graphic-print dress with an illusion navel-grazing neckline, the radio presenter ensured all eyes were on her thanks to her chunky silver choker necklace complete with a massive white pendant covering the centre of her chest.

The female stars of the film were also dressed to impress, with Letitia Wright in smoky silver column dress, complete with mirrored embellishments.

Letting the dress do most of the talking, she paired it with chunky diamond rings and hoop earrings.

Michaela Coel, who stars as Aneka in the upcoming sequel, was a vision in black lace as she donned a black bodysuit complete with lace sarong, tights and heels.

Oscar-winning cast member Lupita Nyong’o let her headwear do all the talking with a fetching head accessory matched with a high-neck ruffled silver and black gown.

Also bringing their neon A game was Stormzy looking dapper in a bright pink suit, a far cry from the rapper’s more usual understated all-black outfits.

Other guests providing glamour included Little Mix star Leigh-Anne Pinnock in a black and cream striped corseted gown, and red carpet host Clara Amfo glittering in a gold dress held together with strips across her torso.

Pundit Alex Scott looked sharp in a mirrored corset and black trousers while Alexandra Burke was a vision in red satin.

Reflecting on the film’s release following the death of original star Chadwick Boseman, who died from colon cancer following his performance as King T’Challa in the first film, Michaela said she wanted to ‘support and comfort’ her Black Panther castmates.

‘I think there was so much going on with Chadwick… I was just keen to support them and comfort them and be a friend during a very complex time,’ she told the PA news agency.

The I Will Destroy You actress and creator also shared her personal motivation behind taking on the role of a queer character in the movie, saying: ‘For me it was about why I took the role and what it meant to me to portray a queer character, being from Ghana, where there’s a lot of confusing LGBT laws going on.

‘So for me, my focus on that element was very singular… It was about what I represent in Ghana and putting my feet in the shoes of a queer character.’

Martin Freeman also commented on the effect Boseman’s legacy had on the creation of Wakanda Forever, telling PA: ‘Not only in this job but in life, if you don’t channel your grief into something else then we all just sit around and die.

‘You can’t do that. The only alternative is to go on.

‘And the shock and grief of Chadwick’s passing has to be turned into something positive, otherwise what are we doing? So I hope he’ll be happy with what we’ve done.’

Winston Duke remembered his late co-star while on the red carpet in London’s Leicester Square, where he described the process of filming without Boseman as ‘melancholic’.

‘There was a deep need to see him and experience him again, but with the knowledge that you’re not going to have that,’ the 35-year-old said.

‘It’s something that I think we’re all still dealing with and just being able to have this tribute is very special for all of us.’

He added: ‘The entire thing was trying to channel grief to make something positive.’

Black Panther: Wakanda Forever is due for release on November 11.