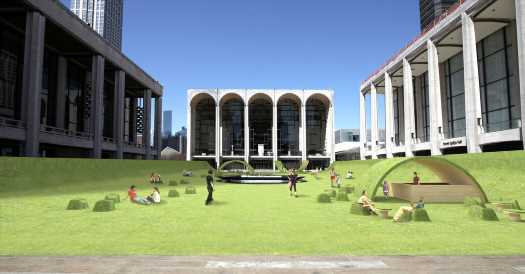 Lincoln Center, which is holding a series of performances outdoors while its theaters remain closed by the pandemic, announced Tuesday that it would transform the plaza around its fountain into a parklike environment by blanketing it with a synthetic lawn.

With the center using its outdoor spaces as stages this spring and summer, it turned to a set designer, Mimi Lien, to reimagine its campus. She came up with a plan to transform the plaza into something she calls “The GREEN” — adding a splash of color to a palette that is dominated by white travertine, and turning the space into a grassy-looking oasis that she hopes will invite New Yorkers in for performances and relaxation.

“I wanted to make a place where you could lie on a grassy slope and read a book all afternoon,” Lien, the recipient of a MacArthur genius grant, said in a statement. “Get a coffee and sit in the sun. Bring your babies and frolic in the grass. Have a picnic lunch with co-workers.”

The installation, which will open on May 10 and remain in place through September, will be the physical centerpiece of Restart Stages, an initiative Lincoln Center announced in February to use its outdoor spaces for live performances. The initiative began last week with a performance the New York Philharmonic gave for health care workers, and it has continued since then with a blood drive and other pop-up arts programming.

The artificial turf will be green in another sense: Officials said it that it would be made of recyclable material with “a high soy content, fully sourced from U.S. farmers.” It will also feature a small snack bar, and have books available for borrowing. Events that will be held in the space will be announced in the coming weeks, officials said.

The space will be open from 9 a.m. to midnight; face coverings, social distancing and other health and safety protocols will be required. The plaza will be cleaned regularly, officials said.