“I can’t imagine having dinner with someone so disgusting,” Stephen Colbert said. “And you have no idea which of those three guys I’m talking about.” 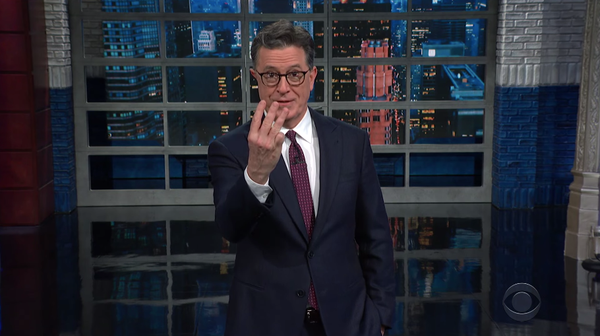 “I can’t imagine having dinner with someone so disgusting,” Stephen Colbert said on Monday. “And you have no idea which of those three guys I’m talking about.”

“You know it’s a bad sign when Kanye West is only the third most controversial person at your dinner table.” — JIMMY KIMMEL

“Now, just in case ‘Holocaust denier’ doesn’t get the point across, Fuentes is not a good guy. He has spread antisemitic conspiracies, he is considered a white supremacist by the Anti-Defamation League, attended the Unite the Right in Charlottesville in 2017 and the Stop the Steal rally on Jan. 6. That is the alt-right EGOT, as in, EGOT zero hugs as a child.” — STEPHEN COLBERT

“When news got out about this Nick Fuentes guy and the ex-president started getting a lot of criticism, he put out a statement saying, ‘Our dinner meeting was intended to be Kanye and me only, but he arrived with a guest whom I had never met and knew nothing about.’ OK, not sure ‘I was only scheduled to have dinner with one famous antisemite’ is the defense he thinks it is.” — STEPHEN COLBERT

“Just to recap, Kanye West went to Mar-a-Lago to have dinner with Donald Trump, which sounds like the beginning of a joke. And as his plus one, he brought a well-known white supremacist/Holocaust denier, and Trump claims he didn’t know about that. And if he didn’t know, which is worse: Having the guy over for dinner or having no idea you’re letting a racist random into a house that was, until very recently, full of unguarded top secret documents?” — JIMMY KIMMEL

“This dinner was a multicourse tasting menu of crazy, but we don’t know exactly what happened, because it’s become a real ‘he said, Ye said.’” — STEPHEN COLBERT

“For instance, Kanye plans to run for president again, and after the meal, he claimed, ‘I think the thing that the ex-president was most perturbed about, me asking him to be my vice president.’ What?” — STEPHEN COLBERT

“This will make him nuts. We even made a bumper sticker that I think he’ll like. It says ‘YeTrump.’ Someone print these up.” — JIMMY KIMMEL

“He has no problem hosting a guy who wants to go ‘Defcon 3 on the Jews’ or the Holocaust denier that he brought to dinner with him, who he got along with. But if you ever suggest he should be Number Two on someone’s ticket, Trump would be like, ‘You disgust me, sir.’” — TREVOR NOAH

The “Emancipation” star Will Smith told Trevor Noah how he’s been spending his time since the infamous Oscars incident.

What We’re Excited About on Tuesday Night

Anderson Cooper’s new podcast “All There Is” digs into his own family traumas, as well as those of others.