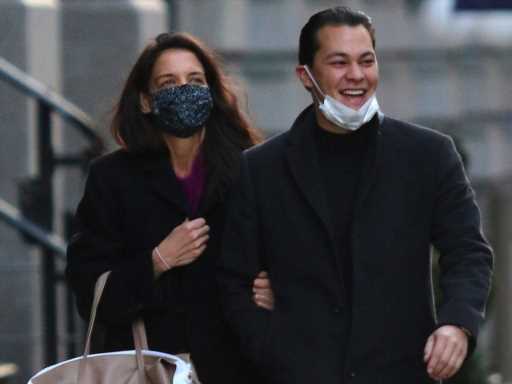 Katie Holmes’ boyfriend Emilio Vitolo Jr. has passed a major life test when it comes to a relationship — her friends approve! This isn’t an easy task under normal circumstances, but when you add a pandemic into the mix, it’s an even bigger challenge.

The actress recently found the perfect time to make an introduction in a socially distant setting, and her friends are reportedly “obsessed with him,” according to a source who spoke to Entertainment Tonight. Her gal pals met him at an outdoor dinner organized by Holmes in the Upper East Side neighborhood of New York City. Apparently, he not only got the thumbs up, but he actually raced to the head of the boyfriend class. It’s a pretty big statement for her friends to be calling him “the most charismatic man she’s ever been with,” especially when Holmes has dated high-profile men like Jamie Foxx and Chris Klein, and was married to Tom Cruise.

Her BFFs are saying there’s something special about the 33-year-old chef, besides being humorous and easy to get along with. They have Holmes’ back after her last few disappointing relationships. “Best of all, he is so attentive and affectionate towards Katie,” says the source.

It’s no secret the couple is smitten with each other as they have been making out all over the city for almost a year now. Vitolo recently made things Instagram official on Holmes’ birthday by sharing a black-and-white photo of her sitting in his lap. “The most amazing ,kindest, beautiful person ❤️. Every time I see your face it makes me smile . Happy Birthday !!! I love you !!” he wrote.

The pandemic became the perfect opportunity for the couple to get to know each other since the entertainment industry slowed down and his restaurant business wasn’t as busy. “Instead of a few dates over an extended period of time, they were able to have a month’s worth of dates in a matter of days,” a second source told ET in November.

With the friends checked off the approval list, the only thing left would be Holmes’ parents and daughter Suri, 14, — if it hasn’t happened already. From the looks of their PDA all over Manhattan, the duo is in for the long haul.

Before you go, click here to see celebrity couples with significant age differences.