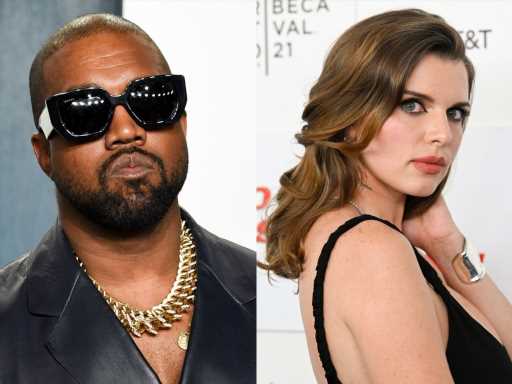 Well, it’s official: Kanye West and Julia Fox are dating. After the two were initially spotted together in Miami, the Donda rapper and Uncut Gems actress took their romance to New York City, where they caught a Broadway play and then went out to dinner. Apparently, though, there was another element to their second date we didn’t know about until now. West staged a PDA photoshoot with Fox and bought her an entire hotel suite full of clothes, as Fox described for Interview Magazine.

Fox shared with Interview Magazine that she and West had an “instant connection” during their first get-together in Miami. Since the two were clearly vibing, they decided “to keep the energy going and fly back to New York City,” where the two saw Slave Play and went to dinner at Carbone — one of Fox’s “favorite restaurants. Obviously.” According to Fox, the evening just kept getting better from there.

“At the restaurant, Ye directed an entire photo shoot for me while people dined! The whole restaurant loved it and cheered us on while it was happening,” Fox shared. You can see the photos by Keving Leyva HERE. What happened next Fox described as “a real Cinderella moment.” West managed, somehow, to get an entire hotel room full of clothes just for Fox — not unlike  similar gestures he used to make for estranged wife Kim Kardashian.

Having gone on only two dates thus far, this feels pretty extreme. As Fox observed: “Like, who does things like this on a second date? Or any date!” But with the amount of attention Kardashian’s relationship with Saturday Night Live star Pete Davidson has received, we guess it was only a matter of time before West and his new love interest made some serious headlines. As for where Fox and West’s relationship is headed next? “Everything with us has been so organic,” Fox said of her connection with the Grammy-winning rapper. “I don’t know where things are headed but if this is any indication of the future I’m loving the ride.”