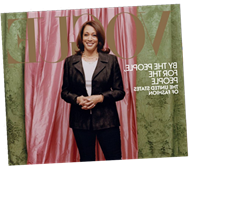 She appears on two separate covers for the magazine’s February issue, with the words “Madam Vice President!” splashed across both. Tyler Mitchell, who also famously photographed Beyoncé and Zendaya for the magazine, took both pictures.

On one cover, Harris wears a casual black suit and her now-trademark Converse sneakers. Flanked by the phrase “By the People, For the People: The United States of Fashion,” she stands with her hands clasped, in front of a backdrop of fabrics inspired by the colors of her Howard university sorority, Alpha Kappa Alpha.

Before the magazine officially released the covers on Sunday morning, a low-resolution image of the pink-and-green cover was met with some less-than-stellar reviews on social media.

Many critics believed the lighting did a disservice to Harris by washing out her skin tone — much like Vogue’s poorly received cover featuring Olympian Simone Biles, which drew significant ire last year.

Others took issue with the art direction and casual styling of the first cover, given the historic nature of Harris’ position as the first Black, Asian American vice president.

Frustrated readers also blasted Vogue Editor-in-Chief Anna Wintour, who has been widely criticized for the lack of Black representation in the magazine’s pages throughout her over-30-year tenure. She apologized for mistakes last year.

“I know Vogue has not found enough ways to elevate or give space to Black editors, writers, photographers, designers, and other creators,” Wintour wrote in a letter to her staff. “We have made mistakes too, publishing images or stories that have been hurtful or intolerant. I want to take full responsibility for those mistakes.”

“Anna Wintour needs to go. If the only time her team can properly style black women is when she’s covered in couture then her tenure has ran its course,” one Twitter user wrote.

“Wait that Kamala Vogue cover is real?!” another asked. “I thought it was fake—that’s how bad it is. Did they just ask her to send them photos her husband took or”

“Kamala Harris is about as light skinned as women of color come and Vogue still fucked up her lighting,” a third person added. “WTF is this washed out mess of a cover?”

Others continued to express their disappointment online.

In the accompanying story, Harris reflected on the significance of her address to the nation in November, after she and President-elect Joe Biden were declared the winners of the election.

“It was very important for me to speak to the moment, and the moment includes understanding that there is a great responsibility that comes with being a first,” she said. “I always say this: I may be the first to do many things — make sure I’m not the last. I was thinking of my baby nieces, who will only know one world where a woman is vice president of the United States, a woman of color, a Black woman, a woman with parents who were born outside of the United States.”