“In each project I am asking the same questions — about becoming and identity and how we find ourselves,” said Jona Frank, a Los Angeles-based photographer who has made a series of portraits of subcultures in American high schools, a British boxing club and a Christian college in Virginia.

Her new memoir, “Cherry Hill: A Childhood Reimagined,” part autobiographical text and part cinematic recreation of her upbringing in Cherry Hill, N.J., might appear to be a departure.

The photographs are staged with actors. The written narrative is as important as the images. And instead of exploring unfamiliar subcultures, she is excavating territory much closer to home: her own childhood. However, to Ms. Frank, “Cherry Hill” is a continuation of her artistic project, even if the starting point is different. “What I did was flip it on its side and say it was about me,” she explains. “But in another sense, all of my photographs are about me. Now I am revealing how all these other pictures fit into my story.”

Or, as Oscar Wilde wrote, “Every portrait that is painted with feeling is a portrait of the artist, not of the sitter.” 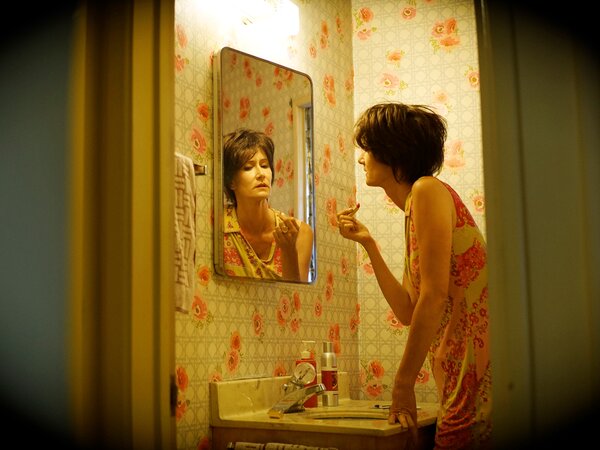 The idea that led to “Cherry Hill” germinated in 2015. Coming to the end of her sojourn in the English town of Ellesmere Port, where she chronicled the exploits of small boys and young men who were training to box, Ms. Frank found herself thinking, despite the Liverpudlian accents, of her childhood in a New Jersey suburb of Philadelphia. The ubiquitous sound in the air of music from the 1980s amplified that feeling.

The aspiring boxers’ devotion to old-fashioned concepts of manliness, which she portrayed in the book “The Modern Kids,” reminded Ms. Frank of how her suburban mother endorsed with religious intensity a 1950s stereotype of femininity. Once she was back home in Santa Monica, Ms. Frank started writing stories about her early years, centered on the older woman’s devotion to standards that her only daughter, guilt-stricken but resolute, rejected in favor of constructing a life from the inside out.

“Cherry Hill” is a portrait of the artist as a young woman, coping with a mother’s struggles with depression and an older brother’s descent into schizophrenia. In high school, Ms. Frank discovered photography. “I often walked around and saw images,” she says. “I thought everybody did. When I found a way to make them tangible, that was a relief.”

Her passion for photography led her to study at the University of California on a scholarship. Uncertain of her path, she went home to Cherry Hill after graduation. But in 1990 she returned to Los Angeles, where she too became a wife and mother. Unlike her mother, however, she pursued her personal dreams, not others’ expectations.

The uncomfortable fit between societal norms and individual desires is a venerable photographic topic, explored most ambitiously by August Sander’s lifelong project, “People of the 20th Century,” in German portraits that subtly reveal the Procrustean process of social conformity. Each picture encapsulates a life, and collectively they depict a culture.

Ms. Frank, on the other hand, wrote about the experience of one family, complemented by staged pictures. The key casting choice was the woman to impersonate her mother. For that role, she recruited the actress Laura Dern, a friend. “We met years ago through our kids in school,” she says. “She doesn’t look anything like my mother. She’s tall. She’s blond. And then I saw her in a movie, ‘99 Homes.’ She’s falling in on herself and deeply unhappy. And I thought, ‘She could play my mother.’” Ms. Dern embraced the unorthodox enterprise.

They took a few photographs in 2016. “She’s incredibly smart and intuitive about where the camera should be and how to relate to the camera,” Ms. Frank recounts. “She said, ‘I’m going to go through all the actions but slow them down, and then hold the action so you could photograph.’ That helped set up the way I did the book.” Three actors stand in for Jona at different ages.

In a typical memoir, photographs are included to document the people and places that are discussed in the text. André Breton first subverted this convention in his Surrealist romance, “Nadja,” published in 1928, where the mysterious and unstable title character with whom he is obsessed never appears in a photo. Instead, the Parisian sites he visits, the writer friends he consults and the works of art he contemplates are reproduced in unremarkable pictures — a device that underscores both Nadja’s elusiveness and the uncanny strangeness of the banal and quotidian. More recently, W.G. Sebald also incorporated indistinct, boring photographs in his memoirs to achieve a similar effect.

But unlike those writers, Ms. Frank, 54, is primarily a photographer. In “Cherry Hill,” her own pictures constitute a fully equal component of the memoir, as artfully composed as the accompanying text. The images also convey the strain of maintaining an image. Ms. Dern is playing her mother, but her mother, too, was playing a role. By juxtaposing her recollections of an incident from her childhood with a photograph that shows how, in the innumerable “Kodak moment” snapshots of those years, such episodes were memorialized, Ms. Frank visually presents the theme of the narrative: the unrelenting striving for respectability that stifled both mother and daughter.

“In the suburbs, you had to present yourself, but the underside wasn’t as clean and shiny as the presentation,” Ms. Frank says. In her book, she recreated non-Kodak moments, the kind that were hidden rather than commemorated, such as scenes of her mother alone in quiet despair. While Ms. Frank escaped suburbia, her mother stayed. “She was not a person who believed she could have options,” Ms. Frank explains.

Aside from those private pictures that would not have been made, the photographer also endeavored to create pictures that she could not have made — images that represent her interior state as a child. As a means of conveying how trapped she felt, Ms. Frank photographed her young alter ego in a replica of her bedroom, standing at the window with her eyes closed and arms extended as the sunlight warms her face. The first time she saw the picture, she burst into tears. “The bedroom was incredibly accurate as to my childhood bedroom, but of course as a child I never saw myself do that,” she says.

Most of the family home in Cherry Hill — which Ms. Frank reproduced in a house near her Santa Monica residence that its owner lent her before its restoration — was wallpapered. In another photograph, the girl actor wears a shift made of the same toile de Jouy that covers the walls. Wearing a smile and a bouffant hairdo, the child in the photograph is the anti-Jona that Ms. Frank believes her mother wanted her to be, content to conform to her surroundings. (A witty, custom toile pattern, with cameras, boxers, crucifixes, clotheslines and other motifs from Ms. Frank’s life story, adorns the cover of the handsome book.)

Ambiguous by nature, photographs flutter indeterminately until pinned down with a caption. Drawing, by contrast, can be more definitive, especially when it incorporates a text. Ever since Art Spiegelman told his father’s Holocaust story in comic strip format in the groundbreaking “Maus,” which won a Pulitzer Prize in 1992, the graphic novel, combining word and image in a typical frame, has been a favored format for memoirists. Marjane Satrapi’s “Persepolis” and Alison Bechdel’s “Fun Home” are two impressive graphic novels by women who, like Ms. Frank, are recalling their younger selves.

A graphic novel possesses a directness that a photographer might envy. “Alison Bechdel’s books were guides to me for how you can tell a story in words and images,” Ms. Frank says. “I felt jealous of her ability to be able in the back of a frame to put an arrow and a Halloween mask, and it says, ‘Just left over from Halloween.’” A graphic novelist can call attention to such details that, without propelling the narrative, nonetheless enrich the story. “I can put something like that in a photograph and hope people notice, but I can’t put a little arrow,” Ms. Frank observes.

However, what a photograph-based memoir can do and a graphic novel cannot is conjure the aura of the movies, the magical domain of the silver screen where reality takes on the mystique of myth. In a new memoir, “Santa Barbara,” Diana Markosian’s fascinating restaging of her vexed relationship with her own mother, the photographer similarly employs actors. She also inserts screen shots of the television soap opera, “Santa Barbara,” that she watched in the former Soviet Union before her mother brought the family to Santa Barbara, Calif., to live with an American husband. At times, the family story in the real Santa Barbara outdoes the soap opera for melodrama.

Ms. Frank was searching for something that felt like a Hollywood romance from the fifties, not a daytime soap. Casting a movie star to play her mother fostered that illusion. But Ms. Frank says she wanted to go further, “to create images between reality and cinematic fantasy.” Her husband, Patrick Loungway, a cinematographer, suggested that she use an anamorphic lens to replicate the look of a CinemaScope film. The wide lens, in conjunction with theatrical lighting that varies from golden glow to incandescent glare, provides the sense of Hollywood transport and reverie she sought.

“Cherry Hill” resembles a dream, because like any artist, the young Jona was a dreamer. That gave her the power to escape the confines of Cherry Hill and suburban womanhood that her mother never left behind.