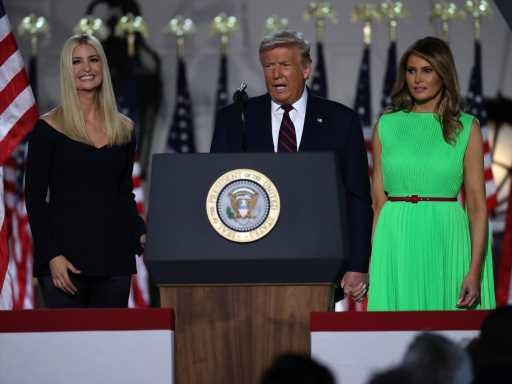 Donald Trump has been boldly hinting at a 2024 presidential run for quite some time now, but there are reportedly a few family members who are not too keen on his White House ambitions the second time around. It seems that daughter Ivanka Trump and wife Melania Trump are on the same page about this, which is a rare feat given their notoriously chilly relationship.

Calling it “a family divided,” a source told OK! magazine that the recent FBI search-warrant raid of their Mar-a-Lago home is giving Melania cold feet about stepping back into the political arena. She’s reportedly hoping that if they stay away from Washington, D.C., then it will “make the family’s legal problems go away.” Ivanka apparently agrees with her stepmother’s assessment of the situation and “both are begging him to announce he will not be running.”

It’s not just the legal problems that has the controversial family running “scared,” it’s the fact that Melania and Ivanka both miss being the toast of the town. They had it pretty easy in New York City before Donald Trump waded into the swamp “Melania and Ivanka are sick of the endless investigations and attention,” the insider added, “They want to go back to their fabulous lives. They just want this all to end.” This theory makes a lot of sense when it’s clear that Ivanka and Jared Kushner have spent almost two years trying to separate themselves from Donald Trump’s reputation and make their way back into high society.

The legal investigations aren’t going to end anytime soon with evidence of toilet-flushed documents and the New York City Attorney General continuing to be a thorn in the Trump Organization’s side. Donald Trump doesn’t like to be told what to do — and if Melania and Ivanka can’t get through to him, it’s unlikely anyone else will.

Before you go, click here to see photos of Donald Trump’s family over the years.