A working actor since joining “Game of Thrones” at 11, Ramsey takes her biggest role yet in this dystopian zombie thriller.

Bella Ramsey stars in “The Last of Us,” based on the video game, as a girl who could be the key to humanity’s survival.Credit…Charlotte Hadden for The New York Times

LONDON — After news came out about Bella Ramsey’s casting as one of the main characters in HBO’s new zombie thriller, “The Last of Us,” the actor went online to see how it was going over. It was a rough education.

“It’s the first time I’ve ever had a negative reaction to something,” said Ramsey, who was 17 at the time.

It became a kind of addiction. She returned again and again to the commentary about her appearance and perceived limitations, focusing primarily on the nasty remarks because she “didn’t believe” the positive ones, she said.

“There would be times I’d find it funny,” Ramsey, now 19, recalled over lunch at a restaurant here last month. “Then I’d get to the end of a 10-minute scrolling session, put my phone down and realize: Maybe that was a bad idea.”

It was a quick, merciless introduction to the new level and nature of the exposure that will come from “The Last of Us,” about a fictional America decimated by a deadly fungal contagion and a girl, played by Ramsey, who is touted as the potential cure. Premiering Sunday on HBO, it comes with high expectations from a fervent audience, thanks to its source material: The 2013 video game it is based on has sold over 20 million copies, earned widespread critical acclaim and spawned a sequel. (Both games have also been plagued by a vocal minority of toxic fans bemoaning the inclusion of L.G.B.T.Q. characters and other elements.)

Ramsey has been a working actor since she was 11, when she signed on to “Game of Thrones” and made a memorable professional debut as the headstrong house leader Lyanna Mormont. After “Thrones” came several British children’s series; the BBC/HBO adaptation of “His Dark Materials”; and, most recently, an acclaimed starring role in Lena Dunham’s 2022 coming-of-age period comedy, “Catherine Called Birdy.”

“The Last of Us,” however, brings Ramsey’s biggest role to date. She plays Ellie, the teenage girl who, being immune to the disease that has wiped out much of the earth’s population, is possibly the key to humanity’s survival. Whether and how she might become so is the focus of much of the first season, with Ellie hitting the road and dodging fungal zombies with an increasingly paternal smuggler named Joel, played by Pedro Pascal (“The Mandalorian”). 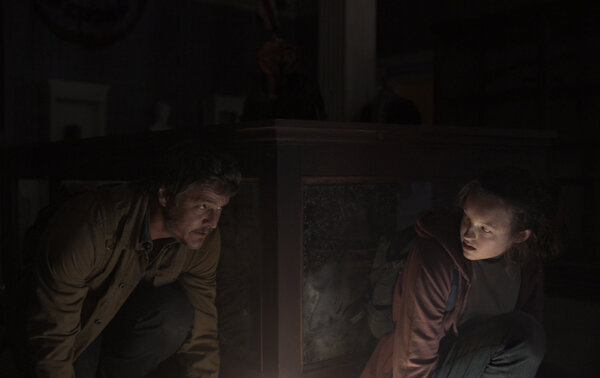 While “Game of Thrones” had given Ramsey experience working on a show of extravagant scale, “The Last of Us” is the first time she has played a lead role in one. But Neil Druckmann and Craig Mazin, the creators of the show, said that from the beginning, they knew Ramsey was right for the job.

Inside the Dystopian World of The Last of Us

The critically acclaimed post-apocalyptic video game won over players with its photorealistic animation and a morally complex story.

“We were looking for a specific combination of contradictions: Someone that can be funny and quirky, and violent and rough,” Druckmann, who also led development of the game, said in a phone interview. When he saw Ramsey’s audition tape, he said, “I didn’t see Bella acting like Ellie — I saw Ellie.”

Once filming started, Mazin (“Chernobyl”) was impressed by Ramsey’s ability to challenge herself on set. “She would push through occasional bouts of self-doubt, anxiety or panic and rise above it,” he wrote in an email. “There are few people better between the words ‘action’ and ‘cut.’”

For Ramsey, however, confidence in her abilities can still be elusive.

“It’s only recently that I’ve accepted I am Ellie, and I can do it, and I am a good actor,” she said. “But this will last for a few weeks and then I’ll think I’m terrible again. That’s just the process.”

In person, Ramsey evinces little of this or any other flavor of insecurity. She is sharp and good-humored, joking about spending her last day as a 17-year-old shooting a gruesome scene in which Ellie stabs an infected person. (“It was wonderful.”) She enjoyed being on set so much, she said, she was sad that her 18th birthday fell on a day off.

Born in Nottingham, England, Ramsey grew up in the nearby county of Leicestershire. She was 3 when she followed her sister into an amateur theater group, and she never looked back, spending much of her childhood in after-school drama clubs. At 10, she joined the Television Workshop in Nottingham, which counts the actors Samantha Morton and Jack O’Connell among its alumni. Iain Smith, a former workshop director, remembered Ramsey’s standout performance in a production the school staged, playing a teacher who turns into a cow.

“She was stratospheric in terms of her commitment to it,” he said in a phone interview. “It was uncanny.”

Ramsey’s efforts at the workshop led to the audition for “Game of Thrones.” Her Lyanna Mormont, who joined the show in Season 6, became an instant fan favorite, with a grit and intensity that belied the character’s (and the actor’s) tender age.

This commitment is a quality Ramsey still possesses, according to Joe Alwyn, who starred alongside her in the medieval period comedy “Catherine Called Birdy.” In an email, Alwyn wrote that Ramsey, who played the headstrong title character, was “full of a childlike energy and a willingness to jump in and play, whilst also carrying a maturity and awareness way beyond her years.”

Last month, “Catherine Called Birdy” earned Ramsey a Critics Choice Award nomination for best young actor/actress. (The awards will be handed out on Sunday night.) The non-gender-specific category was pleasing for a person who has long reckoned with gender identity — as a child, Ramsey loved being mistaken for a boy by strangers, she said.

“I guess my gender has always been very fluid,” she said. “Someone would call me ‘she’ or ‘her’ and I wouldn’t think about it, but I knew that if someone called me ‘he’ it was a bit exciting.”

Now, if she sees “nonbinary” as an option on a form, she will tick it. “I’m very much just a person,” she said. “Being gendered isn’t something that I particularly like, but in terms of pronouns, I really couldn’t care less.”

Ramsey has used her art to help her process other aspects of her life. She returned recently to a film script she began when she was 14, a project inspired partly by her own experience with anorexia nervosa. (In 2018, Ramsey posted on social media about her diagnosis and the part religion played in her recovery, though her relationship with faith is “a lot quieter” today, she said.) The script, which has “developed and matured” over the past five years, she said, is about a teenage girl living with an eating disorder and the “imperfect relationships and complicated people” she surrounds herself with.

Ramsey asked some past collaborators to read an early draft, and one person who did was the Oscar-nominated actor and filmmaker Jesse Eisenberg, a co-star in the 2020 war drama “Resistance.” In a phone interview, Eisenberg said the script was “insightful and written with great emotional depth.” What strikes him about Ramsey, he said, is that she exhibits “her generation’s thoughtfulness, but on the other hand she seems to have this amazing self awareness too.”

“Bella is like a Rosetta stone for young people,” he added.

Ramsey has never been much of a gamer, but she was aware of “The Last of Us” when her agent emailed an audition script and Ellie’s character description. She was immediately drawn to the role, she said, and felt attached to Ellie “for reasons I couldn’t describe.”

After Ramsey won the part, Druckmann and Mazin advised her not to play the game in order to prepare. Instead, the actor watched YouTube clips of significant gameplay scenes, she said, in order “to feel confident that the Ellie I felt inside of me, under my skin, was the right one.”

Ramsey didn’t meet Pascal in person until preproduction began in Calgary, Canada, in July 2021, on the same day she had to cut off over 15 inches of her hair for the role. (She still has it stored in a bag.)

The characters’ centrality to the story led to a closeness between the actors, Pascal noted. “For the year we were shooting in Alberta, it was primarily the two of us, with other actors and directors coming and going,” he wrote in an email. “We clung to each other for dear life.”

During the nearly yearlong shoot, Ramsey lived within a “bubble” almost totally removed from the outside world, owing to her demanding shooting schedule and to strict Covid protocols that made it difficult to explore Calgary in her downtime. As a result, maintaining an emotional separation between herself and her character was more difficult than usual, she said.

“People always ask, at the end of a shoot day, how I get back into being Bella,” she said. “But I didn’t know how to do that with Ellie because we were so intertwined.” Sometimes she woke up talking in Ellie’s American accent.

In the lead up to the release of “The Last of Us,” Ramsey has found life “hectic in ways that I’m not used to,” she said. But it is a welcome change after the break she has taken from filming since the shoot wrapped in June, her longest since she was 11. “I don’t know what relaxing is, and I’ve never been very good at it,” she said.

She has filled the time studying environmental science as part of a university distance-learning course and preparing for her driving test. She plans to eventually leave Leicestershire and move to London.

It is all part of an arc toward independence that the former child actor, now an adult, said she is still getting used to. “There was a time I was so anxious I couldn’t leave the house,” she said. “So now knowing one day I could live by myself is exciting to me.”

Making “The Last of Us” was part of this process, Ramsey said: “I feel like my world has just expanded.”