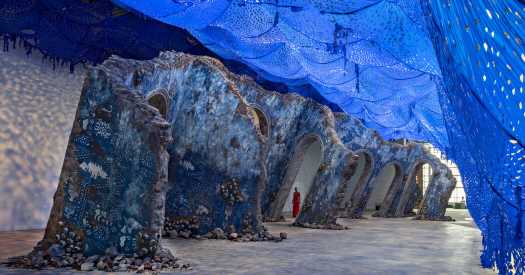 BOSTON — The East Boston shipyard on the harbor hosts a mix of maritime ventures, from vessel repair to a robotics start-up for autonomous navigation. Since 2018, art has found a roost here as well, in the Watershed, the exhibition hall that the Institute of Contemporary Art opened in a former copper and sheet-metal factory.

But on a bright spring day, pausing during the installation of her monumental new sculpture opening July 3, the artist Firelei Báez was contemplating the harbor’s earlier history: The U.S. Immigration Station, where those with bad documents or suspected of having a contagious disease were held until the 1950s. The Boston Tea Party, so celebrated in picture-book history. And less acknowledged, two centuries of ships sailing from here, financed by the Boston elite, to move human chattel and goods around the Atlantic and Caribbean.

“It’s such a palimpsest,” Báez said, looking over the water to the downtown skyline. “Thinking of centuries of development that have happened here — what was negotiated for that to happen, what was given and what was taken?” 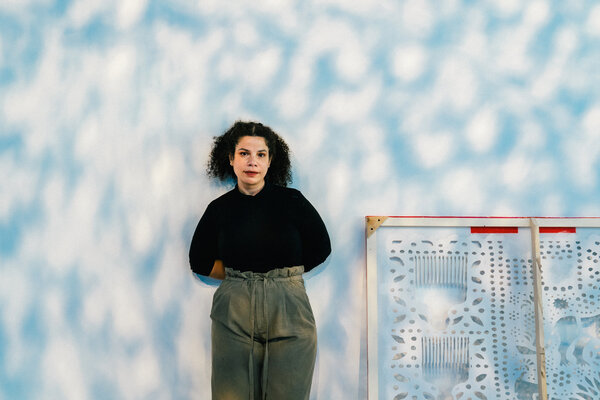 The terms of history — what is told, what is left out, what survives erasure in culture and psyche — are a core concern for Báez, 40, who was born in the Dominican Republic and lives in New York City. Her language for exploring it is at once serious and exuberant.

In many of her paintings, for instance, she reproduces old maps that chart commerce and development from the perspective of the victors, then paints onto them flamboyant tropical colors and fantastical figures — notably ciguapas, forest creatures in Dominican folklore who roam with ambiguous intent.

Her sculptural installations, too, are rooted in history yet unfold as poetry.

At the Watershed, she is working in both modes. A massive mural brings the visitor into a swelling seascape in which a ciguapa decked in wild foliage seems to walk on the waves. Parts of an 18th-century map of the Atlantic seaboard are visible, with Boston Harbor in an inset.

Past the mural rises the sculptural component: an architecture of tilted walls and archways, as if surging indigo-hued from the seafloor, studded with barnacles. A perforated canopy covers the space, like ocean’s surface, or the night sky.

The installation refers to Sans-Souci, a once-majestic palace in Haiti that marks a time of possibility but also sadness in Caribbean history. It was built in 1813 by Henri Christophe, the former slave who became a revolutionary general, then crowned himself king. His reign was turbulent, ending by suicide in 1820; the palace was devastated by an earthquake in 1842.

Haiti, where Báez also has family roots, played a heroic and tragic role in Black and Atlantic history. The first Black republic, it paid dearly for independence, forced to reimburse France the equivalent of tens of billions of dollars for the loss of French sugar and coffee plantations — a burden lifted only in 1947.

Sans-Souci — which means “without a care” — in its brief heyday proposed a different historical pathway, with its elegant gardens, a place of retreat and entertainment for Queen Marie Louise. But it was freighted from the start: Sans-Souci was also the name of a rival Haitian commander whom Henri Christophe killed.

These slippery meanings attract Báez: They suggest the possibility of alternative histories. The ruins recur in her work — a sculpture of a lurching arch, for instance, was shown in 2019-20 on the High Line. Each iteration, she said, is a way to continually reassert the importance of the Caribbean, its resources and people, in world history.

She likened her approach to critical fabulation, the scholar Saidiya Hartman’s term to describe her own method of writing Black histories by imagining beyond the archive.

Báez’s art is connecting. Since receiving her M.F.A. from Hunter College in 2010, she has had a breakout solo at the Pérez Art Museum Miami (PAMM) in 2015, won prestigious awards, and had work acquired by many museums.

She has earned admiration from fellow artists — notably Black and Caribbean women whom she views as predecessors and path-breakers, but who consider her a peer.

“She was a beast from the jump,” said Elia Alba, the Dominican-American photographer and sculptor. “The beauty about her work is that it’s not about categories. She’s presenting gray areas, spaces that express the intersectionality of who we are.”

“She doesn’t seem to make one wrong move in a painting,” said Simone Leigh, another mentor-turned-colleague.

Mid-installation at the Watershed, with the structure in place — made from foam, plywood, and plaster — Báez was perched on a scissor lift, putting in details. She carefully applied symbols and patterns, using stencils, but also rolled on brownish paint in broad gestures to convey some aging and murk.

“I love that she’s not precious,” said Eva Respini, the ICA’s chief curator, looking on. “She’s been working — everyone’s been working — to make it perfect, and here she is slopping on some house paint. That’s the confidence of an artist who is really in control of her language.”

Back on terra firma, Báez offered a kind of glossary. The blue hue, she said, was inspired by adire, the Yoruba technique for indigo textile dyeing. One pattern was drawn from William Morris, the British wallpaper designer, who in turn borrowed from Mughal art. Among smaller motifs were the sun symbol of the Biafra secession, a flower blossom, the black panther, the Afro comb.

She pointed out that symbols traveled and gained new meanings. Indigo, she said, carried multiple associations. “You could literally trade a body for a bolt of cotton dyed in this material,” the artist said. “But before it was of mercantile use and drove industry in the Western world, it was a symbol of status.”

Having both Dominican and Haitian roots, and having spent early childhood in a region close to the border of the two countries, Báez grew up aware of the part that visual culture can play in enforcing social barriers — notably in the colorism that she recalls as being prevalent in the Dominican Republic and stoking anti-Haitian prejudice.

“Dominicans have this slippery language around skin tone,” Báez said. “You’re caramel, cinnamon, all the different foods — but not Black.” After she moved to Florida at age 8 with her mother and siblings, the distance helped her unlearn. “Being away means having the space to say, I don’t want to perpetuate that language or that violence.”

After graduate school, Báez would make daily self-portraits — a brown silhouette with curls, and just the eyes filled in. She titled the series, “Can I pass? Introducing the paper bag to the fan test.” It referred to crude methods that enforced colorism — bias toward light skin and “good hair” — in places like the Dominican Republic or New Orleans.

Eventually, she said, the exercise felt like self-injury. She described the bright, busy colors for which she is now known as a kind of antidote to the grimness of racial hierarchy: “I use color as a way of opening up worlds,” she said.

A recent visit to Báez’s studio in the Bronx found her amid large canvases. Reds, greens, blues were popping. The palette, she said, draws on growing up in the Caribbean and Florida, “with this intense sunlight.”

Also visible were ciguapas. In myth, these creatures have feet that face backward; she shows them that way too, but hers — bulky, distended, wild — differ from the nymph-like forms in popular imagery. The average villager, she said, might not recognize them.

María Elena Ortiz, the curator at PAMM who organized Báez’s 2015 show there, said that the Afro-Caribbean motifs in her work — another is the tignon, a headwrap once imposed on Creole women in Louisiana that became a fashion statement — highlighted power over trauma.

“She’s pointing to resistance and stories of power that have always been present,” Ortiz said. She added: “That’s a very refreshing conversation.”

In working with maps, Báez finds a nerdy joy. She collects old books from which she will pull a page and work straight onto it. She once redrew maps by hand, but now prefers transferring onto canvas enlarged, high-quality scans that reproduce the creases and spotting of the original.

In the studio, she showed one canvas prepped this way with a diagram of world migrant flows in 1858. It was missing some islands, she pointed out — among them Hispaniola, the island shared by the Dominican Republic and Haiti — as if the mapmaker denied their existence.

“This is a work on its own,” she laughed. “It’s ready!” She was hesitant to paint over it — to erase the erasure.

At the Watershed, Báez is incorporating audio — murmured memories on migration and home contributed by people in Boston and elsewhere, and sea sounds. Visitors will hear these as they pass under the arches. “With the smells of the marina, the breeze coming through, I wanted to have the sound to trigger something beyond one narrative,” she said.

Her sunken palace is also a dream portal.

“I think of time itself as being a sense that limits us,” Báez said. She hoped that through her art “we are jostled out of that perception.”