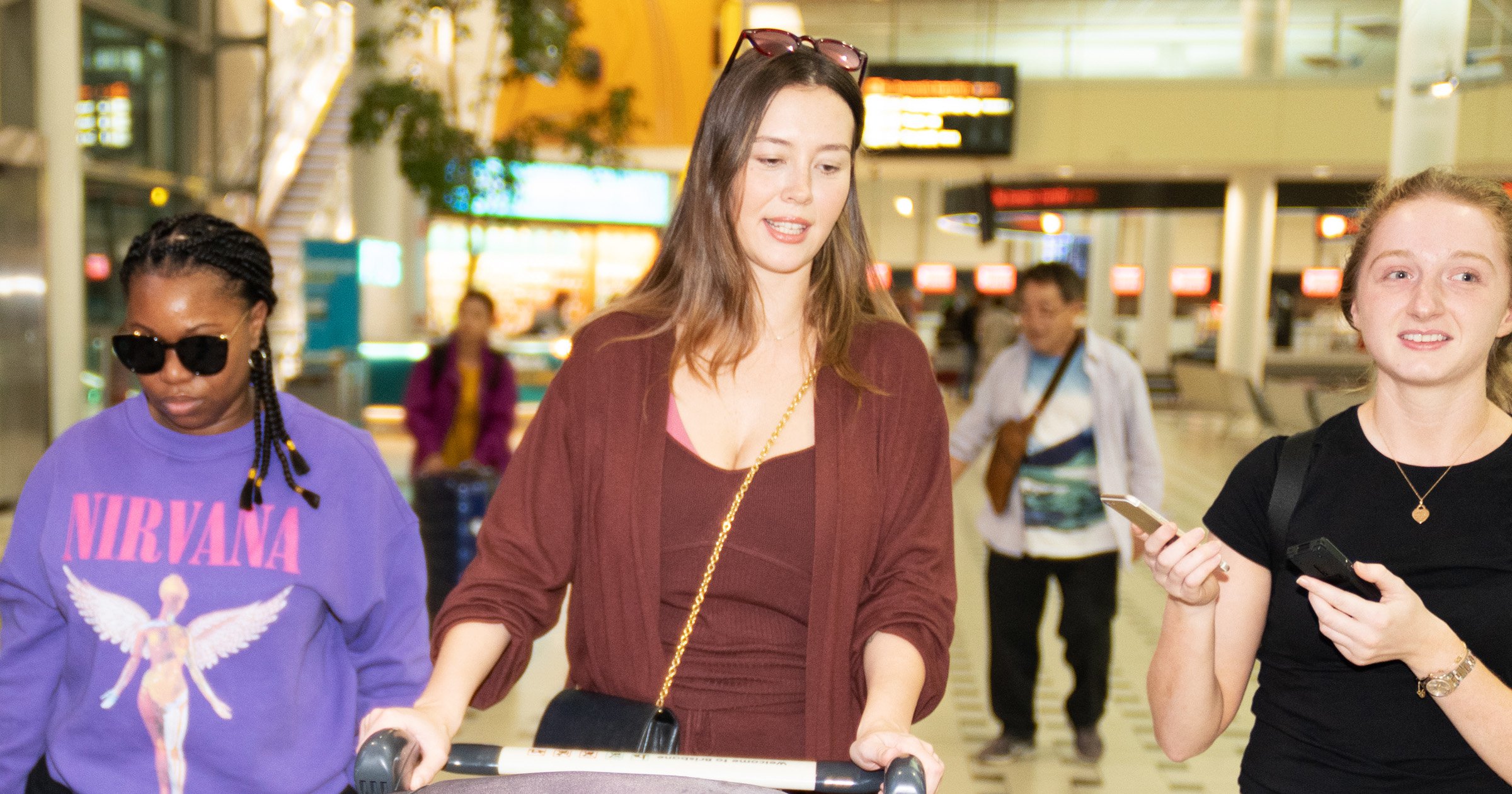 Seann Walsh’s girlfriend Grace Adderley landed in Brisbane today ahead of the first eliminations from the I’m A Celebrity… Get Me Out of Here jungle camp on Friday.

Pictured smiling and laughing, the comedian’s pregnant other half appeared to be already enjoying being on the same soil as the father-to-be.

Landing in Brisbane airport, she was the first of the campmates’ loved ones to arrive as they wait to be reunited once their attachment gets voted off the show.

The dance teacher and choreographer has reportedly been dating the former Strictly star since 2019.

She travelled in stylish dark brown joggers with a tank top and long cardigan to match, finished off by a black leather cross-body Mulberry handbag.

Pushing three huge cases on a trolley, she left the airport and made her way to her Australiana accommodation where she’ll be staying until Seann leaves the jungle.

The pair have kept details of their private relationship quiet and little is known about the brunette dance teacher that is carrying the star’s future offspring.

News of his upcoming fatherhood was discussed by Seann on an Instagram live where the celebrity was heard saying: ‘I’m having a child’.

Joking with friends, one of Seann’s companions explained it was ‘worrying’ to think of him as a dad and warned him there were stressful times ahead.

The comedian chastised the unnamed man, responding with: ‘Unbelievable. Everyone else has been really nice, that’s the worst response yet.’

Seann’s relationship history isn’t a of a linear kind when cheating allegations ruptured his marriage during his stint on BBC’s Strictly Come Dancing in 2018.

His career was left in tatters after he was pictured kissing his professional partner Katya Jones.

Discussing his mistake on the ITV competition show, Seann admitted: ‘As you can imagine I was very scared after the last time I was on a big show because the fallout was not something you would want to go back to’.

Entering camp with Matt Hancock who was also caught publicly cheating on his wife, then comedian carried on: ‘Grace talked me into doing it.

‘She convinced me it was the wrong attitude to have, not doing it because I feared what people would think, but to do it because I would have a wonderful time.’

I’m A Celebrity continues tonight on ITV at 9pm.