In the streaming age, quantity often beats out quality. But for TV fans looking to spend money on the services offering the best shows, Netflix and Hulu are the right choice.

Reelgood defined a high quality series as anything with an 8.0 rating or higher on IMDB.Hulu narrowly edged out Netflix.

Below are the numbers and a chart comparing all five services:

Prime Video hasthe biggest library of TV shows with 2,317, while Netflix has 1,966 and Hulu has 1,931. But Prime video falls short when it comes to quality: 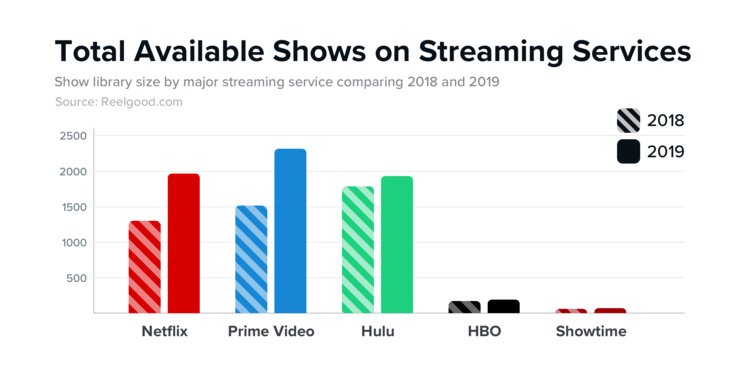 Netflix’s original shows have dominated the Emmys in recent years, a sign that the streaming giant can develop its own quality shows without relying solely on licensed content. Netflix dethroned HBO as the network with the most amount of Emmy nominations in 2018, breaking HBO’s 17-year streak.HBO reclaimed the title this year, but Netflix still nabbed 117 nominations.

Hulu has also beefed up its original programming. Its hit series “The Handmaid’s Tale” won the Emmy for outstanding drama series in 2017 anda sequel series is in development. Hulu has debutedseveral critically acclaimed new originals this year, including “Shrill,” “Pen15,” “The Act,” and “Ramy.”

Read ourfull breakdown on every major streaming service and how they compare.