Rider Strong went back to where he grew up for his latest directing role — and he also went back in time. The Cabin Fever actor, 41, got behind the camera for Typhoon’s “We’re In It” music video, which debuted on Tuesday, July 20.

Strong spearheaded the concept, which focuses on two friends (played by Jon Huertas and Leif Gantvoort) who invent a way to “tap” into redwood trees in order to time travel to prevent the death of their third friend, played by band frontman Kyle Morton. 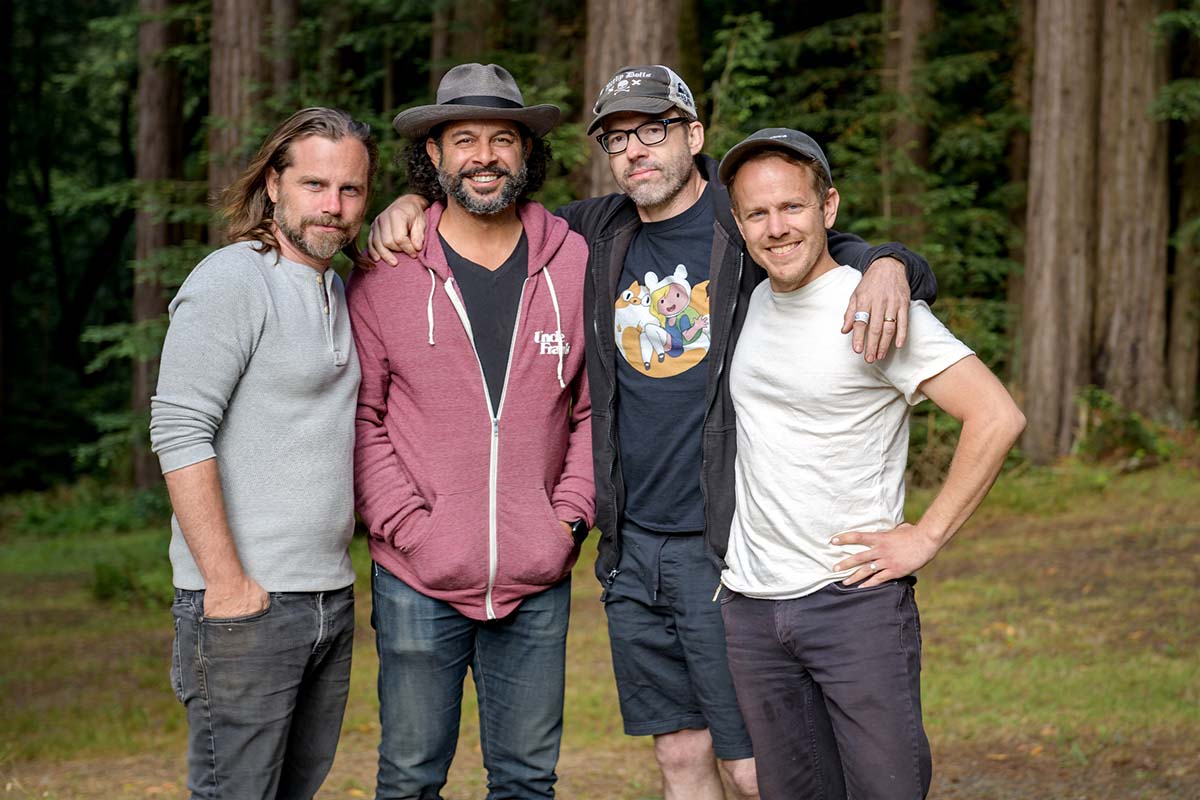 “I feel very lucky that I became best friends with my favorite band. Kyle, we send each other stuff all the time like demos. I send him every script I write,” Strong told Us Weekly exclusively. “We give each other notes and feedback all the time. He sent me demos for the whole album, like last year. I think it was probably in October. We started going back and forth about this song in particular. I just loved it.”

The Boy Meets World alum added that the video has “it’s own clear narrative,” something he was excited about.

“I’m a very narrative filmmaker,” he told Us. “What I took from the song is that it’s about a strange friendship and sort of troubled history and trying to make it work. And there’s a suicide attempt in there. It just kind of came to me. I’ve always been kind of obsessed by travel and travel stories.”

While Huertas, 51, and Gantvoort’s characters set their plan in motion, distrust and paranoia quickly set in, as they start to wonder if they are actually repeating history. 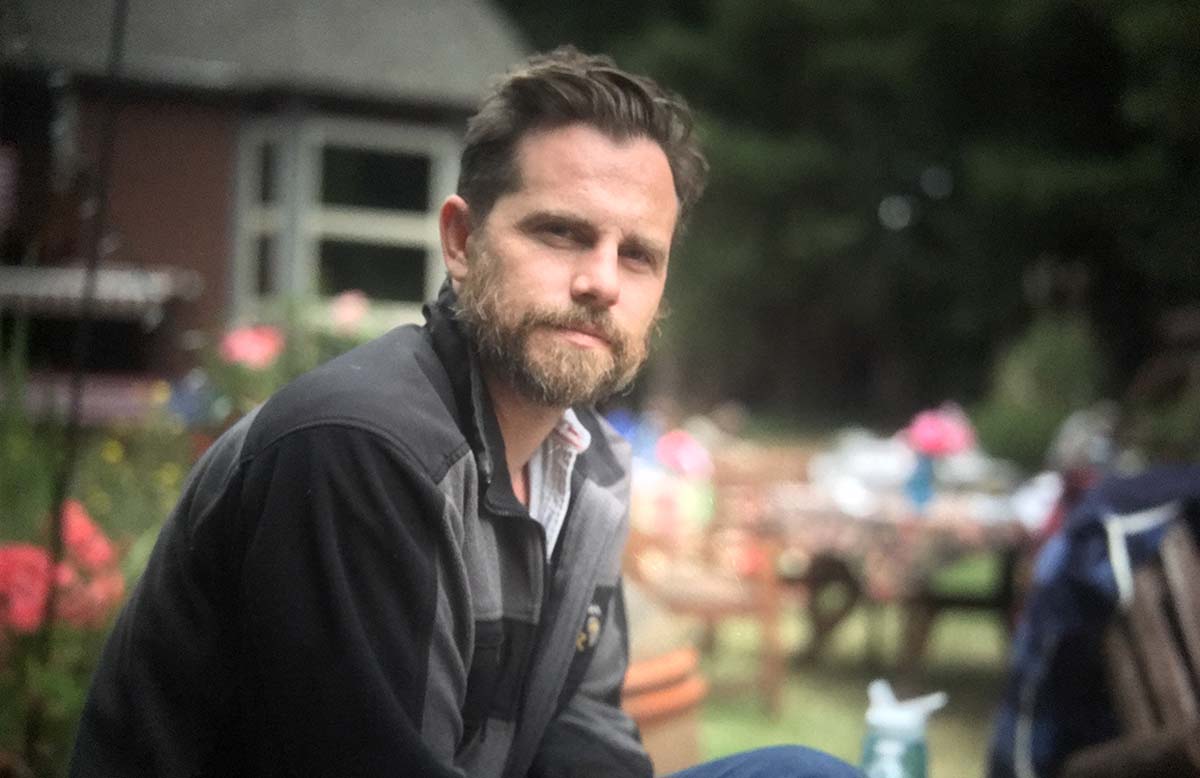 “When you have a strange relationship with somebody and you start fighting and arguing and trying to fix your problem, it sometimes feels like you keep going over and over the same issues and running into yourself and having to sort of confront your own past behavior in relation to this person,” Strong explained of his vision. “And that just kind of spiraled into this crazy time travel story.”

The short film was shot in three days in the Redwoods of Sonoma County. Strong was also joined by cinematographer Elisha Christian and a small crew amid the COVID-19 pandemic.

“I grew up in the Redwoods, so I’ve always thought it’s such a beautiful place to film. The whole thing kind of came together. I wrote it in about two days, and I sent it to Kyle. He’s like ‘Oh yeah, we’re doing this.’ And I was like, ‘And you’re going to be in it,’” Strong told Us. “I was very specific with this because there is so much story to try and get across in four and a half minutes. I knew I couldn’t mess around. I had a storyboard. Every single shot was really planned out. … [One] shot was entirely outside during magic hour. We watched a lot of movies that take place in the woods.”

Strong and Morton met years ago when Typhoon played at the actor’s wedding — very last-minute. The Cosmic Radio actor tweeted that he liked the band’s album, White Lighter, and they reached out and invited him to their show.

‘Boy Meets World’ Cast: Where Are They Now?

“I said, ‘Well, I’m actually going to be up in Portland, which is your neck of the woods, because I’m getting married.’ And they were like, ‘Well, we are finishing our tour the day before your wedding.’ And I was like, ‘Well, do you want to come to my wedding?’” he recalled. “My wife, [Alexandra Barreto], that was our album while planning our wedding. It’s an album in a lot of ways about getting older and the existential threat that comes with getting older. We were just planning our wedding and living in this album and I kind of threw it out there as a joke. And then they were like, ‘No, we’ll come. Will you feed us?’” 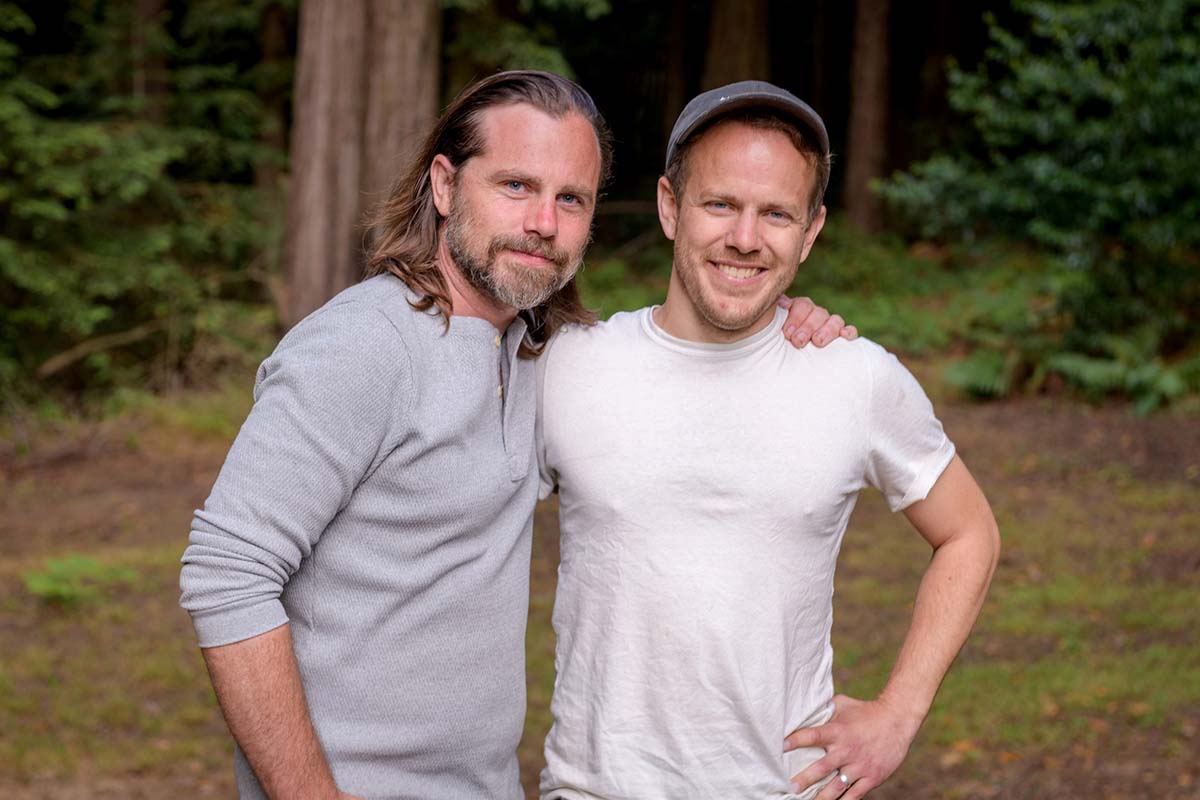 Typhoon showed up — about seven people in tow — to the reception and performed for the newlyweds. (The couple later welcomed son Indigo, 6, in January 2015.)

“It was insane. It was pretty small. It was only a hundred of us and we set up a camp outside of Portland. They put on this performance. It was just the greatest,” the “Literary Disco” podcast host told Us. “And then Kyle and I just started emailing each other and we realized [we have the same interests], like, the books we read, the things we think about and the kind of artistic projects we want to take on. I’m going to be working with Kyle I hope for the rest of my life.”

Strong’s career began in front of the camera, as he’s best known for his role as Shawn Hunter in the beloved family show Boy Meets World, which ran from 1993 to 2000. He’d go on to direct a few episodes of its revival, Girl Meets World, in 2016.

“I’ve always thought the hardest thing was just learning what a director does. I think a lot of times as an actor you take it for granted, especially in television,” he told Us. “You just think, oh the camera just shows up. It’s going to be set up there. And as a director, you realize the director is planning and mapping out what the look and the feel is. That’s all stuff I’ve spent in my early ‘20s learning and teaching myself and studying because as an actor, you really show up last minute to do your thing.”

An acting background has come in handy for the writer. “I think actors feel comfortable with me. There’s a shorthand there and there’s a mutual respect. But, I mean, I’ve definitely worked with directors who don’t know how to talk to actors. They may have an incredible ability and vision but they can’t communicate what they need to the actor,” he explained. “I definitely feel like I have a leg up on other directors.”

For Strong, directing is his priority moving forward. He’s written and directed short films that have played over 60 festivals and in 2011, his film The Dungeon Master won “Best Short” at the Tribeca Online Film Festival.

“I really love it,” he told Us. “I really like putting stuff out there like this. I want to make movies. I will continue to make these videos or short films or whatever. If people give me a budget, then I will tell a story. I’m obsessed. It’s the greatest art form. A combination of personal expression and acting and sound. You bring it all together. … That’s all I want to do — make movies.”

For more on Strong, go here. And watch “We’re In It” above!