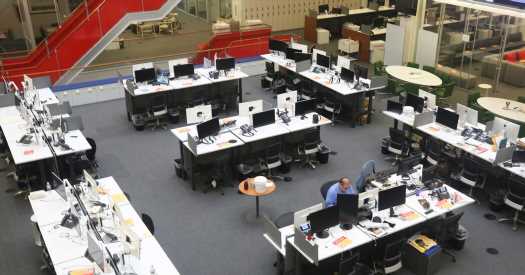 Times Insider explains who we are and what we do, and delivers behind-the-scenes insights into how our journalism comes together.

I’m in a gigantic newsroom in a 52-story tower in the busiest neighborhood of one of the busiest cities in the world and … nothing. Not a sound. A sweeping look around reveals a barren landscape of empty desks and empty seats. A glance over the railings reveals two more floors in a similar state of nothingness.

Such is life on a recent Thursday night at The New York Times, where I, and a few other intrepid souls, have started to resurface after over a year of working from home. On most Thursdays on the fourth floor, I see a few colleagues from the Print Hub, the department responsible for producing the daily print newspaper. On the third floor, there are two or three senior editors. Walking around, you spot a few faces. But not many.

“There were a couple of days early on when you saw practically no one,” said Mark Getzfred, a senior editor, who said he returned to the office full time in May for a change of scenery and to give his wife a little elbow room at home.

Alan Robertazzi, editor of print production, has been coming in a couple of days a week since September, when The Times first gave employees the option to return, for much the same reasons. “I found it to be a refreshing change of pace,” he said. “For me, working from home blurred the line between work life and personal life, and I like having those clear boundaries.”

My reasons for coming in are roughly the same, even though it sometimes feels silly to schlep all the way in from Long Island.

There is something of a Macaulay Culkin “Home Alone” vibe here in our virtually empty tower, an intoxicating sense of having the house to yourself to run down the hallway, play loud music or, I don’t know, sit in the executive editor’s chair and pretend you’re running the place. The self-service cafeteria is stocked with salads, sandwiches and neat little stacks of Reese’s Peanut Butter Cups.

And yet, there also is a kind of Charlton Heston “Omega Man” eeriness in wandering through a civilization seemingly frozen, like Pompeii, in a post-apocalyptic moment, especially when our fast-paced jobs entail keeping up with every piece of breaking news, 24/7.

“The entire department was a time capsule of our sudden departure,” said my fellow Print Hub editor Dan Adkison, who said he started coming back one day a week because he wanted to ease his way back into office life before it was teeming with humanity again. “The calendar on my desk was still set to March 10, 2020, and my handwritten notes for the March 11, 2020, issue were still lying next to my keyboard. Newspapers from 2020 were strewn about the tables.”

One of our designers, Rebecca Rillos, also said she needed a few trial runs before full immersion. As odd as it was in the well-preserved office, she said it was much more jarring to see how much had changed on the outside — the shuttered stores, the vanished coffee joints.

Like other businesses worldwide, The Times is still preparing for our official Return to Office, or R.T.O. Once set for July, it has been pushed back to early September with plans for a mix of in-office and remote work. Because we’ve proved we can put out the newspaper from home, there are strong arguments that Work From Home, or W.F.H., could be a part of our future.

The appeal is undeniable: sitting in your own chair with your dog curled up under your legs; the, shall we say, relaxed-fit work attire; and the short commute “home” to the sofa. (Do I miss hanging around Penn Station at 1 a.m. with drunken Rangers fans? I do not.)

What I do miss is the thrum of the newsroom, the energy of the city that used to never sleep, the clamor of phones, keyboards and my co-workers tossing out headline ideas or laughing over a gallows-humor joke on deadline.

“Every time I see a new face in the newsroom,” Dan said, “I just want to run up and tell them how happy I am to see them again in person instead of on a little box on a screen.”

For now, though, real live people remain a rare sight at The Times. It’s still quiet. Too quiet. Kevin McCallister and the Omega Man could use a little company.