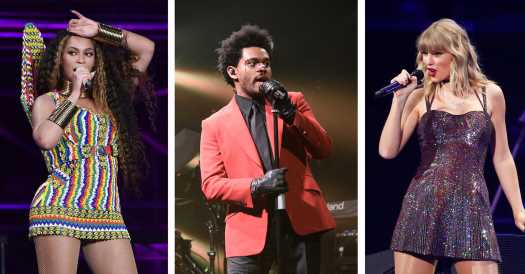 When music fans tune in to the 63rd annual Grammy Awards on Sunday night, with Trevor Noah as host and performances by nearly two dozen stars including Taylor Swift, Cardi B, Dua Lipa and BTS, they will see the music world coming together in celebration and friendly competition after a grueling year.

Beyoncé, who has nine nominations, will be aiming for her first win in a major category since 2010, while Swift has five nominations connected to “Folklore,” an album made entirely in quarantine. The show will also address the pandemic’s painful impact on music, with an extended “in memoriam” segment and a spotlight on the independent venues that represent music history, but which have suffered devastating blows after a year of lost business.

But behind the scenes, the industry is waging a war for the soul of the Grammys, after years of accusations of bias against women and Black artists, and complaints over an opaque voting system that critics say is unfair and out of touch.

Every year there are winners and losers. But this year’s biggest controversy highlights the way names get on the ballot in the first place. It involves the Weeknd, the Canadian pop star whose sleek, high-concept earworms like “Blinding Lights” have broken chart records and drawn wide critical acclaim; last month he also played the Super Bowl halftime show, perhaps pop music’s biggest big-tent moment. Yet when it came time for Grammy nominations, the Weeknd got nothing.

Why? Scrutiny has zeroed in on a little-understood part of the Grammy process: the role of anonymous expert committees, which review initial nomination choices by the thousands of music professionals who make up the voting membership of the Recording Academy, the nonprofit group behind the awards, and — for 61 of the Grammys’ 84 categories — have the final say about who makes the cut. To the Grammy leadership, the committees are a check-and-balance step to preserve the integrity of the awards. To suspicious artists, they are unaccountable star chambers that can subvert the will of the voters.

For the Weeknd, the entire process has proved unacceptable. In a statement to The New York Times, he said he would boycott the awards from now on. “Because of the secret committees,” the Weeknd said, “I will no longer allow my label to submit my music to the Grammys.”

He joins a growing list of Black stars, like Drake, Kanye West and Frank Ocean, whose public rebukes of the Grammys are a threat to an institution that views itself as a supportive home for the entire music community. In addition to Beyoncé and Swift, top nominees include Lipa with six nods, along with Billie Eilish, Megan Thee Stallion, Post Malone, Roddy Ricch, Coldplay, Haim and Jhené Aiko.

Yet the Grammys’ poor record of recognizing people of color in the top awards — the last Black artist to take album of the year was Herbie Hancock in 2008, for a tribute to Joni Mitchell — has alienated a crucial constituency.

Harvey Mason Jr., a producer and songwriter who is the academy’s interim chief executive, said the organization is dedicated to improving itself. In late 2019, a task force led by Tina Tchen, the former chief of staff for Michelle Obama — which was convened after an outcry over the representation of women at the awards — made a number of recommendations to help diversify the institution; most are being implemented.

“We’re all disappointed when anyone is upset,” Mason said in response to the Weeknd’s statement. “But I will say that we are constantly evolving. And this year, as in past years, we are going to take a hard look at how to improve our awards process, including the nomination review committees.”

Even though this process is publicly disclosed, it is still largely not understood by the music world. The four pop categories, for example, have no such committees.

As part of its efforts to change, the academy has invited thousands of new members, hired a diversity officer and brought more women and people of color into its committees and leadership. Pre-Grammy events this week have included “Women in the Mix,” highlighting women in production and engineering fields, and a gathering of the Black Music Collective, a new advisory group that aims to “amplify Black voices.”

“The changes have been transformative,” Mason said in an interview.

The Grammys are not alone in promising to change. After last summer’s Black Lives Matter protests, major record companies, broadcasters and streaming platforms pledged hundreds of millions of dollars in donations and said they would work to make the music world more inclusive and equitable.

But the Grammys are an especially public target, and whether the academy’s moves will satisfy its critics is unclear. They come after a bruising conflict with the academy’s last chief, Deborah Dugan, who was brought in as a change agent yet dismissed after five months on the job — and just days before last year’s ceremony. The academy said she mistreated an employee, but Dugan said she was retaliated against for criticizing the institution. In a legal complaint, she accused the academy of voting improprieties and rampant conflicts of interest. Her case is in arbitration, and both sides declined to comment about it.

The conflict with the Weeknd goes to the heart of concerns that the Grammys’ voting procedure is flawed. It also illustrates the fulcrum that the Grammys are supposed to represent between art and commerce: Its purpose is to recognize the work that its members — artists, producers and songwriters — value most highly, but the academy inevitably faces pressure to reward success.

Chris Anokute, a longtime music executive, said he trusts Mason as a leader but is less trusting of what happens behind closed doors at the academy. The Weeknd, Anokute said, “clearly made the album of the year,” at least as far as popularity goes.

“If his peers didn’t vote for him, that’s a shame — if that’s the truth,” Anokute said. “We don’t really believe that’s the truth; there’s just no way. But we really don’t know.”

For viewers at home, these issues may be invisible. The Grammys, originally planned for January, were postponed six weeks over concerns about the spread of coronavirus in California. The show’s new executive producer, Ben Winston, has designed the Grammys as an antidote to disconnected pandemic awards shows that feel like video conferences.

Performances will occur on five stages, arranged facing each other in the round, near the awards’ usual home of the Staples Center in downtown Los Angeles. Some will be taped, some live, but the continuity of their presentation will make it hard to tell which is which.

“This is not a virtual Grammys,” said Winston, who is an executive producer of “The Late Late Show With James Corden,” in an interview. “Zoom fatigue is not something that will be part of the show in any way.”

For industry insiders, practically the entire event will be a reminder about the Weeknd and the questions raised by his absence.

To critics, the purpose of the nomination review committees is murky. Mason said they were established in 1989 “to eliminate the potential for a general-awareness bias that might favor artists who enjoy greater name recognition over emerging artists, independent music and late-year releases.” The Grammy voting process, he added, “is 100 percent peer-driven.”

The makeup of committees is kept confidential to protect them from industry lobbying and fan attacks, Mason said. Committee members, selected by the academy, review the music shortlisted by voters, and whittle those names down to a final ballot. In all but the top four categories — album, record and song of the year, and best new artist — committee members can add names not initially selected by voters, according to official Grammy rules.

Yet by enforcing their judgment over those of rank-and-file members, the committees have drawn questions about their motivations. Dugan accused the committees of favoring artists with connections to academy board members. Mason declined to comment on her allegations.

A member of Tchen’s task force, who spoke on the condition of anonymity to discuss its work, portrayed the role of the committees as contradicting the academy’s public position that awards are fully decided by industry peers. “The idea came through,” this person said, “that they do not want it just voted on by the hobbledehoy of the music industry.”

Wassim Slaiby, the manager of the Weeknd (Abel Tesfaye), said in an email interview that it was still unclear why his client was not nominated. “We were many weeks and dozens of calls in with the Grammy team around Abel’s performance right up to the day of nominations being announced,” said Slaiby, who is known as Sal. “We were scratching our heads in confusion and wanted answers.”

While the Weeknd tweeted his displeasure at being locked out of the nominations, some observers wondered online whether a desire not to have talent overlap at the Grammys and the Super Bowl — both on CBS and originally scheduled just a week apart — was an issue. The Grammys denied that the Weeknd’s shutout had anything to do with the halftime booking, saying that the voting for nominations had ended before his N.F.L. performance was announced. And of course it is possible that voters simply did not favor the Weeknd.

For now, attention has focused on the committees, with many in the music world agitating for them to be reformed or abolished altogether. Mason, who is also the chairman of the academy’s board, said there have been discussions at the academy about scrapping the committee process, following proposals by members, but he declined to elaborate further.

Slaiby said he hoped his client’s stance inspires other artists to speak out.

“The Grammys should handle their legacy and clean it up to raise the bar to a level where everyone could be proud to hold up that award,” he said. “This is Harvey’s chance to step up and have his legacy be the guy who got the Grammys finally right.”