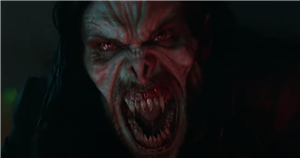 Dr. Michael Morbius isn’t your grandmother’s vampire — oh no, he’s much more frightening. Nearly two years after dropping the first teaser trailer, Sony’s Jared Leto-led film released the full trailer on Nov. 2, and it’s chillingly scary. A closer look at the upcoming film shows Oscar winner Leto as he takes on the role of convoluted antihero Michael Morbius, a doctor whose illness leads him down a dark path of no return. Stricken with a rare blood disorder, Morbius desperately searches for a cure to save others from suffering a similar fate. But when he undergoes an experimental treatment that turns him into a living vampire, he discovers that “the remedy is worse than the disease.”

Created by Roy Thomas and Gil Kane, Michael Morbius first appeared in 1971’s The Amazing Spider-Man #101. The character joined Spider-Man’s ever-rotating gang of villains before taking a turn for the antihero, similar to Sony’s Venom. The trailer gives fans all sorts of peeks into the dark and scary world of Morbius and even includes a surprise cameo from Michael Keaton, who played Adrian Toomes/Vulture in Marvel’s Spider-Man: Homecoming. Will Morbius be the first Sony film to properly cross over with the Marvel Cinematic Universe? We’re not so sure, but you can be the judge of that when Morbius arrives in theaters January 2022! Watch the official trailer for the forthcoming Sony movie above.