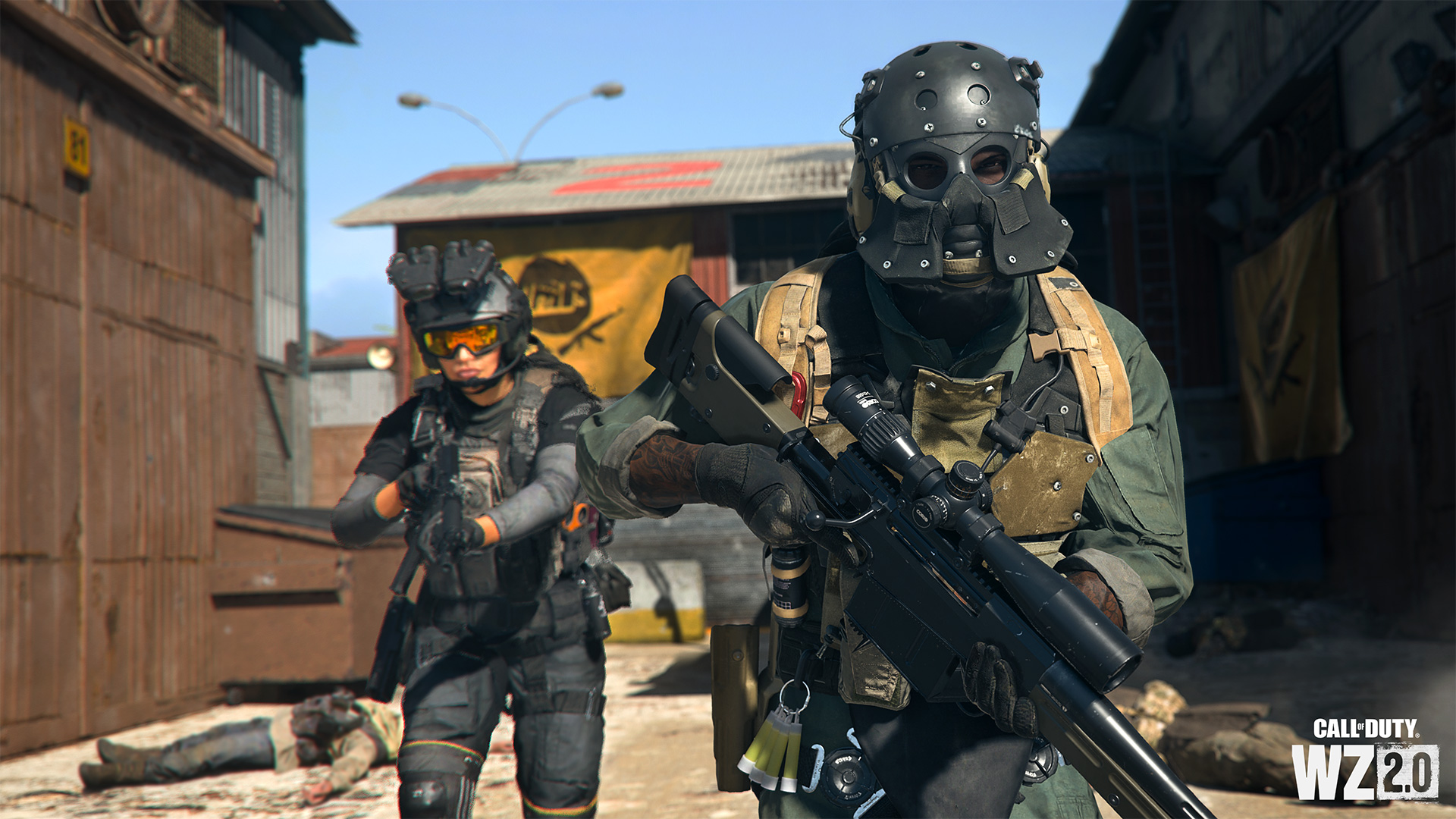 The Friday letters page thinks 2022 has been a very good year for video games, as one reader hopes for a Red Faction reboot.

To join in with the discussions yourself email [email protected]

Sick gameplay
I’ve seen some mixed comments about Call Of Duty: Modern Warfare 2 in the last few weeks but I definitely sit on the side of the fence that says it’s a really good multiplayer game. I haven’t played the campaign, and usually don’t, so I can’t comment on that but for me this is the best the game’s been in at least four years.

What also impresses me is how good Warzone 2 is. Obviously it’s only just come out, but I am absolutely loving it so far and seriously considered phoning in sick to play it some more today. It’s got the same super slick shooting as Modern Warfare 2 but the new map is great and I love all the new modes and options.

This is just as complete a game as Modern Warfare 2 and yet it’s totally free. There is still a question over DMZ, because I know some respected people hate it, but I’ve had a lot of fun with it. Although I’m willing to admit I should give it more time.

For me this is much more interesting than Apex Legends and definitely more so than Overwatch 2 and Halo Infinite. I was trying to play Overwatch 2 as I waited for the new Warzone to be released but I just do not like the gunplay and considering how much people complain about bugs in Call Of Duty, Overwatch 2 is filled with them.
Torso

A good crop
I’m beginning to think that 2022 might actually end up as a pretty great year for game. It’s not got the depth but it does have the quality, with even the new Pokémon getting a good review, on top of Sonic Frontiers, Bayonetta 3, God Of War Ragnarök and all the stuff that came out at the beginning of the year like Elden Ring.

There have been some disappointments but can anyone really say they were looking forward to Gotham Knights that much? Or expecting it to be good? If Callisto Protocol also turns out good then I’m going to make it official and say that 2022 has been an above average year.

I’m not sure what to make of 2023, given how little has been confirmed, but you’ve got to assume it’s got the potential to be even better, since publishers will be less held back by the pandemic and eager to get things back to normal. Or at least that’s what I hope.
Sestan

Just the voice
The problem I have with a Splinter Cell remake is that they’re bound to recast Michael Ironside, because he’s getting on a bit now, but his voice was half the appeal to me. The common thing now is that whoever’s doing the voiceover for a character has to do the motion capture as well and that seems to me to be very limiting.

Surely the freedom that video games give you is that anyone can pretend to be anyone else. But apparently actors can only play people that look and act like them? Games are much closer to animation than live action movies and that’s a good thing, because of all the crazy things it lets you do that aren’t possible in reality.

Chaining yourself down to only what an actor can physically do themselves seems so short-sighted. I hope it’s just a passing phase.
Focus

Anxiety or apathy?
I agree with Valve’s anxiety regarding Half-Life 3.

But why they don’t put some of those Steam greenbacks into other developers is beyond me. Let loose, free to use Unreal or whatever they’re comfortable with and see what happens!

I’m sure there’s the right talent out there chomping to be paid to make a new Lambda adventure and cheer us all up.

(Kudos to them for leaving the Black Mesa team alone and arranging for it to go on official sale.)
Tundra

Double saving
Downloaded the Apple TV app to my PlayStation 4, as I’m going to sign up due to Game Pass offering three months free as a perk. Upon loading the app on PlayStation 4 it said a three month free trial was included with my PlayStation 4. Not sure if anyone else was unaware of that, like me.

Foundation and Severance look good and I noticed that Nope was on there too. I’m going to sign up for three months with the Game Pass offer, then sign up again after that for three more months with the PSN offer (the Xbox and PSN accounts have different emails) as the PlayStation 4/5 offer is redeemable until July 31st 2023.
Simundo

Martian Row
I know they didn’t say Saints Row had been a flop but it’s pretty clear it’s been a disappointing at least. You don’t give over a developer to someone else to control if things have gone well. Although I’m not sure what Gearbox could really do, given their problems with open world maps in their own games.

I always felt Red Faction was Volition’s best franchise anyway and I’d much rather see more of that. The sci-fi setting and total destruction that was possible was really cool even in the Xbox 360 era so I’d love to see what it could be like now.

If you think about it Saints Row hasn’t really got a unique selling point anymore. It’s just GTA with better controls, except GTA’s controls aren’t that bad anymore. Red Faction has a lot of unique things going for it though and with just a better story and character I think it could be a real classic franchise.

I don’t imagine it’ll happen though. Volition will just be slowly undermined until they’re stuck making DLC for Borderlands and whatever. It’s exactly what happened with all Activision’s studios.
Big Mike

Thank you for your patronage
Just realised the other day that I’ve now been reading Digitiser/GameCentral for just over 20 years, meaning I’ve now earned another V, putting me in the ‘VVVVLTR’ club.

Made me happy, even if I’m the only one who still keeps count!

Keep up the good work, GC. I read you every day.
Sparky the Yak

Isolated praise
Not sure why sci-fi horror games have suddenly become so common place but I’m not going to complain. Looking forward to Dead Space and The Callisto Protocol but I really wish that Alien Isolation had been a bigger hit and that we were getting a sequel to that.

I do understand why it wasn’t more successful and I admit the game has some flaws, especially in terms of its length and story, but the atmosphere and the fear… I’ve not played anything like it since the golden age of Silent Hill and Resident Evil.

I was terrified to even turn my character’s head in that game, even when it wasn’t even clear if the alien was nearby. The graphics were amazing, not just on a technical level but in the way they replicated the look of the original film.

I’ve heard there’s a new Aliens game coming out that may be something like in the same style but I’m sure they’ll try to make it more action-based, which is bound to also make it less scary. Oh, well maybe the new Alien movie will inspired something new.
Tosh

Inbox also-rans
I remember wishing for years we’d get a proper, modern Elite game and then all we got was the boring Elite: Dangerous. I’d love to see someone else do something in the same style but that was actually fun.
Melkor

Isn’t about time we had news about another Ace Combat? I thought 7 had been an unexpectedly big hit, and with Top Gun: Maverick being so big right now you’d think they’d want to jump on that.
Cardi

GC: A new one is in development, but there hasn’t really been any information on it yet.

This week’s Hot Topic
The subject for this weekend’s Inbox was inspired by reader Neil Down, who asks what you think of review scores and the current state of video game criticism.

Do you want reviews to be accompanied by a score and if so what’s your preferred scale in terms of how many it’s out of? Are there any particular sites, including this one, that you think could do things differently and what do you think of those that don’t have a score at all?

Is there anything you’d change about how we or others go about reviews (other than the timing, there’s nothing anyone can do about that) and do you think the overall standard of reviews today is better or worse than it used to be? What do you think of aggregate sites like Metacritic and do you use them?

The small print
New Inbox updates appear every weekday morning, with special Hot Topic Inboxes at the weekend. Readers’ letters are used on merit and may be edited for length and content.

You can also submit your own 500 to 600-word Reader’s Feature at any time via email or our Submit Stuff page, which if used will be shown in the next available weekend slot.