Laughter doesn’t echo off clouds. That’s the first challenge of outdoor comedy. According to common wisdom, the ideal conditions for stand-up — small dark room, low ceiling — are pretty much the opposite of al fresco comedy. There was actually a history of such performing, before the pandemic, with its own street-comedy legends. But in the past year, a niche became mainstream, and now, there’s a new genre of special, tried by Chelsea Handler, Colin Quinn and others. Four more funny comedians have recently gotten laughs taking the special outside, and considering the loosening of rules for indoor performance, they could also be the last of their kind.

No artist embodies the globalization of stand-up over the past decade like Vir Das, the prolific Indian comic currently shooting a new Judd Apatow comedy. This role might be a breakout if Das hadn’t already broken. With six specials and nearly 8 million Twitter followers, Das is a massive star, just not yet in America. But his savvy, charismatic comedic style seems perfectly suited to cross cultures. In videos shot in a forest in the southwest of India, he has been releasing chunks of jokes monthly this year (he took a break in April for filming). Each takes on a meaty subject big enough to be of interest across the world (religion, freedom of speech, the relationship between East and West).

He’s quick to tie together different cultures, making connections, for instance, between supporters of Trump, Brexit and the Indian Prime Minister Narendra Modi. But this sprawling ambition doesn’t lead him to make the mistake of avoiding specificity. His comedy is filled with references to Indian culture that I didn’t understand, but he manages to explain quickly or provide enough context for me to appreciate the joke.

You don’t need to have seen a speech by Modi to find Das’s imitation of his speaking style funny. Das is particularly sharp on accents throughout the world and their meaning, perhaps second only to Trevor Noah, another digitally savvy comic who’s adept at jokes that span continents. Poking fun at how Indians adopt American or British accents, Das points out that they never pick up German or Mexican ones, joking that Indians are “aspirational” in their accents. But his local jabs lead to a larger critique of the West. After a reference to Harry Potter, he points out that the books are popular in India. “We love British magic here,” he says. “Remember that trick where they made all our resources disappear?”

Brian Regan, ‘On the Rocks’

Stream it on Netflix 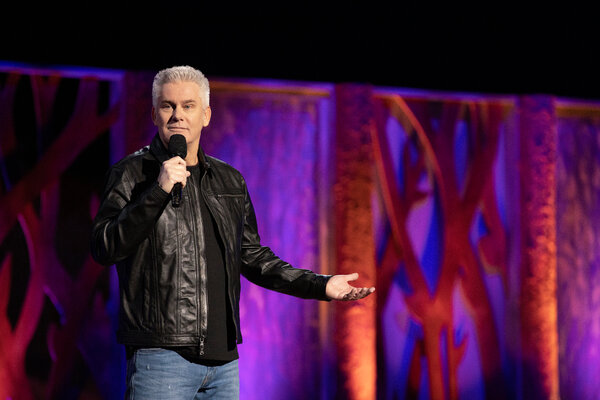 At the start of his latest special, the venerable stand-up Brian Regan draws attention to his suddenly gray hair. “Covid hit,” he said. “I went into hibernation and came out a senior citizen.” And that is the last topical note of this finely crafted hour of minor-key observational jokes. Regan has always been good at escapist observational humor, and he doubles down on lightweight fun, exploring standard subjects like animals, food and language. (“Orchestra pit. Those words don’t belong together.”) There’s one elaborate, standout bit about his O.C.D., but his work is far from personal. It’s old-school joke-telling, with broad mugging and utilitarian transitions (“I like words”). And while he’s outdoors with a masked crowd, the sound design and camerawork do not emphasize anything different from a prepandemic show.

Many will find something refreshing about entertainment that feels from another, more carefree time. Regan (who contracted Covid-19 in December) is the rare comic who regularly tells jokes you will have no trouble letting your quarantined kids overhear. His rhythm is most similar to that of Jay Leno from the 1980s, and while they both are workaholics, Regan has proved more consistent. It’s easy for the casual observer to overlook the considerable technical prowess that Regan has honed over decades (his patience with setups, the spot-on word choice). Even with his clowning physicality, eyes popping, darting, brows raising, he makes stand-up look effortless.

Stream it on Apple TV

A honking car is one of the ugliest sounds of everyday life. We’ve been conditioned to associate it with anxiety, error, even danger. Expecting it to stand in for laughter at a comedy show is like replacing kisses with coughs and hoping romance will continue just fine. So pity comics like Erica Rhodes who have been making the most of performing at drive-in theaters. “The good news is the numbers are finally going down,” she says in her intermittently amusing hour, holding the beat before the punchline, “Of people pursuing their dreams.”

Rhodes makes comedy out of malaise, plastering on a smile after jokes about depression, horrible dates and the disappointment of having one towel in your 30s. There’s a tension in this incongruity that makes for a promising stand-up persona. But too many of her more ambitious bits, like the one about dating online, seem unfinished, starting strong, gaining momentum, then petering out casually. In some cases, it’s the reverse. She has a very sharp bit about how ending digital conversations these days results in an arms race of emojis that frustrates everyone. But she starts with a sentence about the end of the period that doesn’t entirely land. It’s a good joke looking for a better setup.

Rent or buy it on Amazon

In her persistently funny new special, Ester Steinberg declares that she found the perfect guy, before listing the three things he has that she’s always wanted: He’s tall, he’s Jewish and he has a dead mom. It’s one of many new spins on old Jewish jokes in a set that represents a breakthrough for this skilled comic. It’s notable less for the freshness of the content (weddings, motherhood, strip clubs) than for the giddy gusto of its delivery.

Steinberg, who gave birth only six weeks before shooting this special, has been a charismatic sparkplug of a comic for years, but there’s a nimbleness here that is the work of someone who has come into her own. Layering jokes within jokes (at the same drive-in where Rhodes performed), she gets laughs without wasting words, veering from a flamboyant whine to vocal fry to deadpan dry. Her physicality somehow manages to evoke Bill Burr and Kate Berlant. She weaves in references to the pandemic without derailing her mischievous spirit and defuses the ridiculousness of performing for cars right away. “I’ve been doing comedy for many years,” she says, “and I finally realized my fan base is Kias.” Then after some honks and laughter, she turns to the audience and says with a straight face. “This car knows what I’m talking about.”