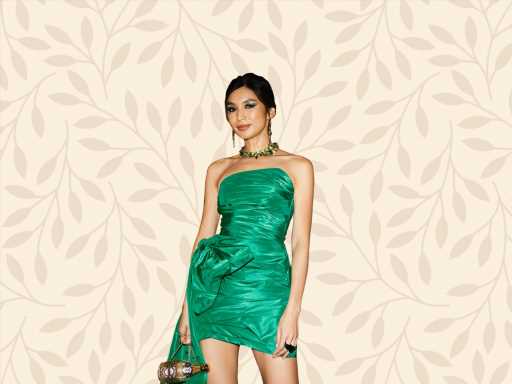 From Eternals to Crazy Rich Asians to Raya and the Last Dragon, Gemma Chan is everywhere. We sat down with Chan to discuss combatting anti-Asian hate, why Crazy Rich Asians made her parents cry, what it was like to work with Angelina Jolie, Salma Hayek, and Chloé Zhao in Marvel’s Eternals, and how she may have once fangirled Lucy Liu at a Comic Con so much so that she could barely speak. Chan also told us why she’s working with the L’Oreal Paris Women of Worth campaign to highlight the work of activist Michelle Tran, one of the co-founders of Soar Over Hate, an organization dedicated to the protection of Asian and Pacific Islanders, who will be honored at L’Oreal Paris Women of Worth event that will air on NBC Dec. 16 along with nine other women.

The rise of anti-Asian hate

With the surge in anti-Asian attacks recently, Chan was inspired by the work Tran’s organization is doing to help provide support for the Asian community. During the pandemic, Tran, a medical student in NYC saw the anti-Asian incidents rising and started Soar Over Hate with her youth mentee. Together, they “seek to empower the next generation of AAPI leaders with a college scholarship fund and free therapy designed to promote healing from racial trauma.” In addition to her medical career, Tran says, “As a L’Oreal Paris Woman of Worth, I hope to demonstrate that love is more powerful than hate, and that healing can prevail even in the darkest of circumstances.”

Chan confesses to us that when she and her parents went to the Crazy Rich Asians premiere, they cried. Seeing not just their daughter on screen, but Asians represented on film, was overwhelming, she explains, saying, “You don’t realize what you have been missing until you see it.” As for which Asian actors inspired Chan, she quickly answers, “Lucy Liu (and) Sandra Oh!” In fact, she ran into Lucy Liu at a Comic Con, and well let’s just say Gemma Chan is all of us. Watch her confess her fangirl moment in the video. She jokes, “She looked at me like I was crazy.” (Does Chan realize that she probably has the exact same effect on people today?)

Chan also opens up about what it was like working on Eternals with director Chloe Zhao and co-stars Angelina Jolie and Salma Hayek. Although they were working all the time and didn’t have much time to socialize, Chan is in awe of her female co-stars, who she describes as “feisty, assertive and funny.” She loves what both Angelina and Salma stand for, and not just professionally. “Salma is a mother bear,” she says. And as for Angelina, Chan claims she’s really great at throwing something. Maybe the best — but you’ll have to watch the video to find out what.

Following the Eternals, Chan will next be seen in Don’t Worry Darling, with another woman director, Olivia Wilde, and someone named Harry Styles. (Is a Harry Styles duet in Chan’s future? We can’t wait to find out!) Angelina Jolie, Salma Hayek, Chloe Zhao, Lauren Ridloff, Michelle Tran, Lucy Liu, Sandra Oh and Gemma Chan. Women of worth, indeed.