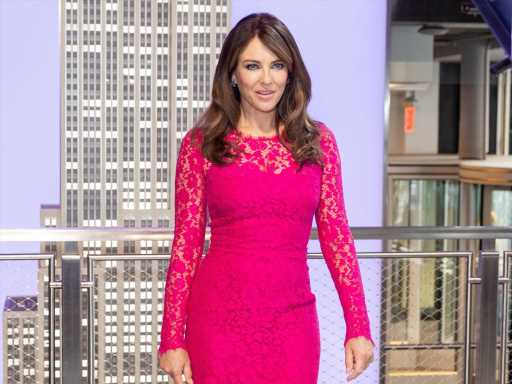 Elizabeth Hurley probably didn’t expect her day at the beach to include a sea-creature rescue, but that’s exactly what she did, saving the lives of two huge starfish. The British actress shared her sweet oceanside moment with her followers and gave an update on how they are doing.

Wearing a stunning turquoise bikini accented with gold chains, Hurley held up the two orange starfish as she returned them to their home at the bottom of the ocean. She accented her look with Ray-Ban sunglasses and a significant diamond necklace around her neck. She captioned the sweet images, “Found these magnificent starfish, alive but stranded, on the beach- they’re now happily back at the bottom of the sea.”

The beautiful swimwear is likely from her bikini line, Elizabeth Hurley Beach. She went viral during the lockdown stage of the pandemic for posting bikini shots in the most unlikely places — she had to get creative with her marketing.  “We haven’t been allowed to go on vacation in 14 months… I have a beachwear company and haven’t been on the beach… Hence, we have been selling what we can,” Hurley told Extra. “We’ve been improvising. So, yes, we’ve been on hay bales, we’ve been in the snow, we’ve been in the shower.”

And sure there were plenty of critics who were against her strategy, but she brushes them off, adding, “I think people are mean to women and I don’t think it’s how people should be, so I can’t say I am a fan of those comments, really.” Instead, Hurley is using her kind heart for good, including rescuing starfish that didn’t even know they got a celebrity ride back to the ocean.

Before you go, click here to see celebrity women over 50 whose bikini photos are blowing our minds.