Striding across the plaza at Lincoln Center on a Saturday afternoon, past the bronze Henry Moore figure reclining in the reflecting pool, a man and a woman debated the sheep on the hill. Up ahead, off to their left, a small woolly flock had gathered.

He was sure that they were actual animals, these five grown sheep and one darling lamb, each with its own shepherd in head-to-toe black. She argued the opposite, and was correct: These were life-size puppets, their shepherds puppeteers, and this was a pop-up performance. Under one of those broad-brimmed hats, maneuvering a long-lashed, tan-faced sheep named the Shredder, was the puppeteer Basil Twist.

Yet with theater beginning its cautious tiptoe back from the sterility of the screen to the vitality (or so we hope) of in-person performance, these puppet sheep had a kind of realness that I’ve craved. As they gamboled about a fenced-off oasis of genuine grass that covers the sloping roof of a darkened upscale restaurant, their casual, nameless show was some of the truest theater I’d seen in many months.

Because they were there, and so was I, and there wasn’t a pixel in sight.

Theater, real theater, is an art form that we’re meant to show up for, meeting it in physical space with our physical selves. We take in the sights and scents and sounds as they happen; we note the feel of the air and the ground beneath our feet. Theater is a dialogue between artists and audience that’s also a ritual for the senses — which, after such a surfeit of digital drama, are primed to tingle.

Admittedly, I had fallen in love with Twist’s charming creatures online, streaming his pandemic production of “Titon et l’Aurore,” which he had directed and designed for the Opéra Comique in Paris — a show so resplendent with puppet sheep that some were stacked into towers, and others floated through the sky.

The Shredder and the rest of the gang at Lincoln Center — Splinter, Machete, Bertha, Fang and the baby, Mower — were modeled on their Parisian counterparts, with rattan skeletons and woolen coats made from wigs, whose white curls fluttered in the breeze. 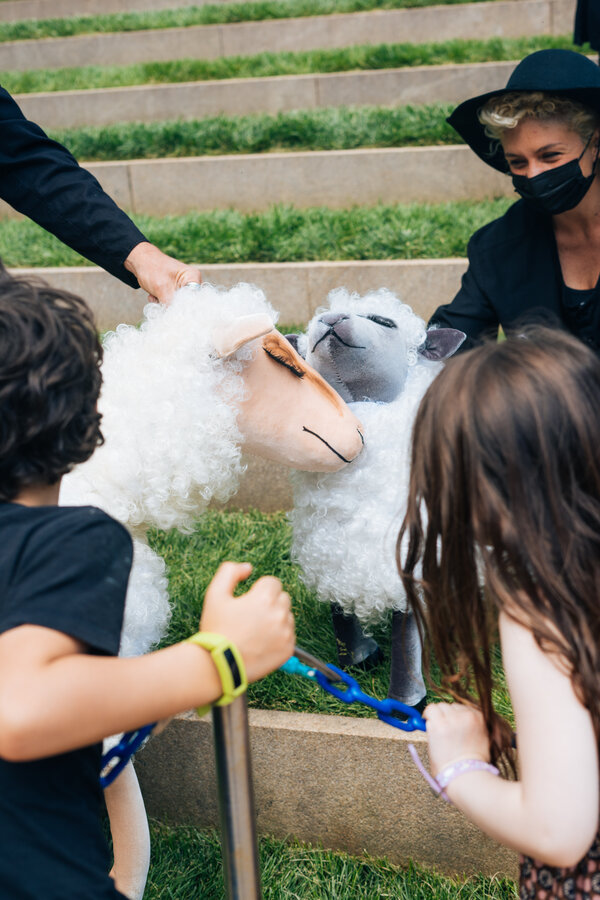 On their patch of pasture, otherwise known as the Illumination Lawn (not to be confused with Mimi Lien’s nearby synthetic lawn installation, “The Green,” which is essentially set design as public art), they were like an apparition reflected in the vast glass front of Lincoln Center Theater.

Toddlers were enchanted, determined to stroke Mower’s face, which the lamb’s playful puppeteer, Juanita Cardenas, warmly allowed. Spying the flock, passing dogs barked, jumped back or, if they were terribly brave, strained close to investigate.

There was no plot to the performance, and barely any choreography, but it was chance-encounter magic nonetheless: puppets made by human hands and operated by artists exchanging energy — and even eye contact — with their audience.

Which didn’t stop some adults who filtered through the plaza from wondering what was going on, and whether there was some deep meaning that eluded them.

“Just a little herd of sheep on the hill, for the sweetness of it,” Twist said afterward, standing at one end of the reflecting pool with the Shredder in his arms.

THE FIRST LIVE SHOW I saw when theater started returning this spring was “Blindness,” which is arguably neither live nor a show. The only actor’s voice is recorded — Juliet Stevenson, whisper-close through our headphones.

But we, the audience, are live: distanced yet gathered nonetheless at the Daryl Roth Theater, off Union Square, to experience a work of art together. The thing that most moved me about it could never have happened on a screen.

I’d wondered since the start of the shutdown how lighting designers would ever use haze again without freaking the audience out, since the nature of haze is to make the air visible, which makes us think about what we’re breathing, which in the past year-plus has been a very scary thing. I’d worried a little about whether it might freak me out.

But there came a point in “Blindness” when the lighting designer, Jessica Hung Han Yun, broke the pitch-blackness with a soft and gorgeous beam of illumination angling through the air. As I gazed at it, I realized that the theater had been filling with haze while we were submerged in darkness, that through our masks we’d already been breathing it.

And so I sat there, headphones clapped to my ears, and felt tears trickle down my cheeks — because it hadn’t unsettled me, because it felt safe and because, wow, had I missed great lighting design.

IT’S SO EASY, gazing into a screen, to lose awareness of your own body. In-person theater doesn’t let that happen — and this early in the industry restart, that is double-edged.

To go to a small show called “Persou” — directed by Ellpetha Tsivicos at the Cell, a performance space in Chelsea — I signed a lengthy Covid liability waiver “on behalf of myself and all of my heirs, executors, administrators, and assigns,” whoever those might be.

Once there, I realized that even masked and fully vaccinated, in a well-ventilated room, I am not wild about the idea of standing close to strangers for a long stretch of time. Also, I will actively resist if you try to get me to dance as part of your show — though that was true even before the pandemic.

I don’t regret going, though. A four-piece band played music from Cyprus and Greece that I could have listened to all night, and we spent a brief but lovely part of the performance in the incense-scented back garden, under the moon and a tall, spreading tree.

And I’m pretty sure I will remember for a long time the stroller-pushing woman who walked by with her little boy as the audience waited outside, preshow, on West 23rd Street. Swearing, she muttered that we were taking up the whole sidewalk, which was a valid gripe. We are out of practice at sharing collective space.

THERE ARE SENSATIONS you don’t realize you miss until you encounter them again. Like the paint-wood-adhesive smell of a freshly made set, which is part of what I loved about “A Dozen Dreams,” the En Garde Arts production at the downtown mall Brookfield Place. It’s a show that can feel, with its lack of actors, pleasingly like a walk-through of an installation.

“You are the actor,” each audience member is told through headphones, at the start of a trek through 12 disparate sets belonging to 12 short plays by women, each of whom speaks her own text on the recording.

Solo or in pairs, we find ourselves in Ellen McLaughlin’s “The First Line,” with its maquette scale and cracked theatricality; in Martyna Majok’s “Pandemic Dreams,” which is eerily and unambiguously a nightmare; in Rehana Lew Mirza’s “The Death of Dreams,” whose color-saturated intensity and interlocking pieces reminded me of the imagery in my own pandemic dreams.

A couple of sets include video of the playwrights speaking their text, and I wish they didn’t. When I see an on-screen performance in an in-person show now, a part of me just shuts down — a reaction to online theater, but probably I have always been like this. In art museums, I look for the signature on a canvas, because to me that’s proof that a human was there. Similarly, I want my theater handmade.

To a gratifying extent, “A Dozen Dreams” provides that. Irina Kruzhilina, who did the visual and environment design, and Jeanette Oi-Suk Yew, who did the lighting, offer us something we haven’t had much of lately. We are bodily immersed in this show, and very, very far from the lonely, make-do experience of streaming theater.

FIVE DAYS after I watched Twist and his band of puppeteers frolic with their sheep, I was sitting under the trees at Lincoln Center, looking out over the reflecting pool. It was early evening, and chilly shadows had crept over most of the plaza. But up at the top of the Illumination Lawn, a slice of sunlight beckoned, and I went toward it.

As I stepped onto the grass, I noticed something curious on the stairs, where the flock had milled about to meet the public: a fuzzy white curl, caught on some blades of green.

This remnant of puppet sheep — surely that’s what it was — filled me with disproportionate joy. Off I paced across the lawn, scanning the ground like Mare of Easttown searching for forensic evidence. The grass was scattered with it: tiny puffs of puppet wool, physical artifacts of a performance that had happened live, in 3-D, in front of an audience that was close enough to touch.

Call me a traditionalist if you like, but no digital trail will ever compete with that.