The One Million Moms clown show is at it again, making a mountain of a tiny, beautiful gay molehill and declaring war on the most unholy entities of the world: Disney. This time, the extremist Christian group is up in arms about a one-second clip in the new Toy Story 4, in which two moms appear drop off their kid at school. In a petition calling parents to protest Disney, the group claims that the representation of same-sex parents leaves viewers “blindsided by this subtle but obvious promotion of the LGBTQ lifestyle.”

Honey, if gay were a lifestyle, Jeff Bezos would have figured out to how to monetize it with two-day shipping. We’re not a lifestyle; we’re people. We have identities, experiences and Fitbits that define who we are and how we live like everyone else. One Million Moms, a division of the American Family Association, is a fundamentalist group that makes the Southern Poverty Law Center’s hate list for its history of staunchly anti-LGBTQ actions. (The organization is also anti-abortion and anti-pornography). Despite its name, the group has just 94,000 Facebook fans and far fewer on other channels, including 3,700 Twitter followers and 2,600 on Instagram. The petition it started against Disney has 13,272 signatures. “There has been a deliberate lack of mentioning this content,” the petition reads. “Therefore, families are blindsided intentionally by your company.”

Let me tell you something, One Million Moms. There is no need to “deliberately mention” content that includes same-sex parents any more than there is a need to deliberately mention straight parents, Latinx parents, a grandma who likes to play bingo on Fridays, a single dad, or a one-eyed robot toy. Because this is real life (minus the one-eyed robot toy, Disney is plainly and simply finally getting with the program and portray real people in all of our beautiful diversity and authenticity.

Disney could opt to show a closeted mom who doesn’t feel safe coming out because she was raised with religious fervor and harbors self-hatred as a result. It could opt to show her overbearing, fragile-ego husband who clips his crusty toenails in the sink or her repressed child who is scarred by growing up in a house where her parents don’t love or respect each other. But then what kind of kid-friendly movie would that be? Two well adjusted, self-assured lesbian moms who love and dote on their adoring child (who is more likely to turn out better than if he had straight parents, according to some studies) sounds much more appropriate for family movie night.

The scene in question — literally one second in length — actually shows a kid with a yellow dress and a purple backpack walking towards an adult (presumably a parent to retrieve their kid) in groovy jeans in the foreground. If anyone should be concerned about anything, it should be about this strange man kneeling on the floor in the school. Maybe he’s not even a parent but an evildoer wanting to cause harm to the child . (*Cue sarcasm*)

While that scene is unfolding centerstage on the big screen, One Million Moms are instead obsessing about something happening way off to the side, nearly out of the shot entirely. In the upper left corner of the screen, there are other adults greeting other children, including what appears to be two women, admiring something a kid — presumably their kid — is enthusiastically showing them. Maybe he made something in school he was particularly fond of, and not one, but two women are proud of his handiwork. Apparently, the same two women are also briefly seen dropping off said child before they return to pick him up later. And they’re smiling. Play the horror music.

From looking at the scene, we don’t know for sure whether the women are both his moms and whether they are, in fact, the “dangerous” lesbians One Million Moms claim they are. For one, the two women appear to be feminine in nature, and we all know that lesbians are big, butch bulldaggers (slang for masculine lesbians) who try to be men, steal women and convert our kids. (*Cue sarcasm again*) If One Million Moms is really concerned about child safety, there are at least half a dozen other potentially more perilous things happening in that scene, including a fire alarm which looks close enough to the ground for a kid to pull and create a deadly stampede. There’s also got to be at least one kid with their shoelaces untied.

It’s a funny thing to assume two women are lesbians, because it makes me think whoever did so may be gay. I used to think all females who leaned in to whisper to one another or who laughed at one another’s jokes were lesbians. Laverne and Shirley, Thelma and Louise, Ellen and Portia. Oh, wait. Maybe they are all lesbians. It’s the same reason I immediately noticed the two moms in via clips on the scene online. (We haven’t seen the whole movie yet as a family). 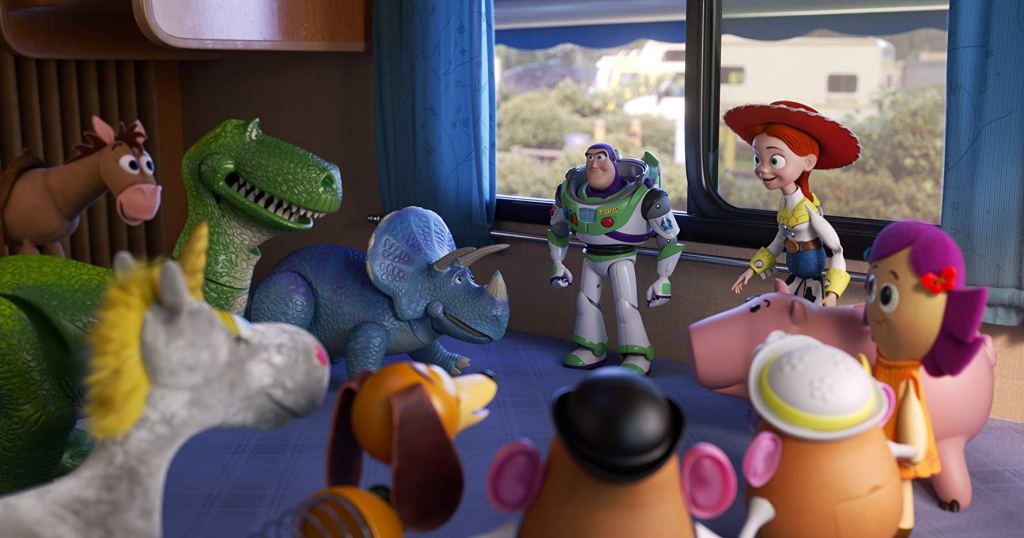 But most people probably won’t notice. The vast majority of people see my wife and I with our son and assume we must be straight, and that one of us is the aunt or grandma or nanny because they just don’t read people as queer. That isn’t on their radar. The fact that One Million Moms is so tuned into queerness makes me wonder if maybe they aren’t all lesbians, per my theory. If they are, no judgment. I hereby invite them to join the club. It’s not as fun as the Mickey Mouse Club, but we have casserole. Just bring your own cargo shorts. We don’t have enough to go around.

The irony in One Million Moms’ controversial flurry is that no one would have noticed the flash of inclusion nestled in the background had the group refrained from blasting about it on every channel available to them. Now everybody is looking for the lesbians in Toy Story 4, and Buzz Lightyear is thinking about adopting gender-neutral pronouns. (It hasn’t happened yet. But we’re hoping Disney is headed that way.)

The real sin is that Hollywood is allowed to make four versions of the same concept, milking all quality out of what was originally a perfectly good movie, just for the sake of squeezing every last penny in ancillary merchandise. My only hope is that Toy Story 5 has armies of queer characters, people of color, folks with different abilities, immigrants, feminists and every color of the rainbow — because there are way more than one million of us, and we like Disney movies too.