From a cunning criminal in Jett to the heartbreaking character of Jamie in Haunting of Bly Manor, Carla Gugino has played her fair share of multifaceted badass women. Her role as Alba Fontana in the upcoming Peacock original Leopard Skin is no different.

In the new show, one that combines action with plenty of drama and romance, Gugino plays Alba, a documentarian who has undergone so much trauma and heartbreak that she’s slowly had to piece herself back together. As she begins to find herself, Alba and her roommate/ex-husband’s wife Batty (Gaite Jansen) receive unexpected visitors: a group of criminals (played by Nora Arnezeder, Gentry White, Margot Bingham), who are seeking shelter after a heist.

Talking to SheKnows about what makes this show special, Gugino calls the series “a cinematic novel.” She explains, “it is a story within a story within a story and so you end up in a place where you really don’t know what’s going to happen.” Couldn’t have said it better myself – just when you think you know where the show is going, think again.

“It gives the illusion that it may just be a straight up action thriller and what we come to realize is that what is happening in the house is much more complex and unusual than even the criminals breaking in, and now they are subject to that as well,” Gugino says.

Most of all, this is a show filled with complicated, multifaceted female characters and we get to see the backstories and motivations behind each and every one of them. If we’re introduced to Alba as a rich home owner with impeccable style in the beginning (peek her monochromatic green look above), we later discover she’s lost everything – including herself. “They are filled with dichotomies,” Gugino says of the main characters in the show.

“It’s been an interesting trajectory where women had to be in a certain box and then there was a freedom to be like, ‘Oh, now they can be strong and powerful, and cool and badass,’” Gugino says. “Then there’s also the extension of ‘Oh, but also why don’t we allow them to be flawed and confused and make mistakes and also be strong and amazing?’” she notes, adding that these complexities “are part and parcel” and “the next step” when it comes to writing. 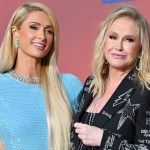 
Following Kathy Hilton's Unhelpful Advice on Getting Pregnant, Paris Hilton Is Setting the Record Straight on Her IVF Journey

Gugino also points out that the female characters in the show have been allowed a certain “darkness” that was previously only reserved for male characters. For her,, TV shows and movies tend to always “wrap up with a woman and make sure we know she’s good.” Leopard Skin, refuses to do that.

“I’m always interested in pieces that ask questions, as opposed to giving answers,” she says, noting that telling these complex stories is her own way to “help the world.”

As for what the actress has learned from playing Alba, Gugino says she admires her character’s “fierceness and commitment to rediscovering who she is and releasing who she might have thought she was.” Perhaps serving as inspiration to all of us, Alba takes a good hard look at herself in times of trouble, rather than letting herself be distracted and passively working through her issues.

“She has a certain kind of scientific interest in following herself through and seeing where that’s going to take her,” Gugino explains, “and that’s scary.” Much like the Selena Gomez song lyric, Gugino states, “We kind of have to get lost to be found.”

Summarizing the show in her own words, Gugino says, “it’s not afraid of going to the dark places, but it ultimately has a supreme belief and humanity.” Leopard Skin, which airs on Peacock on Nov 17, also stars Jeffrey Dean Morgan, Philip Winchester, Amelia Eve, and Ana de la Reguera. It’s a bingeworthy treat and, above all else, prepare yourself to expect the unexpected.

Before you go, click here to see the best TV shows you should be watching right now.