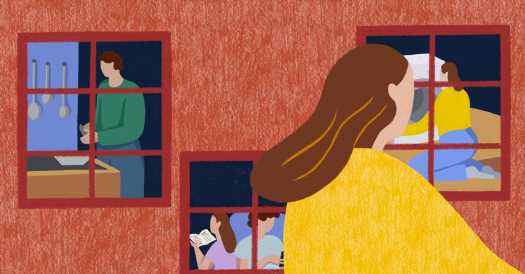 My future ex-husband and I thought our post-separation, pre-divorce living arrangement — together, in the same house, with our kids — was temporary, so we didn’t think to make rules.

When we had agreed to split we didn’t know what might come next, but we did know we weren’t modeling for our kids what a good marriage should look like. With our shared desire to spend as much time as possible with our teenagers before they left home, we wondered if our lack of fiery conflict could pay off in an unexpected way. Maybe we could model what a good partnership looked like.

I still did the laundry and folded the clothes because it’s the one thing I’ve done throughout my life that gives me a sense of mindless, tangible completion. He continued to make most of the meals, a shift in labor that happened after I tearfully exploded for what felt like the hundredth time, trying to explain that the person who had the palate of a 5-year-old, hated cooking, and would never learn how, because there were other things I wanted to do with my life, was not the person who should be cooking for our children. Especially given that he was an excellent cook.

I continued to pay all the bills from our joint account and we still pooled the majority of our money. I kept him (and our children) as a beneficiary on all my accounts, policies and benefits. I have no intention of leaving him high and dry should anything happen to me. That is not how our marriage worked. He allowed me to work as hard as I could, and I encouraged him to pursue a job that would make him happy, no matter how much it paid.

I stopped inserting myself into or facilitating his communication with his family. In general, I took myself out of the Head of Communications role as well as Chief Birthday Present Buyer and Happy Anniversary Caller and Human Walking Reminder Lady. It felt as good as it sounds.

We went to school events, parties and other gatherings together. We saw our friends separately, but we had always done that. We had never been a couple nor a family who always did everything together all the time, so in that respect not much changed.

I stopped going camping with the family. I didn’t hate camping, but I didn’t love it enough to keep going when opting out and having a weekend to myself was an option. One of our closest friends, Dabbs, started going in my place. Whenever they’re all on camping trips together, I think about how other campers probably assume they’re a double-dad family or, to my endless delight, a Double Dabbs family.

The summer after we announced our divorce, I glanced down at his iPad on the kitchen counter when an email came up on his locked screen. He was at work. The email was from a woman I didn’t know. The first few lines that were visible said that, yes, she actually might take that golf class with him and my son.

What in the hell is this.

We texted back and forth in a delicate flurry. He said she was just a friend and of course he would have told me if anything was going on. We agreed to this as our first rule: If anything happens dating-wise, there needs to be a conversation. We agreed that that would probably be the beginning of the end of this little living arrangement (and this is still our assumption).

A couple of months later, he was cleaning up after having ripped up all the carpet in our former guest room upstairs, now my new bedroom. It was a surprise birthday present for me, getting the floor prepped and ready to paint. I was sitting on the floor, scrolling through my phone as it charged, and realized that, per our agreement, I should tell him I had joined Tinder that afternoon. So I did. “OK” was the entirety of his reaction.

I never ended up going on a single real date, so I never told him anything that happened while I was on any dating apps. The whole experience was so weird and theoretical and stupid. But when he read my manuscript for an essay collection about divorce, one of the things he was most upset by was my dating app story. He said, “We had agreed we would tell each other if we were dating anyone.” And I reminded him that almost being scammed by an anonymous stranger is not dating. We agreed to disagree.

As our living situation continues, a curious shift has occurred: We ask about each other’s days and share more now than we did before. For the most part we exhibit a level of manners and appreciation more associated with longtime friendship than with longtime marriage. Sometimes all four of us will watch a show or a movie after dinner, but more often than not we are scattered to our various shows, work, books and FaceTimes with friends. We are a house of four relatively self-reliant people, and there is a communal, roommate-ish feeling to so much of our lives now.

On the one hand I’m grateful for that independence, each of us with room to roam inside our own home. But I’d be lying if I didn’t say I sometimes worry about how this mirrors my own teenage years in a divorced household, especially when we each grab dinner and retreat to our own corners. I loved having the independence to do whatever I wanted, but sometimes too much freedom at that age makes you wonder if anyone cares about what you’re doing at all. Very little has changed for our kids, though, other than they get to see their parents learning to become real friends.

Our approach reminds me a little of a realization I had the day after getting laid off from a job that had become a cornerstone of my identity. I had worked so hard, I had given my life over to it, I had left my small children during dinners and weekends because of that job. But what struck me the morning after I was laid off was this singular thought: “Maybe I could just do what I’m good at now instead of everything I was made to feel bad about.”

Our current arrangement, our prelude to a divorce, is like that. We are just doing what we are good at and not doing the things we were bad at (mostly).

From the time we’re teenagers, navigating our first romantic relationships, we dread hearing the phrase “we’re just friends.” Our culture reinforces the idea that friendship is a lower, less desirable, and less meaningful form of relationship than marriage. But, depending on the marriage and the two people involved, there is enormous potential to demonstrate to our friends, families, and especially our children that sometimes marriages can do more than dissolve. They have the power to evolve.