After almost 30 years, the Sanderson sisters are back and delivering delicious spells and fun in Hocus Pocus 2. The original 1993 film did pretty well at the box office, but it gained momentum over the years as a Halloween classic, paving the way for a sequel, thanks to the lovable and strong characters.

Star Bette Midler understands why so many moviegoers gravitate toward the three witches, also played by Kathy Najimy and Sarah Jessica Parker. “I think these three characters are really, in a strange and odd way, they’re really quite positive for women,” she said at a recent press conference for the film, via AV Club. Part of that strength comes through their sense of humor, according to the 76-year-old actress. “First of all, they’re very funny, which women are not allowed to be, are not supposed to be,” Midler explained. “It’s a very broad range of emotions that they live through.”

Along with that comes the crucial lesson that “a bond of friendship and sisterhood is really, really important” to the Sandersons. That message comes across loudly and clearly in the second film as the audience gets to see the three sisters have “very little hesitation in [their] ideas,” according to Najimy. “We’re gonna get it done, even if it’s eat children.” The lack of “second-guessing” is also an important overall theme that Midler thinks women can take with them after the movie is over.

“We’re very decisive. We’re a very decisive group, which goes also goes to show that women can be decisive,” she said. It’s a great lesson from a film that has carried several generations through the Halloween season. There’s a reason the Sanderson sisters have endured over the decades, and they are here to offer Gen Z a few empowered lessons to carry them forward.

Before you go, click here to see all the Disney+ originals you’ll want to watch with your kids. 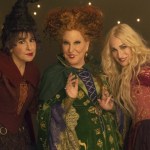