The lovers are soaring through gold. In Giambattista Tiepolo’s fresco “Perseus and Andromeda,” which was painted around 1730-31 and luxuriated across the ceiling of a Milanese palazzo, a winged horse spirits away the boyish Perseus, a heroic son of Jupiter with a mop of golden hair, who has just driven his lance into a ravenous sea monster. He has rescued the chained Andromeda, and now they are flying; she’s nude but for the broken manacles still dangling from her wrists and ankles, and her skin is a blotchy peach tone, despite her heritage as princess of Aethiopia.

Beneath them, the impaled monster wails from its horrid maw. Above, Jupiter looks benevolently upon Andromeda’s suppliant parents. Cupids flutter, nereids gawk. And the clouds are as golden as sunshine — or at least I suppose they were, for now the final fresco endures only in black-and-white photographs. It was destroyed in August 1943, along with most of the palazzo, when Allied bombs pummeled Italy’s industrial capital.

Tiepolo was still a young artist in the early 1730s, a Venetian taking on his first big job outside his hometown, and so before undertaking the frescos he made a number of modelli, or painted sketches, for his patron’s approval. Three are reassembled in the Frick Collection’s aching exhibition “Tiepolo in Milan: The Lost Frescoes of Palazzo Archinto,” on view through next Sunday. 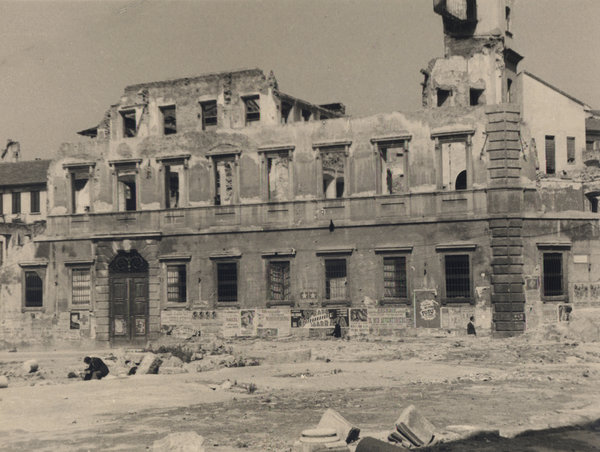 The largest modello, for the palazzo’s most prominent fresco, is “Triumph of the Arts and Sciences,” in which the impertinent figure of Painting holds her brush aloft like a torch. (It’s on loan here from Portugal’s national gallery.) But the gold-steeped modello for “Perseus and Andromeda,” which Henry Clay Frick purchased in 1916, is the most moving. Tiepolo may have chosen these lovers to commemorate an Archinto family wedding, and he elected not to emphasize Perseus’ heroics, but rather the couple’s first moments together. Their marriage would be written in the sky twice over: first by the gods, who turned them into constellations, and then by the artist, in a fresco meant to endure just as long.

In this show you’ll find not only Tiepolo’s preparatory paintings and drawings, but also vintage photographs of the completed frescoes, which were each embedded in involute stucco molds. A photograph of “Perseus and Andromeda” from the turn of the 20th century affirms that Tiepolo hewed closely to the sketch on view at the Frick — the lovers afloat, the horse rearing through the atmosphere and just a few additional minor figures in the clouds. A later photograph reveals that the palazzo’s owners added an electric light to the ceiling, bolted just to the right of Andromeda’s head. And there are postwar photos documenting the bombed-out palazzo, each as blunt and meticulous as a Rossellini film.

The Frick, though ever discreet, has lately made some subtle deployments of older art for present torments. Last year’s smashing “Canova’s George Washington” cast an 18th-century Italian eye on American presidential demeanors — and “Tiepolo in Milan,” in the same restrained way, acts as a somber prequel to this decade’s accelerated destruction of cultural heritage, most atrociously in Syria and Iraq. There the past has been blasted with mortars launched from the ground, but in 1943 destruction came from the air, as bombs rained down on Tiepolo’s star-crossed couple. The gold sky turns black. We hurl thunderbolts with a fury once reserved for gods; we unleash hellfire, and reduce the eternal lovers to powder.

Tiepolo in Milan: The Lost Frescoes of Palazzo Archinto

Jason Farago is an art critic for The Times. He reviews exhibitions in New York and abroad, with a focus on global approaches to art history. Previously he edited Even, an art magazine he co-founded. In 2017 he was awarded the inaugural Rabkin Prize for art criticism. @jsf