Anne Beatts, who wrote for “Saturday Night Live” from its beginning in 1975 until 1980, a raucous, innovative period that established the show as a central feature of the American cultural landscape, died on Wednesday at her home in West Hollywood, Calif. She was 74.

Her family announced the death in a statement. The cause was not specified.

Ms. Beatts had written for National Lampoon and other outlets when the producer Lorne Michaels signed her for a new late-night sketch show to be aired live on NBC on Saturdays.

“I was lucky that when Lorne Michaels came looking for women comedy writers there weren’t too many in New York at the time,” she told The Orange County Register in 2013. “I was at the top of a very short list.”

“That was probably our biggest hit,” Ms. Beatts told The Register. 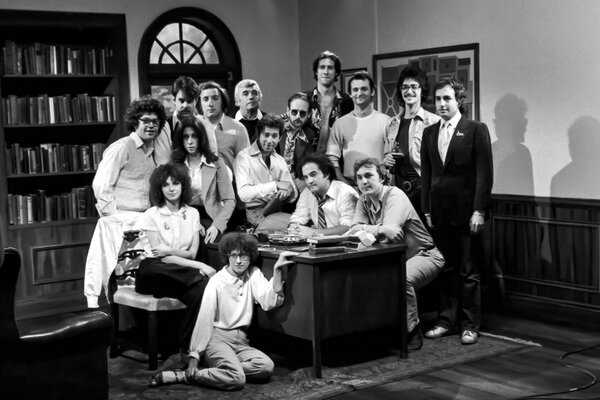 Ms. Shuster, in a phone interview, said that she and Ms. Beatts had made a point of writing material for the women in the “S.N.L.” troupe. And, she said, Ms. Beatts had no problem holding her own in the largely male “S.N.L.” writers’ room.

“Because she had worked at the Lampoon with a lot of guys, she wasn’t a shrinking violent,” Ms. Shuster said.

Alan Zweibel, who was a part of that room, remembered a humorist with an edge.

“Her words were like weapons — really sharp, really satirical,” he said. “Not only was there a wit; there was a little bit of anger there. But it landed.”

Ms. Beatts often wrote the parodies of TV commercials that the show used at the time, and sometimes she appeared in them. Mr. Zweibel especially remembered an absurdly overachieving housewife she played in one fake ad — the woman’s secret was a product called Speed.

“Anne Beatts’s writing was very personal and specific,” she said by email. “She brought things to the fore that we all knew about but weren’t depicted or defined. For instance, the Nerds. That was so Anne in its detail. The fact that Lisa Loopner ate egg salad sandwiches. Her writing was very direct, muscular and dark at times, and who doesn’t love that?”

Having explored nerdiness with Lisa and Todd, Ms. Beatts drew from that well again after leaving “S.N.L.” in 1980. In 1982 she created “Square Pegs,” a CBS comedy series that lasted only 20 episodes but anticipated the trend of TV shows about the pressures and pitfalls of high school as experienced by the outcast crowd. It centered on two awkward girls, Patty and Lauren, who were constantly under siege by the cool kids.

Patty was played by Sarah Jessica Parker, then largely unknown. Ms. Beatts said the character was based on herself and her experiences at Somers Central High School in the Westchester County town of Somers, N.Y. She intended the show to be a sort of pep talk for students going through similar high school hell.

“I just wanted to say to the Laurens and the Pattys and others that no matter what they’re suffering now, they may be glad about it later,” Ms. Beatts told The New York Times in 1983. “Because most of the bright, successful, happy people I know were pretty miserable in high school.”

Anne Patricia Beatts was born on Feb. 25, 1947, in Buffalo. Her parents, Pat and Sheila Beatts, were both educators. She graduated from McGill University in Montreal, where she worked on the campus newspaper, The McGill Daily.

“I had always wanted to be a writer,” she told The Gazette of Montreal in 2011, “but I was afraid to say it before I started working at The Daily.”

After graduating, she worked in Toronto for a time, then ended up in New York. She acknowledged that the easiest way for a woman to be noticed in the humor world at the time was to be dating a guy who was part of it. For her, that was Michel Choquette, a founding figure at the Lampoon, which was started in 1970; she tagged along with him to strategy sessions.

“Nobody wanted me there, but nobody wanted to say, ‘Make her stay home,’” she told The Contra Costa Times in California in 2004, “so I went to the editorial meetings in some of the worst restaurants in New York City.” She added: “Everybody would talk and throw out ideas, and at the end they’d ask who had this and who had that, and I’d find myself raising my hand. So I sort of wormed myself in.”

A few years later, she was involved with Michael O’Donoghue, an original “S.N.L.” writer.

“Lorne had this idea of couples, like going on board the ark,” she said. “Once you were on you couldn’t get off.”

She almost turned down Mr. Michaels’s offer because she was working on a book.

Her time at “S.N.L.,” she said, was exhilarating but difficult.

“It was a combination of summer camp and concentration camp,” she told The Miami Herald in 1982.

After “Square Pegs,” Ms. Beatts, who settled on the West Coast, wrote for other shows and occasionally produced, including episodes of “A Different World” in the 1980s. At her death she was a lecturer at Chapman University in Orange County, Calif.

She is survived by a daughter, Jaylene Beatts; a sister, Barbara; and a brother, Murray.

Ms. Beatts completed that book she had been working on when Mr. Michaels called. Published in 1976, it was a compilation she edited with Deanne Stillman and was called “Titters: The First Collection of Humor by Women.” She was a longtime advocate of giving women a bigger voice in comedy, and of purging the sexism in that world.

In 1978 The New York Times ran an item that mistakenly referred to Ms. Beatts as a former editor of National Lampoon. The magazine’s editors wrote in to correct the record.

“While for some time a listed and valuable contributor, she never served in an editorial capacity,” they wrote. “Since, elsewhere and frequently, Ms. Beatts has been at pains to condemn the National Lampoon’s conscious and unconscious sexism in the area of humor, it seems unlikely that she would want such an error to spoil her otherwise formidable record.”