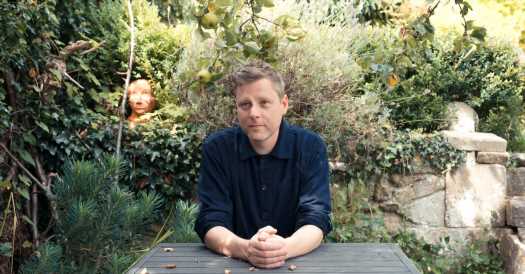 Max Porter is a writer who’s spent a long time thinking about death. “I would say I’m a death-obsessed, or a mortality-preoccupied, person,” he said recently in a video interview from his home in Bath, England.

His 2015 debut, “Grief Is the Thing With Feathers,” follows the passing of an unnamed mother survived by her husband, a college professor, and two young sons. As the family mourns, an enormous crow moves into the family home to guide and antagonize them. In “Lanny,” his Booker Prize-listed second book, a child goes missing in the English countryside, setting off a paranoid manhunt.

For his latest novel, “The Death of Francis Bacon,” set to be released by Strange Light on Sept. 14 in the United States, Porter has turned his attention to an artist who shared his morbid fascination.

Bacon’s artwork is characterized by images of screaming faces, grotesquely contorted bodies and the crucifixion. One of his most famous works, “Triptych May-June 1973,” depicts a recently deceased lover, George Dyer, dying on the toilet.

Porter explained that the dark themes of his writing were also influenced by tragedy. “I would locate that probably in my childhood,” he said, “with the death of a parent.” Porter’s father died when Porter was 6, he added.

In his teenage years, Porter said, he was drawn to bleak subjects — “death, the bomb, the body and the Holocaust” — and it is little wonder he was attracted to Bacon’s paintings, as well. At 17, he said, he painted several Bacon “knockoffs” for a high school art class.

The book Porter has produced, 20 years later, isn’t an art history lesson or a chronology of Bacon’s life. Instead, “The Death of Francis Bacon” is an experimental reimagining of the short period before the painter’s death in Madrid in 1992.

The novel is split into seven chapters, which Porter described as “written paintings.” In each of them, he envisions Bacon’s thoughts as he lies on his deathbed, haunted by his legacy as his mind fragments.

In April 1992, Bacon traveled to Spain from London, aged 82 and suffering from asthma. His doctor warned him not to go, but Bacon wanted to renew a relationship with his estranged lover José Capelo, a banker whom he had painted several times. “It was a sort of last gamble,” Michael Peppiatt, an art historian, biographer and friend of Bacon, said in a telephone interview. “A desperate bid to rekindle love.”

Shortly after arriving, the artist was hospitalized at the Clínica Ruber, a private clinic run by nuns. Porter blends invented dialogue between Bacon and his nurse, Sister Mercedes, with a stream-of-consciousness monologue from the painter himself, littered with references to figures from his life. There’s no obvious plot or exposition, and the references are never explained.

Porter said he would never write a conventional novel, with character back stories, or a linear narrative. “Other people do that much better than me,” he said, “and that’s not the kind of book I want to write.”

Because of this ambiguity, he never thought “Grief Is the Thing With Feathers” would be published, he said. When he wrote it, Porter was working full time as an editorial director at Granta, a publishing house. It was intended as an experiment: “a private investigation into form, poetry and grief,” Porter explained.

A tender study of loss told from the perspectives of its mourning characters, “Grief Is the Thing With Feathers” also features passages from the consciousness of an enormous, cawing bird. At just over 100 pages, it wasn’t an obvious international best seller.

She stepped off the train in tears, she said, called Porter and told him, “I really want to publish this.”

The book came out in September 2015 and won the Dylan Thomas Prize for young writers the next year. Since then, “Grief Is the Thing With Feathers” has been translated into 27 languages and adapted for the stage by the Irish playwright Enda Walsh. The theatrical production, starring Cillian Murphy, premiered in Galway, Ireland, in 2018, before playing in Dublin, in London and at St. Anne’s Warehouse in Brooklyn.

In an email exchange, Murphy described the development of the stage production as a collaborative effort. “Max and Enda had a particular strong understanding, which informed Enda’s adaptation of the book,” he said. “And Max was extremely generous and unprecious with his work.”

The adaptation retained much of Porter’s signature prose style, which Murphy said was well suited to the stage. “The words are absolutely beautiful to say,” he said. “Like all good writing, the more you say them, the more they reveal.”

Porter’s second release, “Lanny,” shares much with Porter’s debut. Both novels are concerned with loss, told through multiple perspectives of a single family, and feature an ageless, omnipotent observing presence. This time, instead of a crow, we’re introduced to Dead Papa Toothwort, a mythical woodland creature that lurks in the shadows, watching over the drama.

Like the staccato rhythm of the chapters featuring the crow, Dead Papa Toothwort’s voice is also frantic, with his narration interrupted by wayward digressions. These interruptions are expressed through irregular typesetting, with words weaving and meandering across the page.

These chaotic sections echo the content of Porter’s notebooks, where the ideas for his novels are formed. Each book is filled with scrawled room layouts, doodled characters, scribbled sentences and haphazard blocks of text. While developing “The Death of Francis Bacon,” he said, he sketched away in his notebooks while studying reproductions of the painter’s work.

“For three months,” he said, “I did nothing but look at Bacon pictures every day.”

That was last year, during England’s first coronavirus lockdown. It was an intense time to be locked away in his study, Porter said, writing and thinking about death under the shadow of the pandemic. He welcomed the frequent disturbances from his two young sons, he added. “I want life flowing through this room,” he said. “I don’t want a closed-off box.”

Amid the book’s gloom, Porter found some room for levity in the darkness, breaking up the mood with playful turns of phrase: Bacon refers to himself as “piggy” throughout, and has a “little linen hill belly”; someone’s chin is “stuck on like a dumpling.”

While writing “The Death of Francis Bacon,” Porter said, he “never wanted to take myself, or it, too seriously.” Just because something’s bleak, he added, it doesn’t have to be depressing. “The absurdity of modern life is worth laughing at,” he said, “because what else are we going to do?”