After more than a year of pandemic-related crises, Manuel Antonio Morán wanted to give a gift to New York. He envisioned something lighthearted and uplifting, but also thought-provoking and as varied as the city itself. The answer? Puppets.

But there’s nothing here to prompt sneers or eye rolling. The International Puppet Fringe Festival NYC, which arrives this week with over 50 shows and events, more than a dozen short films and five accompanying exhibitions, including “Puppets of New York” at the Museum of the City of New York, is far from a kiddie celebration.

“The wrong perception in the United States is that puppetry is just for children or to be used for education,” Morán, the festival’s artistic director, said in an interview at the Clemente Soto Vélez Cultural and Educational Center, the programming’s Lower East Side hub. “That’s something I’m fighting every single day.”

This festival, which is offering 60 percent of its performances free (tickets to the rest are $15 each), may help convince the doubters. Although Morán founded Puppet Fringe NYC as a biennial in 2018 — Covid-19 prevented its 2020 edition — this version is almost twice the size of the original and essentially a rebirth. Beginning on Wednesday with the first Puppet Week NYC, which comprises five days of live events, the festival continues through Aug. 31, mostly in virtual form, with shows from countries including India, Israel, Argentina, Spain, South Korea and the Ivory Coast.

It “represents the whole immigrant ethos of the Lower East Side, channeled through the lens of these other citizens that are puppets,” said Libertad O. Guerra, the executive director of the Clemente. The center is producing Puppet Fringe NYC with Teatro SEA, the downtown Latino theater Morán started in 1985, and Morán’s own agency, Grupo Morán.

This year’s festival will also have workshops in puppet construction, four of them for adults. And for those whose tastes run to the politically barbed or the comically risqué, two grown-ups-only puppet evenings are planned, one of them called the “Bawdy, Naughty Puppet Cabaret/Puppet Slam.”

“They’re including elements of burlesque,” Morán said of the slam, to be presented on Saturday by the Puppetry Guild of Greater New York. “There might be a little bit of skin,” he added with a laugh. 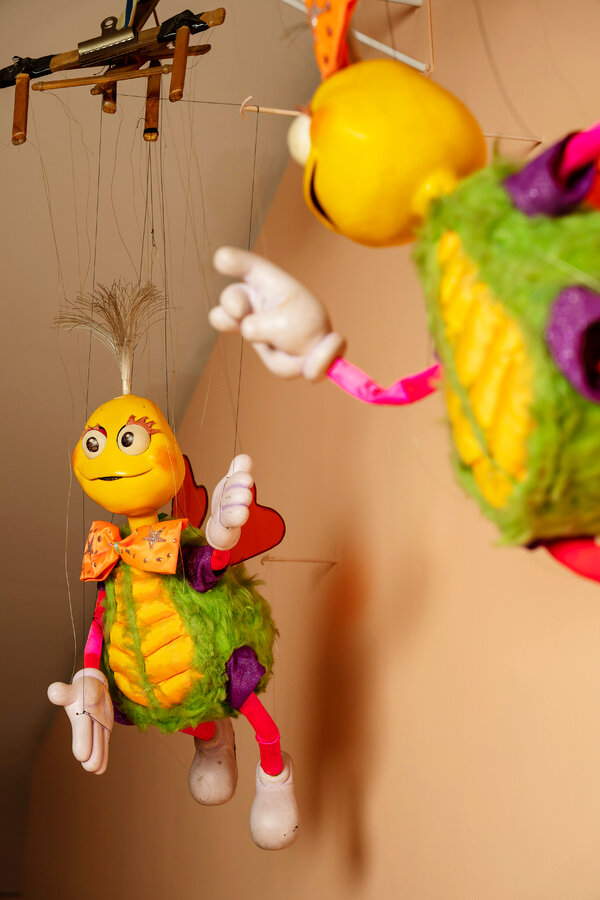 But perhaps this festival’s most novel element is its partnership with the Museum of the City of New York, which will open a 2,500-square-foot exhibition, “Puppets of New York,” with a sold-out celebration on Thursday evening. The show, which runs until early April at the uptown Manhattan museum, features photographs, videos, films and sets, as well as more than 60 puppets. They range from cardboard finger models designed by Penny Jones to José A. López Alemán’s 12-foot-tall Titanya, the fairy queen from “Sueño,” Teatro SEA’s Afro-Caribbean version of “A Midsummer Night’s Dream.”

“The main argument of the show uptown is that the history of puppetry in New York City mirrors the demographics of the city,” said Monxo López, the Andrew W. Mellon Foundation fellow who curated “Puppets of New York.” And, he noted, “many different puppeteers that reflect that diversity have not been as visible as others. It was important to tell that story of diversity, of visibility, of inclusiveness, in a way that also showed joy and possibility.”

To that end, the exhibition includes not only designs by famous masters like Jim Henson and Ralph Lee, but also work by artists like the Manteo family, who brought complex metal Sicilian marionettes when they immigrated to New York a century ago, and Derek Fordjour and Nick Lehane, whose 2020 puppet production, “Fly Away,” featured a nameless young Black man.

“My strategy was that each object had to tell as many stories as possible,” said López, who also collaborated with the author and curator Leslee Asch to organize “Puppets of New York: Downtown at the Clemente,” a complementary exhibition on view through Sept. 30. It joins three other art shows that will be there through August: “Teatro SEA’s International Collaborations”; “Murals of Puppetry Around the World,” featuring Alfredo Hernández’s paintings; and “Vince Anthony’s Legacy,” which celebrates the retired founder of the Center for Puppetry Arts in Atlanta, to whom the festival is dedicated.

The exhibitions reveal a synergy with the festival’s live performances, which will mostly be presented outdoors. (All in-person events require registration and face masks.) Chinese Theater Works, which will deliver puppet dragons and the Chinese judge of the dead to the Clemente’s plaza over four nights in “The Triple Zhongkui Pageant,” will be represented by shadow puppets at the Museum of the City of New York. Also at both those locations will be Lamb Chop, perhaps the most memorable — and feistiest — sock puppet of all time, who appeared on children’s television for 40 years with her ventriloquist co-star, Shari Lewis.

“She’s the Velveteen Rabbit of puppets,” said Lewis’s daughter, Mallory Lewis, referring to Margery Williams’s children’s classic about a stuffed animal that becomes real. On Wednesday evening, Mallory Lewis and Lamb Chop will perform “The Shari Lewis Legacy Show,” an interactive production featuring a new, pandemic-related ending. “It’s a tribute to the first responders,” she said in a phone interview.

Other family-friendly performances will take place all weekend. Bruce Cannon, artistic director of the Swedish Cottage Marionette Theater in Central Park, contributes his talents to the City Parks Foundation’s jazzy production of “Little Red’s Hood,” to be performed in both English (Saturday) and Spanish (Sunday).

Besides this fairy tale, in which the Wolf stalks Little Red through Manhattan, Cannon will present his own “Harlem River Drive,” a one-man homage, on Sunday.

“It explores how Harlem became Harlem,” he said in a phone interview. While touching on serious topics like racism and the Depression, it also offers joyful music and multiple kinds of puppets, all operated by Cannon. They usually include a marionette inspired by Diana Ross — absent from the festival performance because it’s in “Puppets of New York” — and two of Michael Jackson. (When was the last time you saw a moonwalking marionette?)

Deborah Hunt, a New Zealander living in Puerto Rico, will also examine a community’s evolution in three performances of “La Macanuda,” whose title, she said in a phone conversation, means “a large, friendly being.” Hunt, whose work appears in the Teatro SEA exhibition, portrays the character in a puppet that encases her entire body. Accompanied by cutouts, scrolls and a smaller puppet, she enacts a wordless tale — essentially a statement supporting immigrants — in which La Macanuda rescues the victims of a city-destroying ogre. “She’s a kindly departure for me,” said Hunt, whose work often tends toward the macabre.

The Clemente’s own neighborhood stars in nightly performances of “Los Grises/The Gray Ones,” Morán’s music-filled show about the community’s elders, and Saturday and Sunday in “Once Upon a Time in the Lower East Side,” which the center commissioned from the Junktown Duende collective, a troupe that creates puppets from recycled materials.

Its production is “centered around a tenement where waves of immigrants settled,” said Adam Ende, a member of Junktown Duende. And it’s “specifically about the history of immigrant puppetry.”

While the show portrays gentrification and police brutality, it also illustrates the transformation of a blighted space into a community garden. And like Puppet Fringe NYC, it’s a testament to strength amid hard times. “The struggle continues,” Ende said. “And we’re celebrating together, endlessly.”