If you’ve seen The Wolf of Wall Street, The Departed and Goodfellas, then you already know director Martin Scorsese is a master at unleashing kinetic energy in which anti-heroes spin mercilessly and wildly out of control. His latest much-anticipated mob epic, The Irishman, is … not that movie. Instead of flash and brash, we get an effectively moving portrait focusing on the emotional toll of being atop the mob underworld. And, at 209 minutes, it spans most of the 20th century. This bears repeating: 209 minutes — which, in Millennial movie terms, makes it 14 minutes longer than Titanic. Too long? Heck, yes. About 30 minutes of the dense union negotiations could have been scuttled. Should you see it anyway when it’s released November 1, three weeks ahead of its Netflix stream date? I just caught the first screening and the answer is absolutely. Here are five reasons why.

1. The Holy Trinity of Acting
Robert De Niro. Al Pacino. Joe Pesci. To paraphrase Randy Jackson when he used to judge American Idol back in the day, we’d pay money just to see any of these legendary Oscar winners say the phone book. In The Irishman, they convene for the first time in deeply felt performances. De Niro is the titular character, a World War II-vet-turned-Teamster-driver named Frank Sheeran that ends up as a middle man between mafia don Russell Bufalino (Pesci) and the hot-headed-but-lovable union boss Jimmy Hoffa (Pacino). The film is told from Sheeran’s point of view; he matter-of-factly narrates the story from his perch in an elderly care center. However, it’s Pacino that lights up the screen, bringing some of that impassioned barnstorming to the role. I’m just getting warmed up! Jesse Plemons, Anna Paquin, Bobby Cannavale, Harvey Keitel, Sebastian Maniscalo and Ray Romano costar. 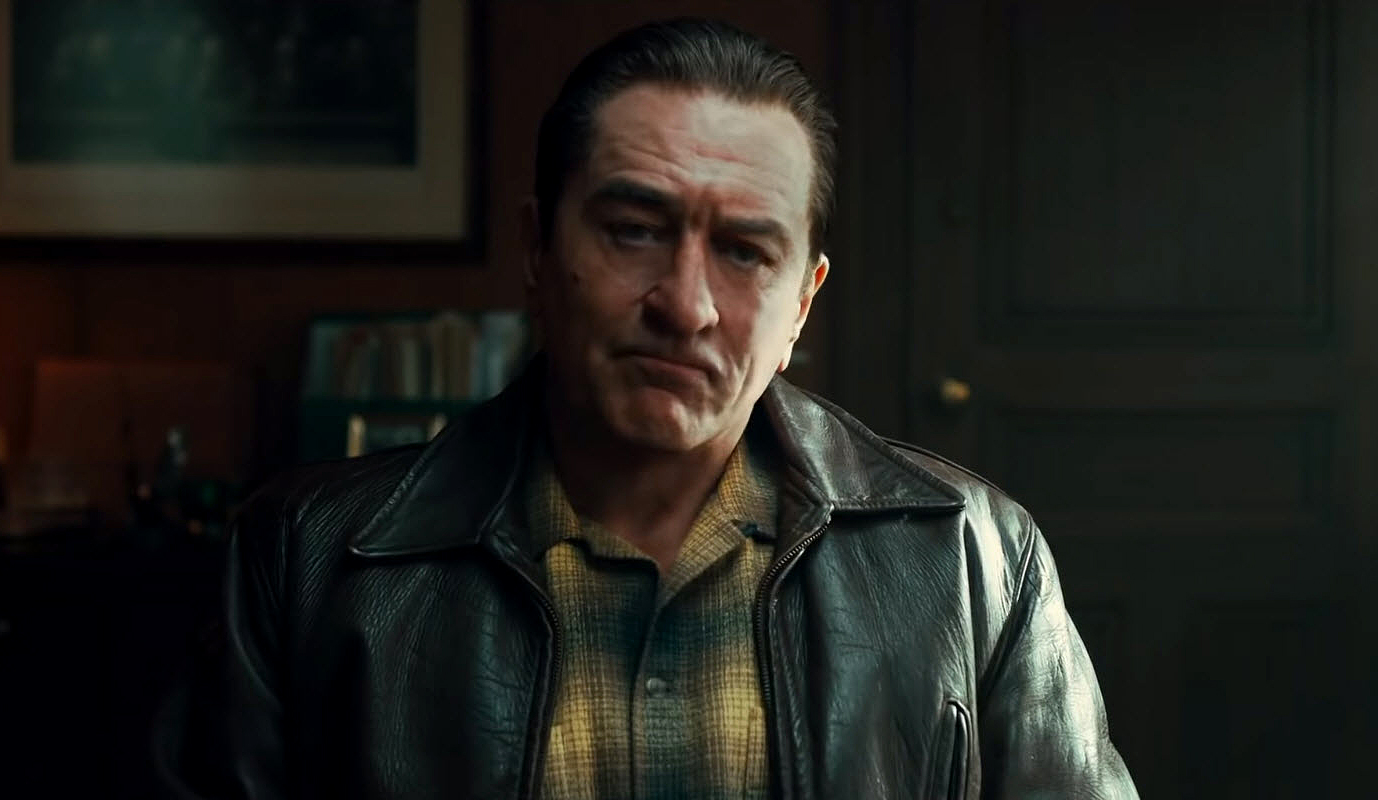 The Irishman, based on the memoir of a former investigator, has been in development for nearly a decade. But Scorsese refused to rush the final product because he wanted to perfect the groundbreaking effect. The process is called “de-aging,” i.e., the actors look younger onscreen, Curious Case of Benjamin Button-style, with the help of ultra-technical (and $$$) computer imagery. The 76-year-old De Niro, in particular, goes from smooth-faced World War II soldier to wrinkled, white-haired octogenarian. The minimally distracting CGI enhances the grand scope of the story. The de-aging is especially constructive in the stellar third act when this once-feared tough guy devolves into just another senior citizen who must come to grips with both his actions and his mortality.

Nobody expects The Irishman to be the funniest film of 2019 next to Good Boys. And yet screenwriter Steven Zaillian (Moneyball) crams plenty of crackling wit in his dialogue-heavy script. (And to his credit, he refuses to use clichéd mafia terms like “whacked” and “fugghedaboutit.”) Some of the humor is dropped in as a comic relief amid the tension, such as a bit about smelly fish in the car en route to a hit or the spiking of alcohol in watermelon during an important sit-down. Sitcom vet Romano, not surprisingly, also elicits laughs playing De Niro’s put-upon attorney. But in my screening, Pacino once again stole it. As Hoffa, nobody offers him an ice cream sundae he can’t refuse. 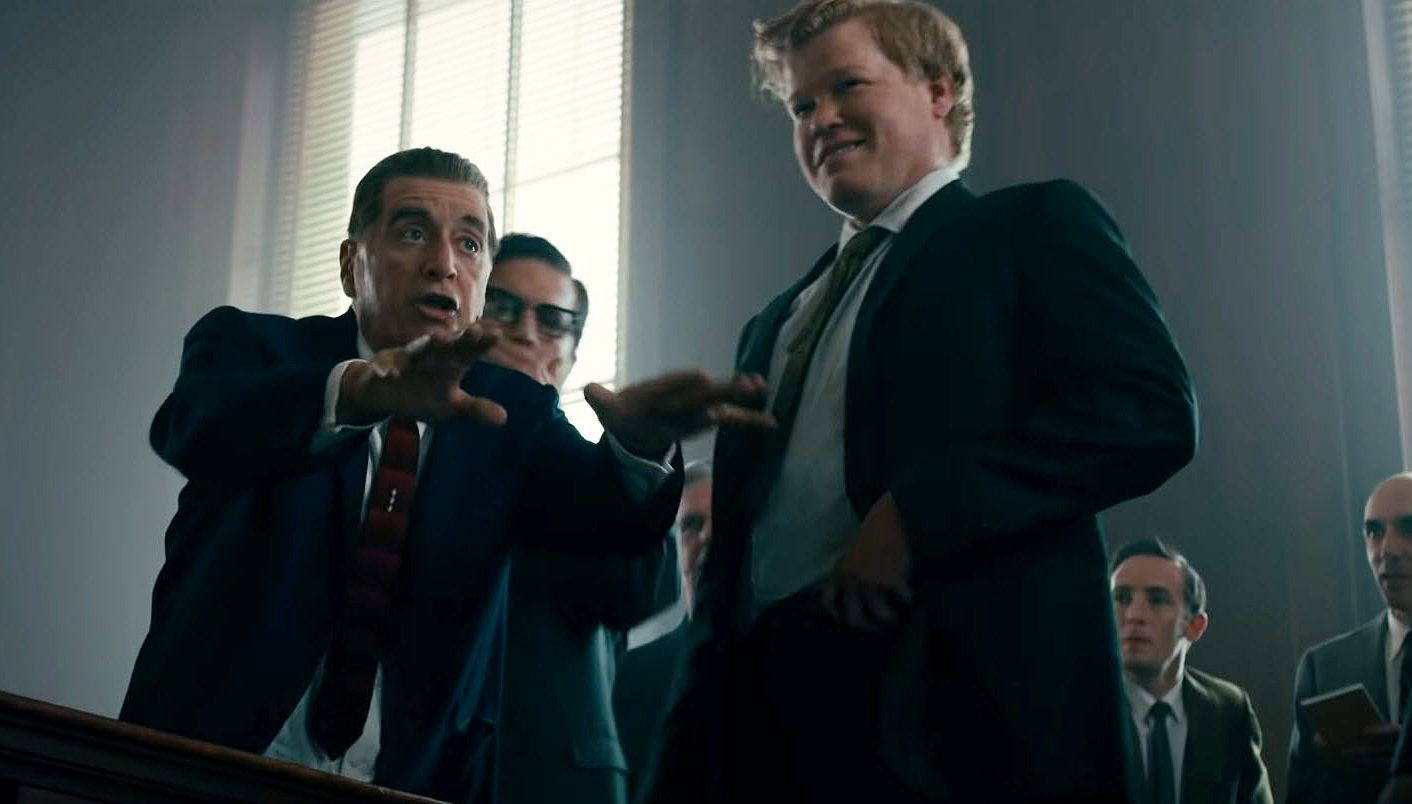 Fast and furious epics aside, Scorsese has also helmed an array of exquisitely meditative dramas. (His most recent work, 2016’s Silence with Adam Driver and Andrew Garfield, is a prime example). The Irishman shows him working out of both lenses. Sure, we do see the violence, as Pacino introduces himself to De Niro with the line “I hear you paint houses” — a wink-wink acknowledgment of the blood that splatters onto the walls post-shooting. But what’s striking about this work is the introspective spirituality that runs through the narrative. This isn’t Ray Liotta declaring “My whole life I wanted to be a gangster!” like in Goodfellas. De Niro is conflicted about his role in the untimely death of others, right up until his last breaths.

Even five years ago, it would have seemed like a mind-boggling impossibility that this kind of grand-scale movie would be available to stream just three weeks after its theatrical release. And given that the average ticket cost is about $20, how oh-so-tempting to just hold out for the Netflix and Chill. Still. Watching The Irishman, you can’t help but muse that this could be a last hurrah of sorts for this combination of talent. Consider that five years from now, Pacino and De Niro could quite possibly be playing Marvel super-villains that battle the Guardians of the Galaxy in a streaming series. The Irishman may not be a Best Picture-worthy masterpiece, but it’s your duty as a movie-lover to see these legends up where they belong. Time, in this case, is not on our side.

The Irishman, which had its world premiere at the New York Film Festival, will be in theaters on Friday, November 1, and available to stream on Netflix on Wednesday, November 27.