Daily, biweekly and weekly shows deliver kids the news at their level, and help contextualize the world around them. 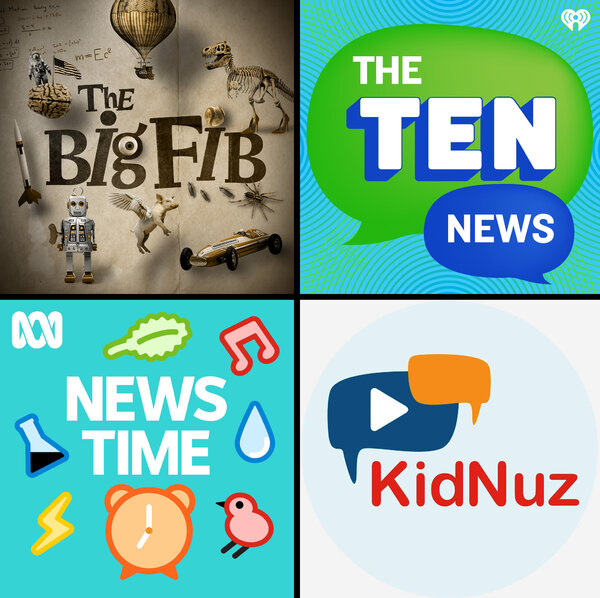 What do children make of the day’s headlines? The endless deluge of news is staggering and tough to get a handle on, even for grown-ups. And with disinformation packaged as journalism rampant on social media, there is an urgent need to help kids tell the difference between truth and propaganda. These news podcasts are perfect for young people seeking a better understanding of what the adults are fussing about and for parents who want to help their children learn how to engage critically with the world around them.

Want to develop a daily news habit in your children? “KidNuz” is what NPR’s “Up First” might sound like if its target audience was 14 and under. Without any of the whacky bells and entrancing whistles that can often give children’s programming a cartoonish quality, the broadcast journalists behind this podcast deliver accessible summaries of the news of the day. Every weekday morning, expect a seven-minute episode filled with age-appropriate stories from the world of politics, science, sports and entertainment. Each report ends with a flash quiz on the details delivered in the episode to encourage close listening, and the website features plenty of resources for educators and parents to keep the learning going.

In 10 minutes or less, the episodes of this current affairs show feature “the stuff grown-ups are talking about, explained, and way more fun.” “The Ten News” tackles things like Supreme Court nominations, the Postal Service, presidential debates, poll worker shortages and the gender pay gap in sports. The host, Bethany Van Delft, breaks down the topic du jour to the basics, giving preteens the background they need to understand why that day’s news matters as well as the context to better help them develop informed opinions of their own. New episodes air every Tuesday and Thursday.

In each weekly episode, the Australian Broadcasting Corporation reporter Ruby Cornish counts down five news stories with the aid of preschoolers whom she calls her “news helpers.” While the show focuses mostly on the lighter headlines for 6-year-olds and under (think awesome animals and young inventors), it also offers deft summaries of the world’s more serious stories. But the show’s real strength is in how it lets kids explain the big news of the day from their own points of view. For example, in June, “News Time” gave a breakdown of the Black Lives Matter protests that was delivered by the news helpers themselves, who explained in their own words what the words protest, racism and movement mean to them. The show still manages to be full of silliness and surprise and encourages curiosity in the world around young ones.

How do you raise a judicious consumer of journalism in the golden age of misinformation? You get a sassy robot to host a fact-or-fiction game show, of course. Every week on “The Big Fib,” a show for ages 7 to 12, the robot L.I.S.A. (“Live In-Studio Audience”) and Deborah Goldstein, the show’s co-host and executive producer, introduce a young contestant of the week to two adults, both claiming to be experts in a particular subject. But one is an impostor. The players must weigh the information given to them, ask smart questions and use reasoning skills to determine who is the real expert and who is the liar. The podcast, previously known as “Pants on Fire,” keeps the subject matter fun and family-friendly. Topics have included “Bread,” “Hip Hop,” “Puzzles” and a perennial kid favorite, “Toilets,” in which a 9-year-old named Theo has to figure out whether a civil engineer named Gloria really created a solar-powered toilet, or if the other grown-up in the hot seat, Joe, is really an expert plumber. It’s a goofy premise that nevertheless shows children how to be good skeptics and equips them with the critical-thinking tools they need to interpret the world around them.

Join The New York Times Podcast Club on Facebook for more suggestions and discussions about all things audio.